I really enjoy swimming, but there’s one thing that I’ve been missing: music!  When I run, I always listen to music when running solo.  In fact, if my iPod is dead, I’ll delay my run until it’s charged!

That’s why I was so excited to try out a MP3 player during my swim.  Everything was totally waterproof – neat, huh? 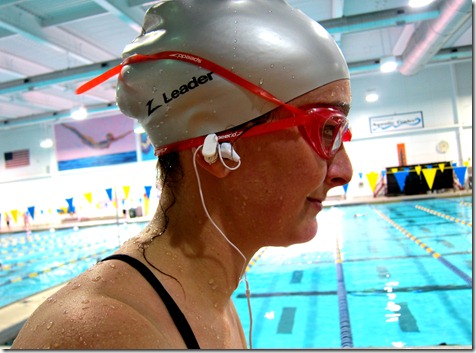 Swimming with music was very motivating.  Swimming can be a little monotonous, and music made the 1,200 yards go by so much faster.

DadHTP gave me the Nu Dolphin MP3 player for my birthday.  It came with waterproof headphones, too. 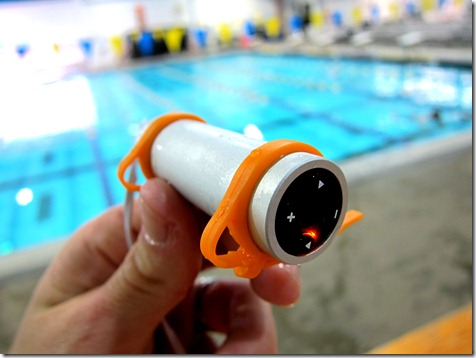 The idea is that you run your goggles through the orange straps and wear the device close to your head.  I thought this was a little weird, though.  And I’d have to take my goggle straps completely off on one side and put them back on… I opted to tuck the device into the top of my bathing suit instead.   The device also came with little clips to attach the ear bud wires to my goggle straps, which you can see in the first picture. 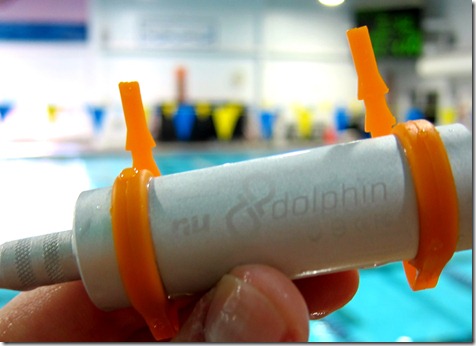 At first, swimming with ear buds were a little awkward, but I adjusted.  The sound was MUCH clearer than I thought it would be.

I can’t wait to use the MP3 player on days I need that extra little motivation – like today.  I probably won’t swim with music every time because I definitely cannot swim with music during my triathlon – it would be too unsafe!  Other swimmers would swim over me; I’d never hear them coming.  Plus, I don’t want to use music as a crutch during swimming.  I want to be strong on my own.

When it comes to running with music, people always love to debate whether it’s “right” or “wrong.” Old school runners believe it gives you an unfair advantage.  Music lovers say it’s a fun distraction and makes training more enjoyable.

And since race directors have to pay for extra insurance if they explicitly allow ear buds, most will officially say “no music” and look the other way (plus, it’s virtually impossible to enforce such a rule).  Some races take the rule more seriously, actually disqualifying everyday runners who have ear buds in – not just elites!

Check out this great Runner’s World article on the pros and cons of exercising with music.  Two fun facts from the article:

Do you listen to music during workouts?  Are you in the “no music” camp?