No matter how many races I run (this was #29), I learned something every time.  That’s one of my favorite things about racing.  Every race is unique. 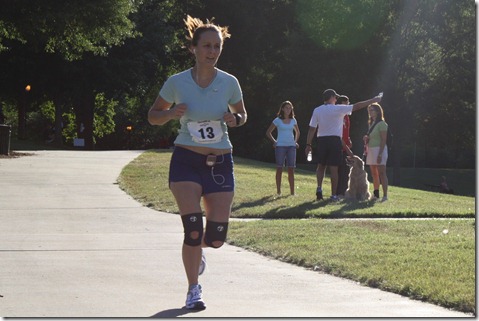 In case you were wondering… bib #13 is unlucky.  Very unlucky.  I almost wish I could blame this lackluster race on my own training because the results would be easier to accept… instead, the issue was that the course was poorly marked and myself and about 10 other runners (including Anne) ended up getting LOST! 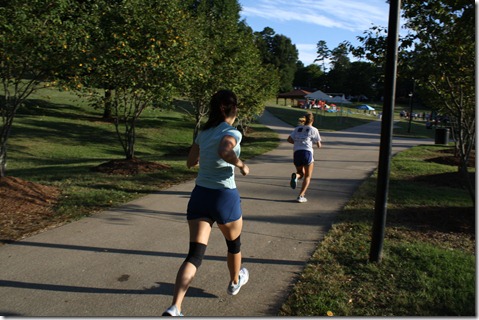 But today was still fun, and I finished in a good time.  All races are good races because I’m RUNNING!

Let’s start from the beginning…

Woke up around 6:05, showered (yes, I shower before races!), and grabbed a light breakfast. I had a piece of PB toast with 1/2 a banana: 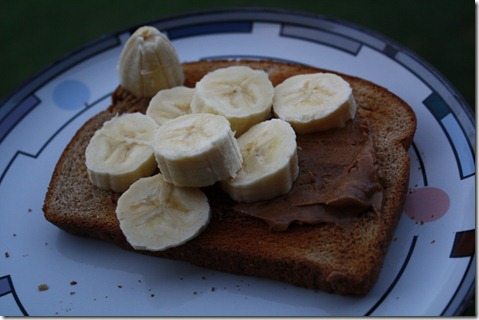 The Husband, my BFF Sarah, and her Husband TK accompanied us to the race.  It was nice to have fans! 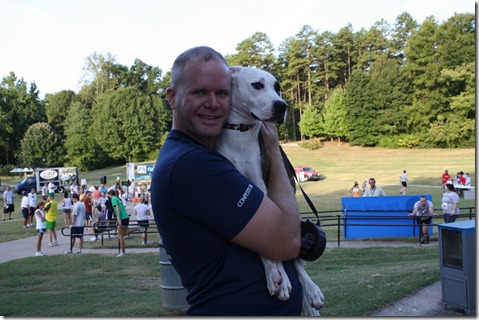 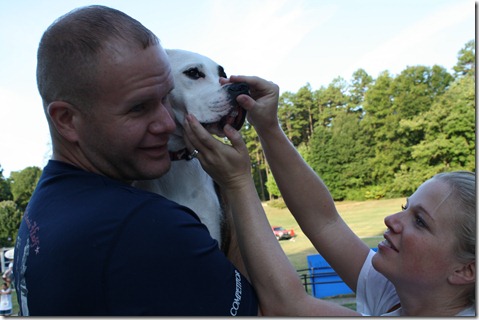 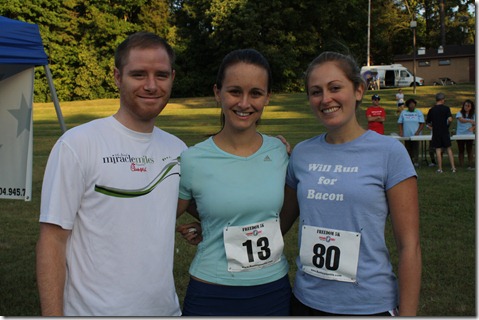 Anne and I had picked up our bib numbers and shirts the night before, so all we had to do was pick up our chips.

The race was very small – under 150 runners – and chip pick-up was a breeze. 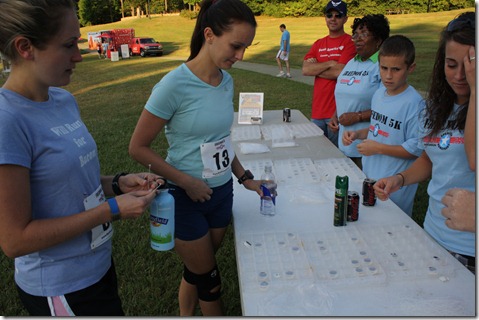 Then it was time to line up at the start!

The race benefited the military support group Operation Freedom so a Vietnam veteran, who was a POW for 7 years, gave an inspiring and funny speech before the start. 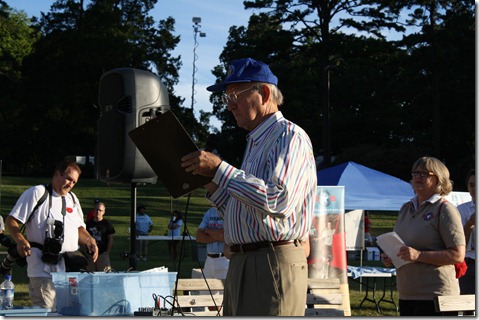 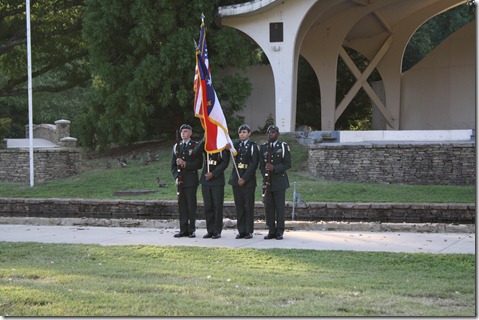 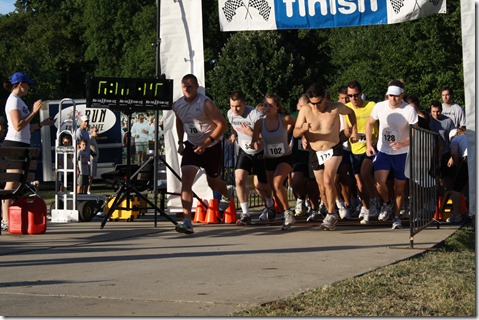 I took off like a bat outta you-know-where.  It was a completely unmaintainable pace, but I knew I needed to create as big as a deficit as I could at the beginning of the race because NO MATTER WHAT, I was going to slow significantly by the third mile.  I was running for a sub 23:46 race, so I tried to maintain a 7:00-mile for the first lap around the lake.  I actually hit 5:30 at one point!

It was HARD.  My stomach was in knots! 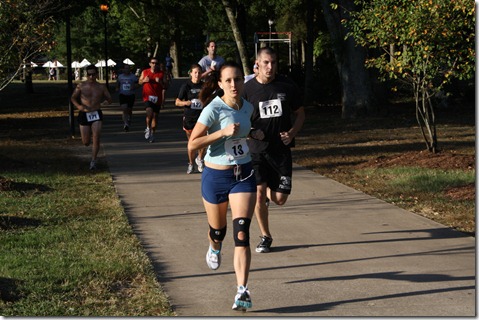 I wrapped up Mile 1.0 in 7:16 and was feeling really good when I turned the corner.

Anne was right behind me! 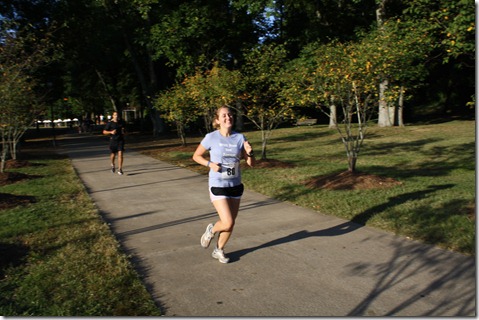 I tried to hold onto my lead as much as possible as I approached the halfway part.  My stomach was churning from nerves, excitement, and the breakneck pace, but I just kept running.  I could feel myself beginning to slow down a bit as I came up to the water station.

I grabbed a drink and pulled into the grass to walk while I chugged.  Then, I took back off! I came up on Mile 2.0 at 8:03 and was pleased.

After Mile 2, the course doubled back and began to go back through the park, but on a different route.  Anne came up behind me and urged me to keep going.  She yelled, “HANG ON!!!” and sprinted past me.

That’s when it happened…

Although the course was well-marked up to this point, there was a fork in the trail around Mile 2.5.  The right turn took you over a bridge and back to the lake (where the finish line was).  There was no volunteer or cone at the intersection, and a bunch of the runners in front of me (the lead pack) took the right turn.  I had looked at the course map briefly online and a little voice in me screamed, “This isn’t the right way!!” But I began to doubt myself and followed the group.  Right when I got over the bridge, I knew we had made a wrong turn.

All the energy left me immediately.  I stood completely still on my bridge for at least 10 seconds (no one was with me) trying to figure out what to do.  I decided to just continue around the lake because my chances of PRing were already shot.

That’s when the lead pack figured out they were also going the wrong way.  It was SO sad to watch!  Everyone who had been doing so well had to turn around!  🙁

Anne crossed the finish line right before me. 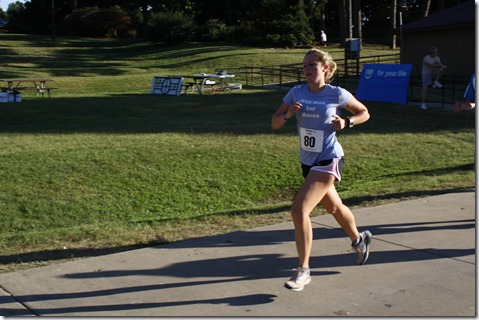 And then I came in… a lot slower than I would’ve otherwise.  I just didn’t have it in me to sprint when I knew I was crossing the line 0.1 miles early. 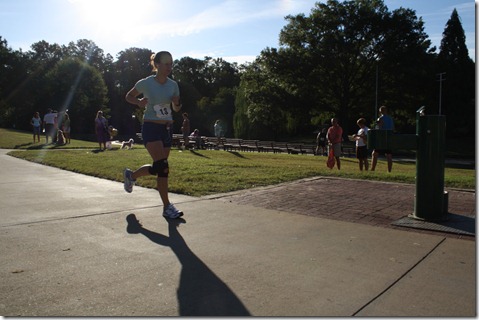 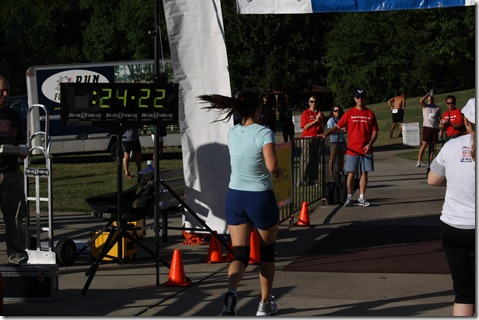 It was disappointing, but… like I said, you learn something from every race.  Today’s lesson: STUDY THE COURSE MAP because the course might not be properly marked or staffed.  I should know the route like the back of my hand, just in case! 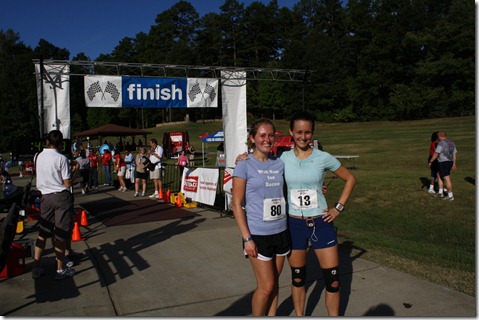 And actually, Anne and I ended up running another two slow miles after we finished to round it up to an even 5.0 miles.  I love other long distance runners who understand the need to squeeze in mileage on the weekends.  🙂

Post-race, we grabbed Starbucks.  The first PUMPKIN SPICE LATTE of the season makes it all better! 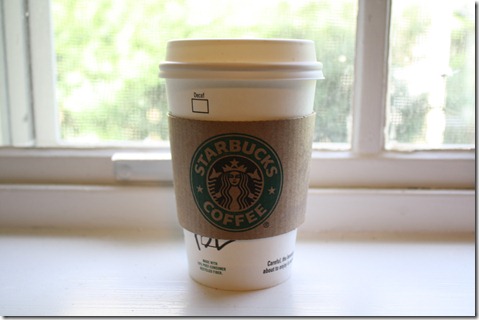 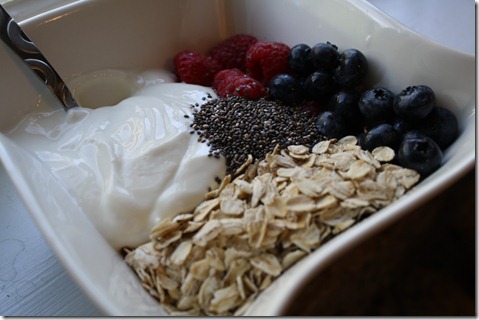 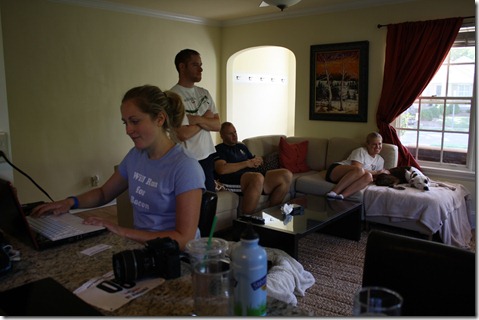 And you know what?

I’m going to redeem myself by signing up for another 5K that takes place NEXT Saturday.  I WILL be studying the course map and setting a new PR.  Go big or go home!