Without a doubt, that was the most grueling, exhausting, and amazing race I’ve ever done! 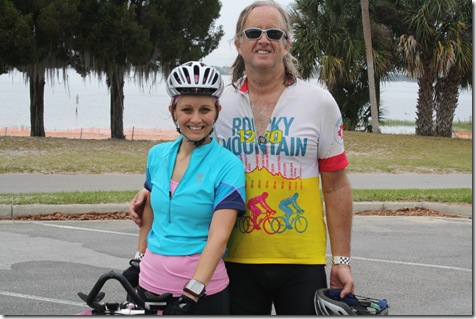 Sugarloaf was 62 miles of rolling hills. I climbed, I cried, I conquered… It was physically painful in many places, but I held on mentally and finished strong!  All in all, it was a great prep ride for next month’s Century in Napa Valley (That’s 100 miles!).  And it reminded me why I love endurance events!

Our day started bright and early.  I fueled with my normal pre-race meal (almond butter sandwich and a banana). 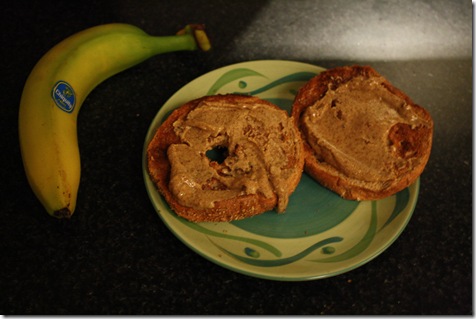 Megan, Mark, and a reader named Kristen came to do the Half Metric Century (30 miles), and Ashley did the Metric with my Dad and I.  We all met at my house this morning and drove to the race start together.

Packets for riding events are a little different than they are for running events.  No chip timer (it’s a “recreational ride” – hahah, the irony) and no bib numbers.  But we did get a nice shirt! 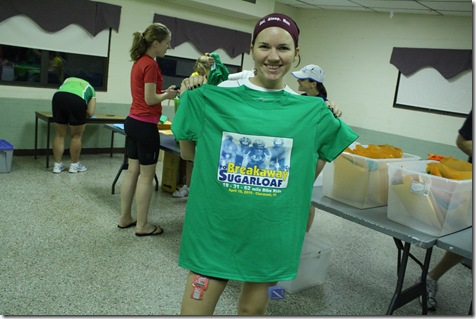 And then we got suited up and on our bikes!  When it was time to go, we just all started to pedal.  No mass start, no banner, no loud music.  Just a bunch of crazy people who love to spend hours on the bike!  🙂

The Metric Century (Dad, Ashley, and I) group started first.  I am actually a pretty slow cyclist (if I’m not putting in a lot of effort, I easily drop down to 14 mph) and my Dad and Ashley are REALLY fast.  I spent a lot of the first 10 miles staring at their butts!  My speed issues are compounded by the fact that I’m 6 incher shorter than Ashley and a foot shorter than my Dad! 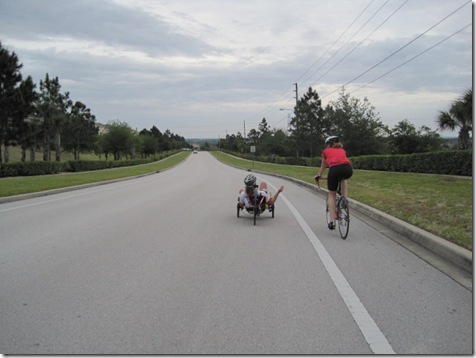 They dropped back every now and then to say hello, though! 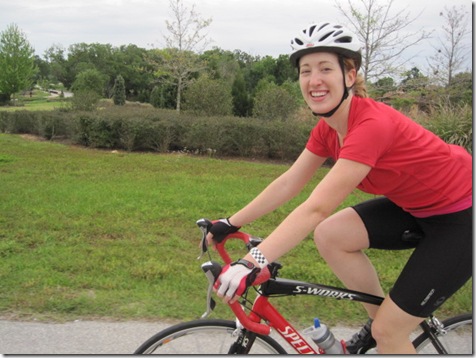 Right away, I noticed my legs were TIGHT.  Maybe it wasn’t the BEST idea to run a 8K race yesterday morning?  :)  I definitely did not have the freshest legs!  I prayed and prayed they would loosen up a little bit, but the pain was definitely compounded by the face that I was already working hard to maintain a decent pace. 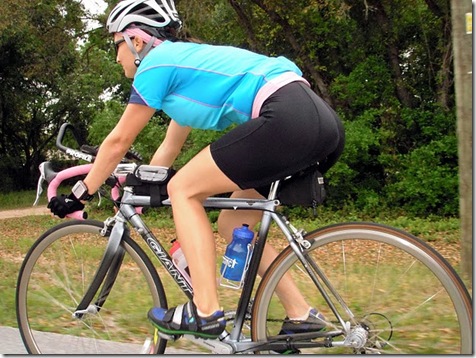 The course was BEAUTIFUL (and the hills didn’t get very intense until after Mile 20).  It was a very outcast day out, too… Perfect cycling weather! 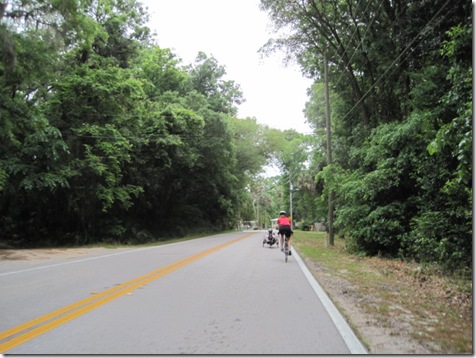 Over the course of the 5 hour, 13 minute event, I took in approximately 1,200 calories.  I get extremely hungry when I do endurance events, and I absolutely have to take in food or I get faint and weak.

The first aid station came up around Mile 16.  I was super excited for a break and some fuel! 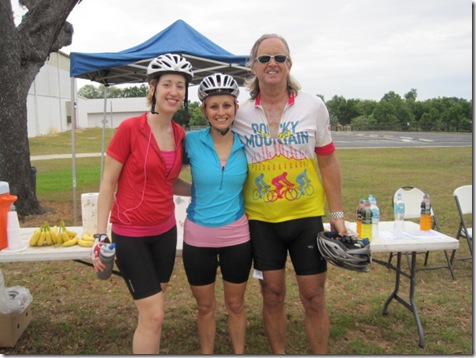 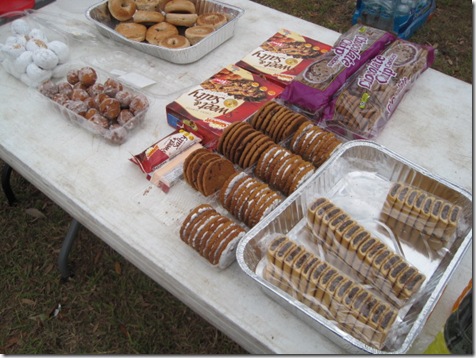 I love the junk food at cycling events!  All you really need is glucose, after all!

I opted for two Fig Newtons and one of my packets of organic Goo: 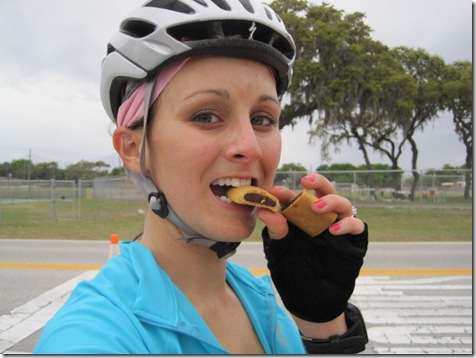 Around this time, I began to think, “I cannot believe we’re only 1/4 of the way done!”

But we rode on… 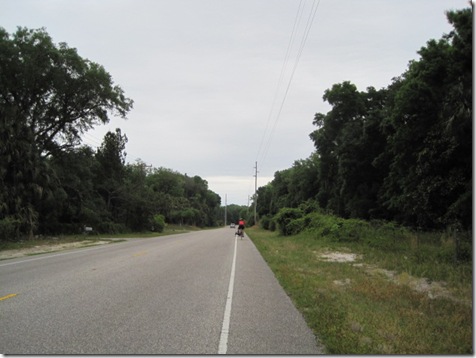 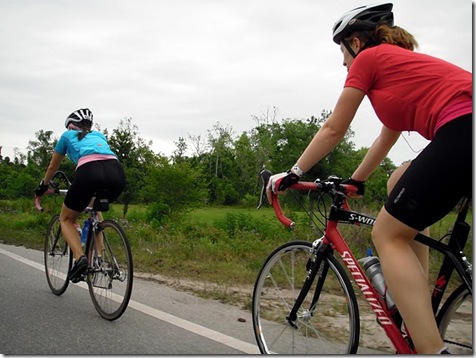 Then, the hills started.  I wish I could fully explain how hilly the course was.  Clermont, Florida is renown for it’s hills!  Did you know the USA Triathlon National Training Center is in Clermont?

The hills really started to suck away my positivity.  It was SO hard, and the hills felt never ending.  No breaks.  Around every corner was another hill!  I started to complain aloud (which, of course, means you’ve been having an internal breakdown for at least 20 minutes), and Ashley gave me a great pep talk.

She said, “Remember you’ve done a Metric before; you’re experienced in racing.”  I told her I was dreading the infamous Sugarloaf Mountain at Mile 49 and she reminded me that it was fruitless to obsess about something that was two hours off.   She also said, “Remember when you did your first half marathon and you couldn’t imagine running the distance twice over?  You can do anything you put your mind to!”  It really helped build up my confidence to think of all my previous races.

At Mile 30, we came upon the second aid station. 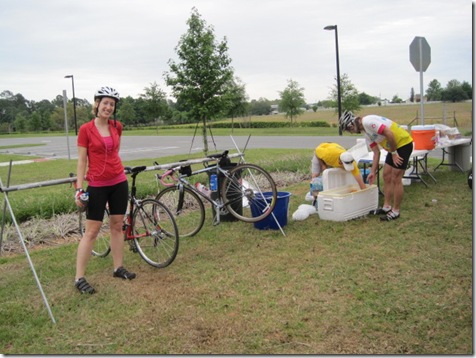 I tore into a 400-calorie ProBar that I had stashed in my jersey.  I love this flavor. 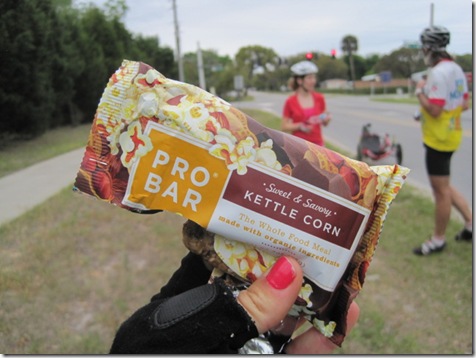 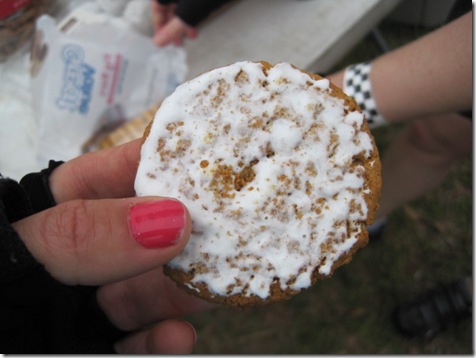 It started to rain on us around Mile 35.  Everyone got a little nervous because we’re not experienced cycling in the rain!  I was so paranoid that I would wipe out at the bottom of a hill and began to lean on my brakes a little more.

And at Mile 40, I had a complete physical and emotional meltdown.  I yelled out, “I need a break!” and we all stopped on the side of the road so I could rest for 5 minutes.  The hills and rain were really getting to me, and I knew I would feel 100% better if I just gave my legs a break.  I also took another packet of Goo.  Sugar never hurt any athlete! 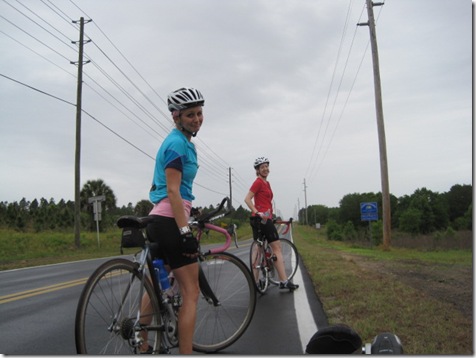 We started to pedal again, and then we came across the infamous… 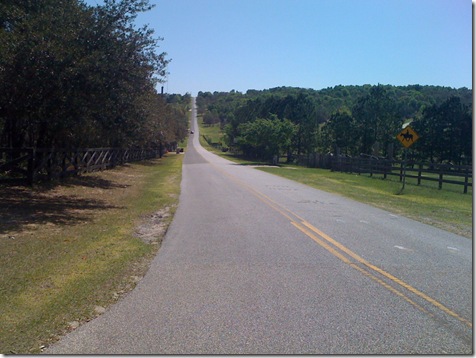 This picture is from the first time I tackled Sugarloaf.  It was a lot easier to go up the hills when I’d only ridden 15 miles before!  This time around, my legs were barking less than halfway up the infamous hill, and both Ashley and I got off our bikes to walk it to the top. 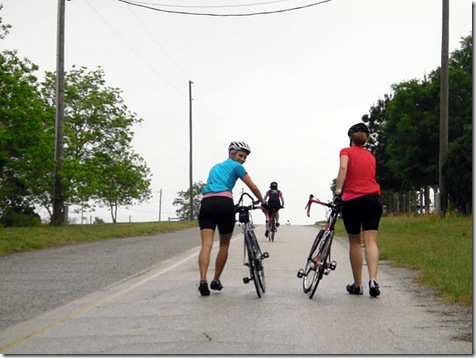 We were still proud when we finished though! 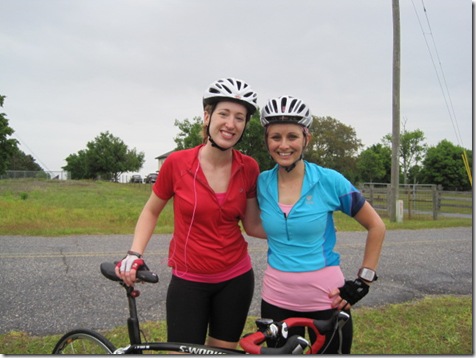 I was especially excited to see another rest stop!  This time, I went straight for the donut holes.  I ate four before I even knew what had happened! 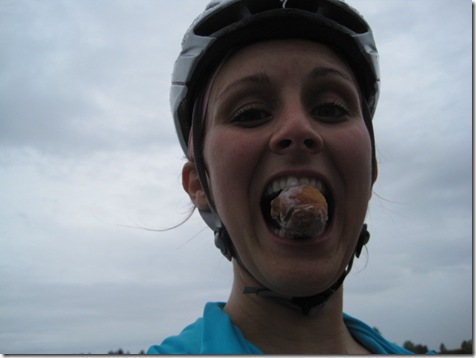 After the last aid station, we only had another 13 miles until the end.  It felt SO close to the finish, although it took at least an hour! 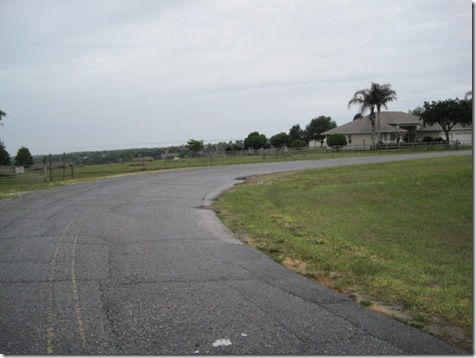 There were so many rolling hills in the last five miles that Ashley complained she was going to have a “discussion with the lunatic who designed this race course.”  I felt the same way!

And then, with just as little fanfare as the race began, it was over!  I was SO relieved to pull back into the parking lot! 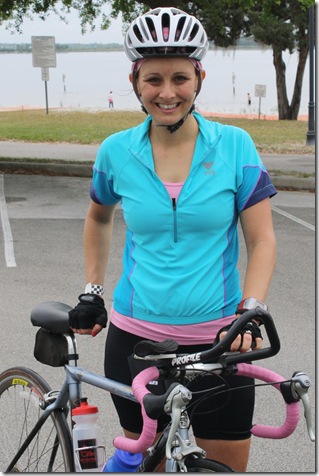 Fun facts:  this race took me 19 minutes more than my marathon!  It felt harder, too!  And this is my second Metric Century, but it took more 40 minutes longer than my first one, which was PERFECTLY flat.  Go figure!  It was a VERY challenging course.

I’m so glad Ashley and my Dad were there for the experience.  We had so much fun together, and I really appreciate how they both motivated me when the going got tough. 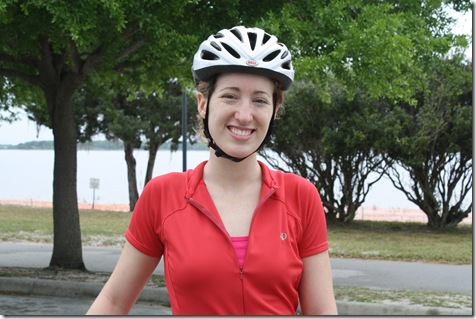 One major lesson learned at Sugarloaf:  I really, really need to put the pedal to the metal with my training before I attempt to ride 100 miles in May.  This race was so challenging, and it motivated me to re-attack my training plan with gusto.  I’ve been struggling with motivation lately, but there’s nothing like a grueling race to slap you back into reality.  I want to feel prepared for the Century!

We said our goodbyes to Ashley, and then Dad and I met up with the Husband for lunch.  Even though I had taken in about 1,200 calories during the race, I was positively starving by the time we sat down to eat at a cute little downtown restaurant called Dexter’s.

I started off with a beer: 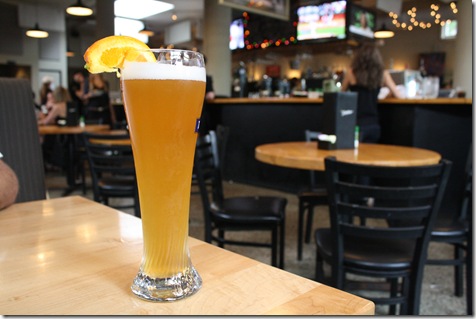 Truthfully, I had been fantasizing about a cold wheat beer since Mile 10.

And a side salad: 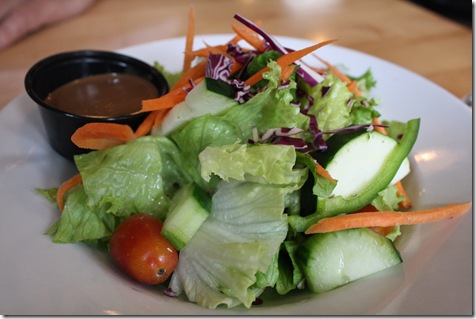 For my entree, I inhaled this delicious grilled veggie sandwich.  I asked them to add goat cheese, which added something so special to the dish. 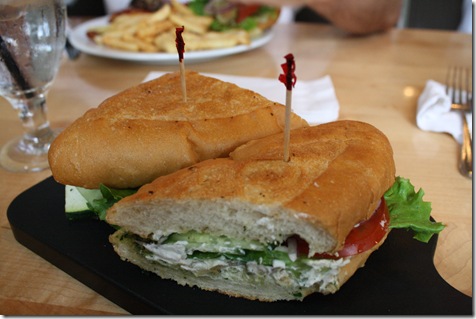 The Husband and I split these fries: 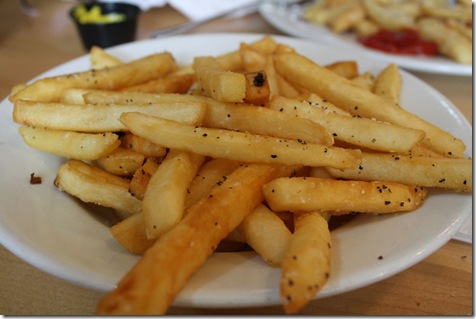 Now, I am home and feel PROUD and EXHAUSTED.  I want to curl up on the couch and snooze away the evening.  :)  Oh, and eat more!  My appetite is callin’.

“There will come a day when you can no longer do this. Today is not that day.”