Hi guys!  I have an early morning flight back home to Orlando, but I wanted to share two things with you:  information about the Team in Training Bake Sale and two running success stories!

As you all know, I am training for the Disney Marathon in honor of my friend Megan, who is currently fighting her second bout of leukemia and is in the hospital receiving chemotherapy as you read this.

At the Healthy Living Summit, attendees will be able to bid on the following delicious treats.  All money raised will go to my Team in Training fund and the Leukemia and Lymphoma Society.  Give these bakers a HUGE pat of the back for helping!

Raya from Raya Runs sent me this awesome story of her first 5K: 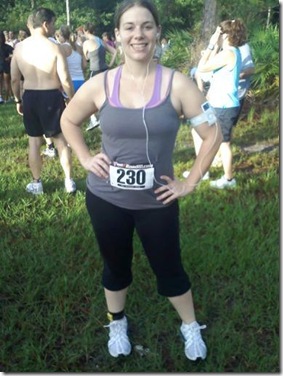 Raya said, "The only goal I had in my head was to run the whole thing and not walk at all, but at the 2 mile mark I walked for about a minute. I also walked again around the 2.5 mile mark. I wasn’t being lazy, I just didn’t feel well. My legs were heavy and I don’t know if it was the super duper humidity or what, but I was feeling that dizzy/I might pass out feeling. Hate that!

I am proud that I finished, and I did finish strong! When I saw the 3 mile marker and I knew I was almost there, I took every last ounce of energy I could find and pushed. I actually passed several people at that point.

How do I know I pushed myself to the max? Because as I was nearing the finish line, I had that “I reeeeally might throw up” feeling. (I know, it’s so gross, but clearly I was workin’ it!)

My mom and my sister had gotten up early to come cheer me on, so they were waiting for me at the finish. It was nice to see familiar faces!"

Catherine Races with Her Mom!

Catherine wants to brag to you all about her wonderful and athletic mom!  🙂 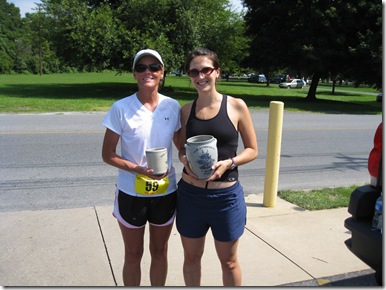 Catherine said, "My mom used to run track & cross country in high school but stopped afterwards to have my older brother & me.  She kind of got into it again in her 30s but had hip issues so she stopped.  Last May she decided to get back into it because a friend wanted her to join her on her 3 mile runs.  I remember when my mom called me after her first run complaining that she could barely run 15 minutes without stopping.  I encouraged her to keep running by telling her that it’ll get easier.  She decided to do this 5 mile race with her friend & had me create a schedule for her.  She diligently followed the schedule & ran 44:xx for her first race!

Well, this only fueled her desire.  She began to run longer & faster but got a small injury.  It was nothing major but she took 2 weeks off.  I think this happened back in November & since then she’s done wonderfully.  We competed in the Cherry Blossom 10 miler in D.C. in April, & she finished in 1:31 @9:10 pace.  Then in early June we ran a Women’s Distance Festival 5k in my town in Maryland where we won the Mother Daughter Team award.

Next up is the Freedom’s Run Half Marathon near Harpers Ferry, WV on Oct. 3.  I convinced her that if she could run 10 miles then she can run 13 so this time I’ll actually be running with her.  The course is very hilly so her goal is to just finish.  Anyway, I just wanted to brag about my mom.  My mom went from barely being able to run 15 minutes straight to running 10 miles without stopping!