Hi everyone!  Sorry for the delay.  It’s been a very vacation-y morning.   :)  Lots of relaxing and napping (yes, already).

I never really ate dinner last night (tummy troubles), so I woke up positivity starving and wolfed down toast with almond butter and watermelon. 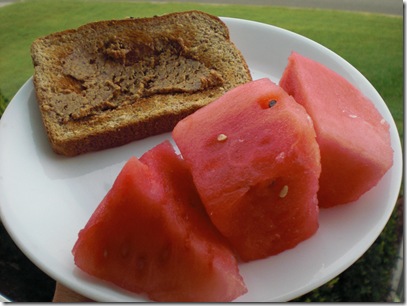 I thought I was going to go for a walk/run with my mom, which is why I just had a snack.   But when she woke up, she said she was feel too sore from last night’s hike so we just hung out instead.

I also had a little more breakfast: 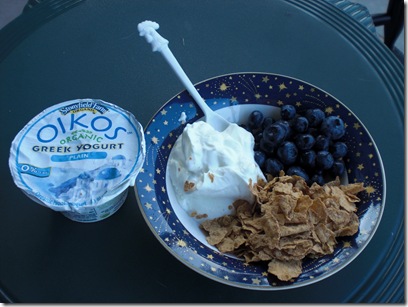 I ate about 2/3 of this Oikos, blueberries, and cereal combo.

I just had a cup of veggie soup with some crackers to prepare myself for our 12:00 Yoga class: 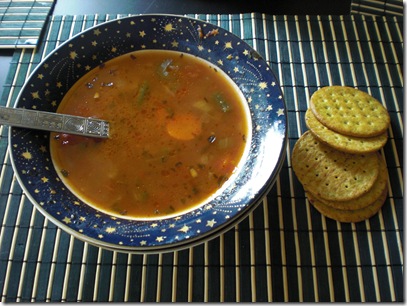 I can tell my mom used the blog to buy all my favorite foods — Oikos yogurt, Wolfgang Puck soup, blueberries…. I love her!

Eliza wrote to tell me about her first half marathon, and her story was so inspirational that I asked if I could share it on the blog!  She said YES! — read on!

Eliza said: I finished my first half marathon this morning! My little brother ran it with me. The first 6 miles were huge hills (Vermont is pretty hilly), and I think I pushed myself a little too much early on. My brother and I ran together for the first 4.5 miles, and then I let him take off because I could tell he was itching to go faster. 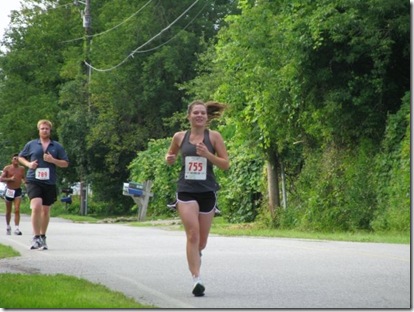 From mile 6 to about mile 8 there was a father-son team behind me. I could hear them talking- the dad kept making his son do multiplication tables to distract him! They got closer and so I asked if they were going faster or I was going slower- they said they were doing 9-minute miles the whole time. I was pretty surprised because that meant that we were really pushing it in the beginning! My goal was only 10-minute miles, and I thought that was a stretch so I was telling everyone my goal was just to finish by 2:30:00!

The last 3-miles were torture. It was on beautiful paths through the woods, and until about mile 12 I didn’t see anyone (it was a small race!).  I did have to stop a few times to rest, my feet had started to hurt and my quads were pretty tight  The last 3/4 of a mile was a straight, flat, paved road. But for some reason it was the hardest part! At one point I just stopped in some shade, and this older man, maybe age 65, came up and just said "No! come on!" and I ran with him the rest of the way, just concentrating on matching my breathing to his. 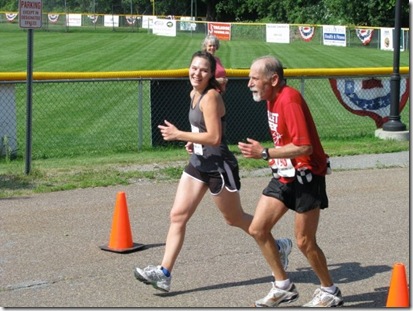 I finished at 2:06 and some odd seconds, and my brother came in at 1:56:something! (he was very proud of himself, I was a little shocked: he smoked 2 cigarettes and got drunk on Friday night! I guess that’s what being a 22-year old generally athletic boy does for you!)   It was a blast, and I’m so glad that I did it. Especially that I did it with my brother, because it was a real bonding experience for us. I’m also proud of myself for how far that I’ve come in terms of taking care of myself- I used to be a smoker and a pretty heavy party-er, and this feels symbolic of all the changes I’ve made in the past two years. 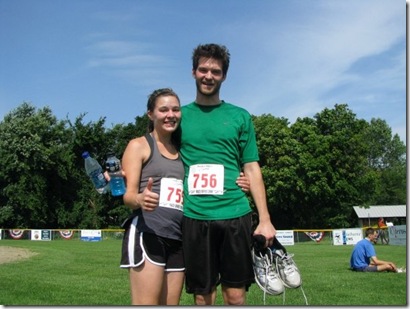 I’m not sure I’ll do another half, maybe someday. I think 10ks might be the ideal length for me, maybe 15ks. There is a marathon here in the spring that my brother and I are talking about doing in legs with one or two other people. We’ll see!

Seriously, way to go, Eliza!  What an awesome race recap.  🙂 Did anyone else compete in any races or tackle a new challenge this week?  Go ahead, brag about it.  I love to hear it!