A New Kind of Saturday

Morning, lovelies.  Last night, I had really strange nightmares.   I had graphic dreams about being chased by a creeper and having to stab him over and over again in self-defense!  He just wouldn’t die, either! And I called 911, but no one came. (But I saved Maggie and James).

I pride myself on my LACK of dreaming (I think it’s nice that my brain just shuts off), so it was highly unusual.  When I dream something so vivid, I always think it MUST mean something.  I think it means I’m tired and don’t want to go to work.  Try as I might to "end" the work week, it doesn’t WON’T DIE!  🙂

I woke up with a start and stumbled to the kitchen for coffee — now, that’s a lifesaver!  Plus banana oatmeal: 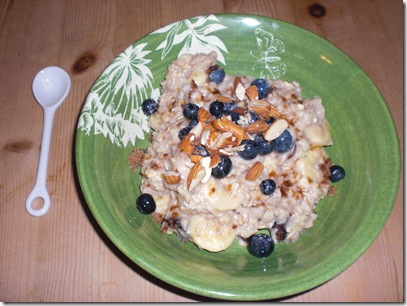 This was a delightful way to start my workday! 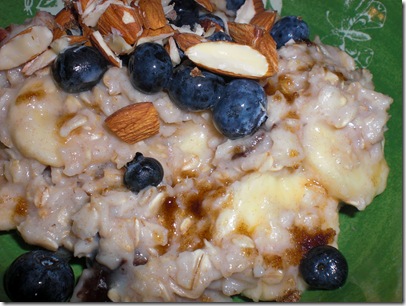 I’m hoping I’ll be able to squeeze in a trip to the gym later, but I wanted to get my blood pumping this morning as well:

It was a great mini-sweat session.

I was thinking earlier about how HAPPY I am with a reduced exercise program.  I don’t feel lazy or unfit at all, I actually feel MORE healthy.  I think 20 – 25 miles a week was really running me into the ground.  Waking up in the morning without knee pain is the best feeling in the world.

I just feel more balanced and calm than I ever have before.  Sure, the first few weeks of my break from running was a mental and physical shock, but now that I’ve adjust to the change, it’s great!

Just goes to show you that change can be GOOD! 🙂

Do you dream?  Do you think it’s your brain trying to tell you something or are you just filtering through the day’s BS?