My day is going well.  I feel MUCH less stressed than I did yesterday.  I’m trying to take my time at work and truly focus.  Feeling more in control of my work always helps.

My mid-afternoon snack consisted of mini WW toast and 1/4 cup of cottage cheese. 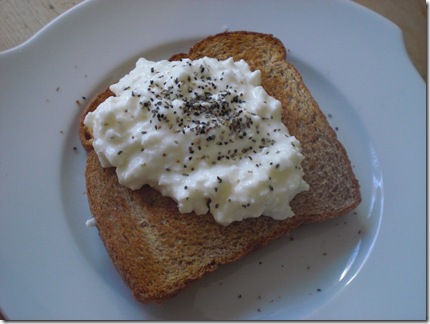 And lunch was FABOOSH! 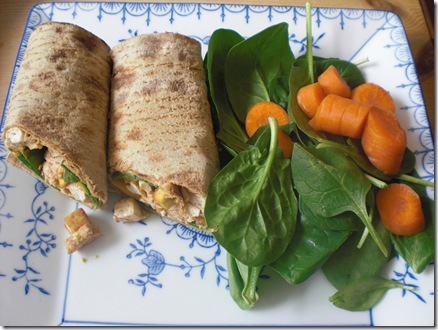 A fun tofu sammie made with the last of my Flat Out Wraps (need to buy more, these are great!) and a side spinach salad. 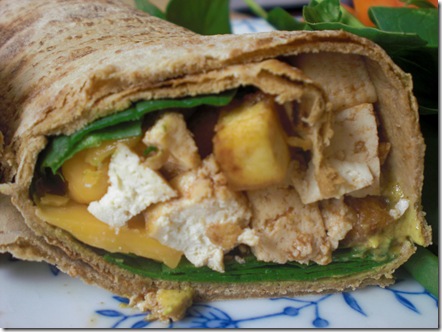 Meet Jen Perez, a professional triathlete who is sponsored by EAS, who makes yummy protein shakes and bars. Yes, this means Jen gets paid to workout (swoon!). Check out our interview below!

1. Your triathlon career began to take off your senior year of high school.  What was it like to juggle the normal teenage issues with the demands of training?  Were most of your friends active in sports, too?

It was really difficult at times to pick between wanting to hang out with friends and racing or training. It was not hard juggling school sports, because I was surrounded by my friends. Once you leave that setting, it makes it a little more difficult to stay focused. Something that helped me stay focused was to recognize all of the great things I got to do and experience through triathlon, such as traveling and meeting new people. Some of my friends had never been out of the South, but racing has given me the opportunity to go to different continents!

2. You’re originally from New Orleans.  How did Hurricane Katrina affect your training?

Yes, Hurricane Katrina put a huge damper on my training. At the time, I was attending University of New Orleans and living at home to save money so when the hurricane hit, my family and I lost everything. We were in limbo for a few months in Alabama at my grandparents’ house before I decided to follow my coach to Texas. I felt like this would also give my parents more time to concentrate on getting themselves and my brother and sister (four and five years old at the time) back on their feet. After getting to Texas, it still took me a while to adapt to losing all of my triathlon bikes, living in a new place, etc.

3. Growing up, you were involved in soccer, so I’m sure running came naturally to you.  When you first began training for tri’s, did you find the swim or the bike more challenging?  Of course, you improved through lots of practice, but do you have any other tips for tackling a sport that doesn’t come easy? Well, neither the bike nor swim came as fast as the run, obviously. I think the hardest part was getting comfortable in the water. Most swimmers have been in the pool since they where babies, so getting in at 16 years old was a little more difficult. The main advice I would give is to initially spend time in the water. This means swimming easy and just working on stroke and drills not necessarily hard efforts.

Yes, I do practice my transitions. A race can be lost in transition, but it’s not usually won there. It’s important to be comfortable with transitions so they don’t stress you out when it comes race time. 5. What’s your favorite pre-workout and post-workout snack?  Did you ever eat during long workouts?  I like Clif Shot Bloks — what do you take?

Nutrition is very important when it comes to training. My favorite post-workout snack is EAS Myoplex Lite Chocolate shakes and bars. I mean, who doesn’t like chocolate! During my workouts, I like to take EAS Endurathon, which helps fuel muscles during long and strenuous work-outs. If the workout is long, it is usually not as intense, so I can stomach something like a half of a PB & J on a long ride.

6. You’re sponsored by some amazing companies, like EAS and Polar.  I’m sure you love those products, but what’s your all-time favorite piece of gear?  Maybe it’s a particular type of bike shoes, water bottle, hydration belt?

That’s such a hard question. I guess I would have to say that my favorite piece of equipment is my bike (BMC with Profile Design parts, Mavic wheels and Maxxis tires). I mean so much goes into a bike to make it work — it’s really amazing. Plus you can’t go anywhere without them. 7. Your next big race is the Collegiate National Championships in April.  Can you describe your pre-race rituals? How do you calm pre-race nerves?

It is really hard to calm pre-race jitters. I’m getting nervous just thinking about it! I get up about two-to-three hours before the race starts and eat a healthy breakfast. Then, I go to the race setup, find my transition area, get body marked and start warming up. It took me a while to figure out what worked the best for me. It’s a trial and error process.

8.  I’ve seen people faint, puke, and fall down while racing.  What’s the craziest thing you’ve ever seen happen at a race?

I have seen all of those as well, but I think the craziest thing I’ve seen was watching fellow Team EAS athlete, Mark Weir, during a downhill mountain bike race. He got a flat tire while racing but just kept going. The last mile of the downhill was on concrete to the finish. When he hit the concrete, he was going somewhere between 30-40 mph, and his wheel basically blew up! The tire and tube were nowhere to be found, and the rim had burst in five places and bent in half!

9.  At what point in a race do you find the most difficult, and how do you pull through?

I think that the most difficult part of racing is learning how to push yourself when you aren’t where you want to be — either position-wise or speed-wise. It is really hard to talk yourself through it until the end. If you don’t push yourself, you will never what could happen or where you could end up!

10.  What’s your proudest moment to date?

I think my proudest moment to date was when I placed 15th overall and 2nd American at Duathlon Worlds in Belgium as a junior. I know it was a few years ago, but I surpassed my expectations and ended up doing better than I had hoped, making it a very memorable race.

Be sure to check out Jen’s blog!  What an awesome woman and fierce competitor!