Hello, bloggies.   How goes it?  Just about the only thing keeping me alive at this point is the knowledge that tomorrow is Friday. 🙁

Lunch was very simple and pretty low-cal.  I was saving room for a special dessert! 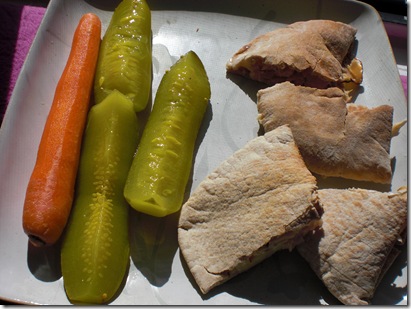 I had a WW pita sammie with turkey and melted Cabot cheese. 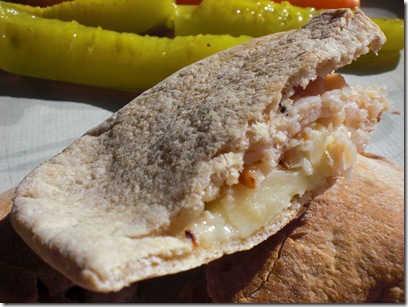 And a carrot and pickles.  Do you know how fast we go through a jar of pickles?  We crushed a jar in three days this time.  Sometimes it’s 2 days. 🙂 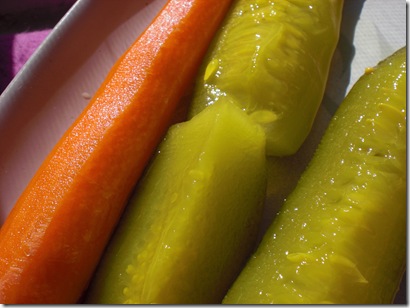 My super-special lunchtime dessert was one of the gourmet biscottis I bought last night with a cup of coffee. 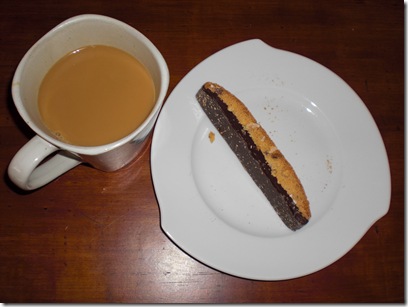 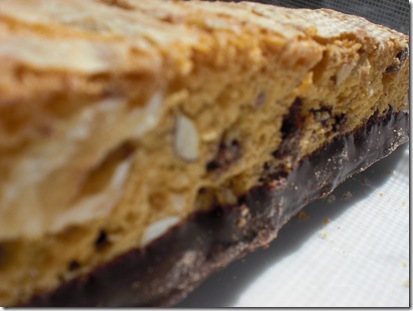 Mica from MicaPie sent me this list of Runner’s Commandments (by Joe Kelly).  I thought they were so funny (and so true) that I wanted to share them with you!

1. Don’t be a whiner. Nobody likes a whiner, not even other whiners.
2. Walking out the door is often the toughest part of a run.
3. Don’t make running your life. Make it part of your life.
4. During group training runs, don’t let anyone run alone.
5. Keep promises, especially ones made to yourself.
6. When doing group runs, start on time no matter who’s missing.
7. The faster you are the less you should talk about your times.
8. Keep a quarter in your pocket. One day you’ll need to call for a ride.
9. Don’t compare yourself to other runners.
10. All runners are equal, some are just faster than others.
11. Keep in mind that the later in the day it gets, the more likely it is that you won’t run.
12. For a change of pace, get driven out and then run back.
13. If it was easy, everybody would be a runner.
14. When standing in starting lines, remind yourself how fortunate you are to be  there.
15. Getting out of shape is much easier than getting into shape.
16. A bad day of running still beats a good day at work.
17. Talk like a runner. “Singlets” are worn on warm days. “Tank tops” are worn to the beach.
18. Don’t talk about your running injuries. People don’t want to hear about your sore knee or black toe.
19. Don’t always run alone.
20. Don’t always run with people.
21. Approach running as if the quality of your life depended on it.
22. No matter how slow you run it is still faster than someone sitting on a couch.
23. Keep in mind that the harder you run during training, the luckier you’ll get during racing.
24. Races aren’t just for those who can run fast.
25. There are no shortcuts to running excellence.
26. The best runs sometimes come on days when you didn’t feel like running.
27. Be modest after a race, especially if you have reason to brag.
28. If you say, “Let’s run this race together,” then you must stay with that person no matter how slow.
29. Think twice before agreeing to run with someone during a race.
30. There is nothing boring about running. There are, however, boring people who run.
31. Look at hills as opportunities to pass people.
32. Distance running is like cod liver oil. At first it makes you feel awful, then it makes you feel better.
33. Never throw away the instructions to your running watch.
34. Don’t try to outrun dogs.
35. Don’t trust runners who show up at races claiming to be tired, out of share, or not feeling well.
36. Don’t wait for perfect weather. If you do, you won’t run very often.
37. When tempted to stop being a runner, make a list of the reasons you started.
38. Never run alongside very old or very young racers. They get all of the applause.
39. Without goals, training has no purpose.
40. During training runs, let the slowest runner in the group set the pace.
41. The first year in a new age group offers the best opportunity for trophies.
42. Go for broke, but be prepared to be broken.
43. Spend more time running on the roads than sitting on the couch.
44. Make progress in your training, but progress at your own rate.
45. “Winning” means different things to different people.
46. Unless you make your living as a runner, don’t take running too seriously.
47. Runners who never fail are runners who never try anything great.
48. Never tell a runner that he or she doesn’t look good in tights.
49. Never confuse the Ben-Gay tube with the toothpaste tube.
50. Never apologize for doing the best you can.
51. Preventing running injuries is easier than curing them.
52. Running is simple. Don’t make it complicated.
53. Running is always enjoyable. Sometimes, though, the joy doesn’t come until the end of the run.