Booze + Oatmeal seriously belong together! How can something SO wrong be so right!? 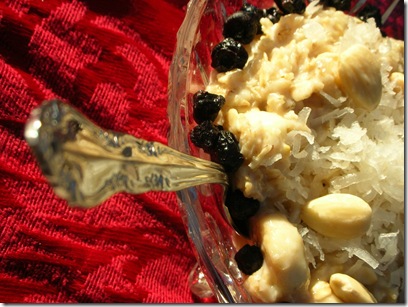 Although brandy was delicious, I decided to go a little more tropical this morning. 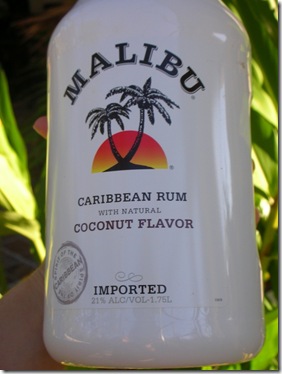 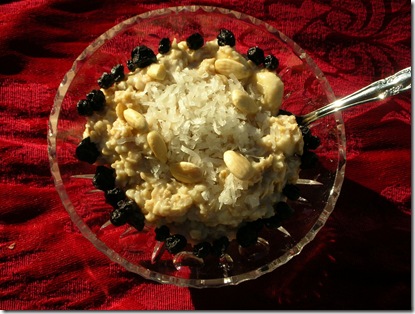 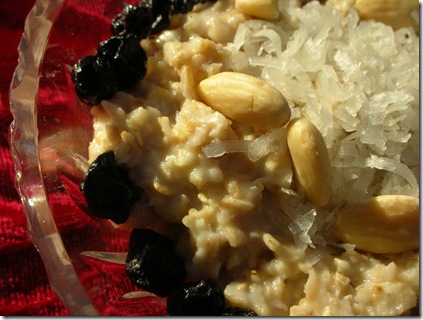 Although it’s added at the end, I’m pretty sure the rum cooks off.  The oatmeal doesn’t taste alcoholic, it just has a nice layer of complexity and a little coconutty kick!

And – this is a miracle unto itself – I skipped coffee this AM for green tea! Only because we’re out of coffee. 🙂

I’m letting Future Hus sleep in, and once he wakes up, I may go for a run.  You may be wondering why I have to wait until he gets up to leave. 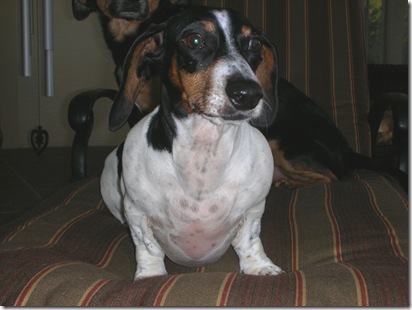 Well, little Miss Maggie is seriously attached to me.  We got her as a rescue dog when she was 2, and I think her previous owners neglected her a lot.  Now, Maggie is obsessed with me (with Future Husband, too, but not the same degree at all).  If I leave the room, she follows me.  If I walk outside to throw out the trash, she  barks frantically at the door until I come back.  She watches every move I make, and if she is physically separated from me, she freaks out,  cries, and pants like crazy.  It’s painful to watch.

She is so bad that we have to crate her when we leave the house, or else she would destroy everything in her quest to get back to Mommy.   Once we let her roam free, and she dug up the carpet near the door trying to get out.  When we come home, she literally begins to THROW herself against the walls of the crate, barking and crying hysterically until we let her out, and then she runs in circles, barking like a mad woman.  She calms down after 5 minutes (I’ve tried to wait until she calms down to let her out of her crate, but trust me – she doesn’t!).

We’ve seen dog trainers and read books, but I just cannot crack her.  The biggest problem is that she’s really, really stupid, and I mean that in the  nicest way possible.  She has bricks for brains.  One day, I should make a video of her anxiety because otherwise I cannot explain how intense she becomes – its like she has a freaked-out, one-track pea-sized brain.

The big step we’re taking right now with Maggie (and James, to be fair) is crating her for bed, instead of letting her sleep with us.  I really love letting the dogs sleep with us, but I fear it exacerbates Maggie’s attachment issues.   It’s not pretty (i.e. she screams for 30 minutes every night when I crate her), but she eventually tires of it and falls asleep.  It will be a few weeks before there’s no crying.

It would be so nice if I could just let her out of her crate and let her and James lounge around on the couch while I go for a run (if they know someone is home, they don’t destroy the house, but Maggie will bark frantically when I leave and wake Future Husband up).  I don’t know what to do because I can’t correct her once I leave the house!  I need the Dog Whisperer so badly, but I bet even Cesar Milan couldn’t get through to her!

Does anyone have any advice on how I can stop Maggie from barking her face off when I leave the house?