Three cheers for Thursday! I’m particularly excited because (1) I have tomorrow off; and (2) I get to go running tonight! I’ve only run ONCE this week, and the lack of mileage is seriously killing me. 🙂 I can’t wait for work to be over so I can run, run, run!

Last night’s blogger potluck was such a satisfying meal that I stayed nice and full until I went to bed AND I wasn’t starving when I first woke up.  Maybe lasagna, salad, and vegan cupcakes would be a great pre-race dinner?!

I puttered around the kitchen for a little bit this morning (I’m working on a secret recipe that shall be unveiled tomorrow), and then HUNGER finally struck! Suddenly, I was craaaaving coconut–and what goes better with coconut (besides chocolate and pina coladas) than oatmeal? 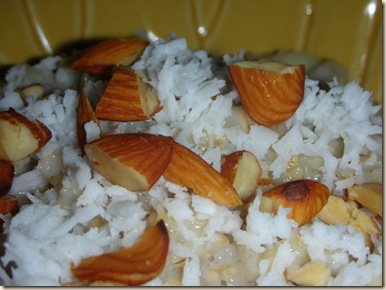 A while back I bought a bag of frozen, flaked coconut.  It’s sweetened with sugar (only 1 g of sugar per 2 tablespoon serving), but it’s so minimal that I thought, "eh, why not?" 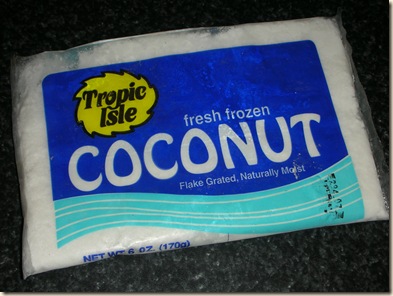 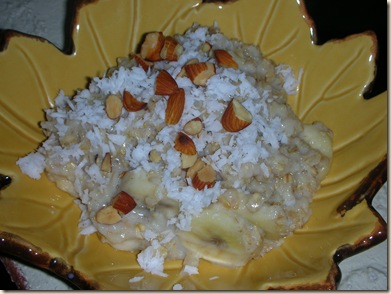 I’ve never managed to locate unsweetened coconut (it’s probably at Whole Foods, huh?), but this was a nice alternative.  Plus, it tasted so FRESH (I nuked the coconut in the microwave for 30 seconds to thaw it out).  Delicious!

Well, off to work! I’ll see you later for lunch, and then I’ve got a nice run planned AND I’m going to try to make it to the gym for weights.  For dinner, expect to see a LARGE pre-race meal because I’ve got a 14.0 miler planned for tomorrow! Eck!

Have a nice day!  What’s your favorite pre-race dinner? I usually have Pad Thai!