One of the classic drinks of the South, sweet tea is a divine concoction that reminds me of my mother.  It’s simple to make–boil water, mix in 1/2 cup (or more) of sugar, add several tea bags, pour into pitcher, fill with water, and chill–but each person tweaks the recipe slightly, creating their own ‘signature’ tea.

Obviously, it’s not healthy beverage.  But if presented with the chance to drink homemade sweet tea (the McDonald’s version doesn’t count!), I usually give in.

Anyways, I woke up thinking about sweet tea and decided to do an oatmeal spin. 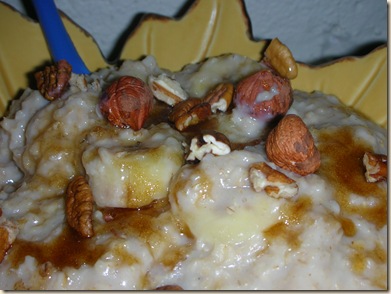 I made 1/2 cup of hot tea and combined it with 1/2 cup milk, 1/2 cup oatmeal, and 1 sliced banana.  After cooking it on the stovetop, I added 1/2 tablespoon of brown sugar and a nut mixture (hazelnut and pecan). 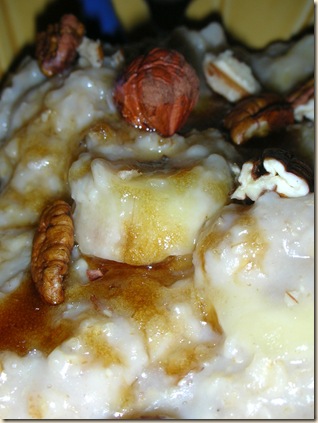 The tea gave the oatmeal a subtle kick that was slightly cinnamon-y in flavor.  It was a very mild addition to oatmeal, but delicious nevertheless. 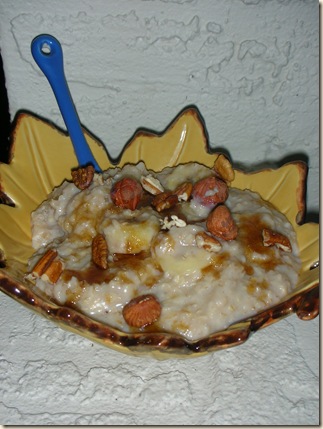 Well, it’s Monday–again.  My job is getting more and more complicated, and my workload keeps increasing.  Future Husband and I have a big talk about how I need to approach work with a very positive attitude, instead of feeling hopeless or overwhelmed.

I once read an article in Oprah magazine about a woman who was searching for her one true love.  She kept meeting men that just didn’t ‘fit’ with her.  She decided to write a list of the 100 qualities she desired in her partner.  Slightly embarrassed she wrote the list, she buried it in the back of her closet and forgot about it.  One year later, she met the man of her dreams, and he fulfilled almost every single one of her stated desires (which were substantive, not physical, traits that she required in a man–the one trait he didn’t fulfill was something silly like "blue eyes").

The point of the article was that people manifest our destiny in our thoughts and actions.  The concept may seem far-fetched at first, but I can think of a million examples that illustrate this belief.  For example, if you believe your spouse is cheating on you, you may become defensive and angry and end up pushing them away.  Or, if you decide you’re too tired to run as you’re lacing up your sneakers, you will probably quit after the first 10 minutes.  Even worse, if you feel fat or guilty for putting on a few pounds, you may decide you’re not worthy of healthy eating and end up binging.

I’m currently reading "The Power of Now" by Eckhart Tolle.  I’ll leave you with a great quote that rang true for me…

"Wherever you are, be there totally. If you find your here and now intolerable and it makes you unhappy, you have three options: remove yourself from the situation, change it, or accept it totally."

I’m off to totally accept the challenges of the week!  I hope you have a wonderful and productive Monday!