on September 1, 2008
in All Posts
Good morning! I hope you have today off, and if you don’t, I hope you secretly slack off a little behind your bosses’ back–after all, it is Labor Day!
I woke up around 7:30 (guess my body doesn’t know we don’t have to work today!) and made myself a delicious breakfast.
Breakfast- Banana and Pineapple Oatmeal Pilaf 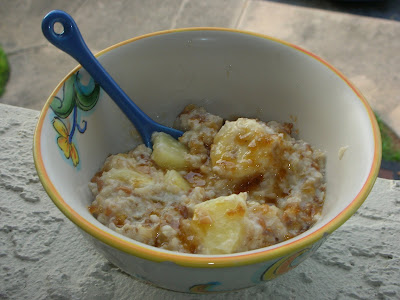 I love Kashi Pilaf with my oatmeal! I make a big batch and then keep it in the fridge, so I don’t have to deal with cooking it when I want breakfast. The addition of pineapple to this breakfast gave the dish a light, tropical feeling. Perfect for the last days of summer.
My Banana and Pineapple Oatmeal Pilaf contained: 1/4 cup milk, 1/4 cup water, 1/4 cup Pilaf, 1/4 cup oatmeal, 1 sliced banana, and 1 pineapple ring. I sprinkled 1/2 tablespoon of brown sugar on top.
On the side, I had an iced coffee with half and half and Stevia. 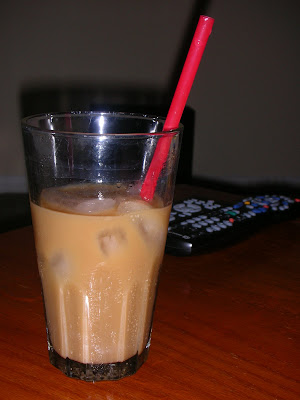 My hunger was strange last night. I felt bloated and full all day, and I wasn’t really craving “dinner foods.” I split up my meal in parts and ate as we hung around the house with some friends.

First up… juicy watermelon (my first of the season; I’m behind on the times!). 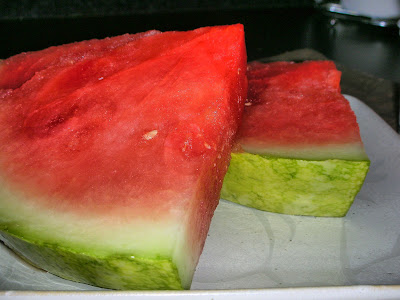 Then I made melty cheddar sandwiches (made from a 4-inch multi-grain hoagie roll). I had two with tomato slices. 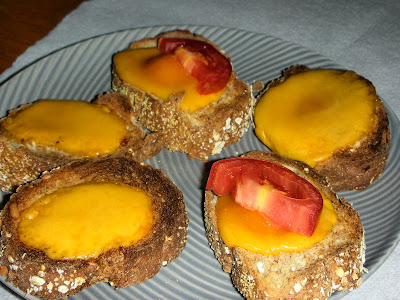 Last, I tried a new kind of Greek Yogurt– Cabot. I picked up the Vanilla Bean flavor at the store and it was so delicious and creamy. I could see vanilla specks in every single spoonful. 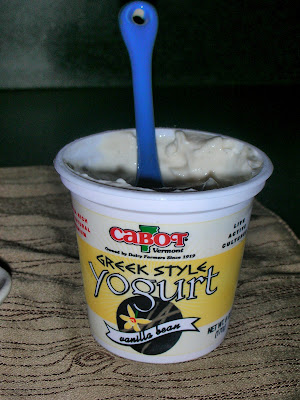 I had been rushing at the grocery store and hadn’t really read the ingredient list for the Cabot Greek Yogurt. I usually buy Plain Nonfat Yogurt, so I didn’t even think to check it out. I took a careful peak at the container while munching on the yogurt and saw this:

I did some research on it this morning and here’s what I learned: “Modified corn starch (also called modified food starch) is an additive that’s made by treating starch, which modifies one or more of its physical properties. This change may affect the texture, how fast it dissolves, or how easily it can be digested. The starch can come from corn (as stated) but can also be made from wheat, potato, rice, or tapioca. It’s added to foods to act as a thickener, to acquire a certain texture, or to keep foods moist. Modified food starch is typically added to processed foods such as sauces, pie fillings, and gravies. They’re not healthy in the respect that they don’t add any nutritional value to food, but they aren’t harmful. People who have gluten allergies should stay away from this ingredient though, unless a food containing it is labeled ‘gluten free.'”

Basically, modified corn starch is just a thickening agent, and although it is not natural, it is probably not harmful.

….but what else should we be looking for in the ingredients list?

The Center for Science in the Public Interest has a great list of food additives that are considered safe and that should be avoided. In addition to MSG and artificial sweeteners, here is a quick summary of additives that should never be consumed:

Although it’s virtually impossible to avoid food additives, it’s helpful to be armed with a list of the additives you should ALWAYS avoid. I’m going to print the Center for Science in the Public Interest list and put it in my wallet. Every time I’m at the grocery store, I find myself wondering if an additive is safe or not. It will be helpful to have a resource to turn to immediately!