Well, all my smack-talking on the blog yesterday didn’t work, and the CANES got whooped by the Gators.  However, Future Husband and I were really pleased because we held them off until the forth quarter and our defensive line looked really good.  It still sucked to lose (especially an away game)! But, we had a LOT of fun. 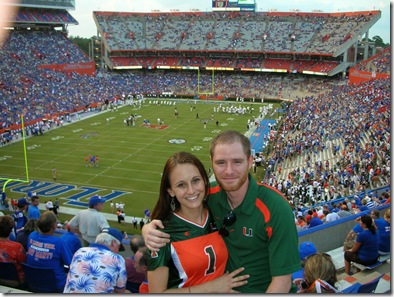 The view from our seats was GREAT!  However, we had to sit behind the biggest smack talker I’ve ever heard, and he really managed to cement my hate of the Gators.  I must admit, most of the fans were really nice and hospitable, offering us beers at the tailgate and generally being sportsmanlike!

BUT, let’s start from the beginning…

We picked up Jenna around 1:15.  We had so much fun! We have a lot in common, and it’s a shame she’s moving soon!  She isn’t going to move THAT far away, and we have plans to visit her in Tampa. 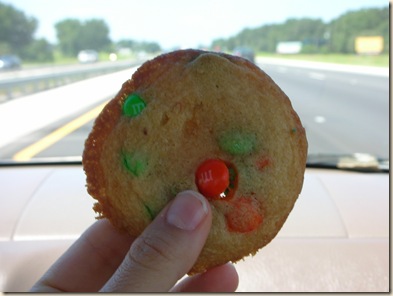 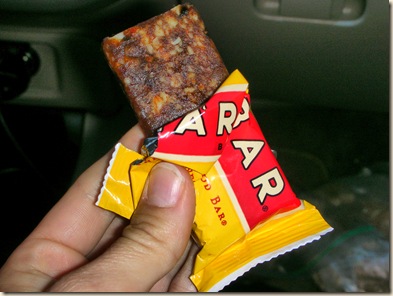 When we reached the tailgating area (which was RAMMED five hours BEFORE the game!!!), Jenna and I immediately took a photo because it was about 95 degrees and we knew we were 5 minutes away from being hot and disgusting. 🙂 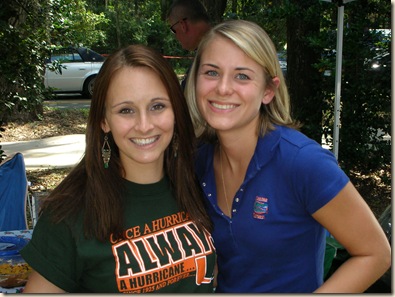 We met up with my aunt and uncle, who are the World’s Most Prepared Tailgaters.  They had an awesome spread set up! They both went to UF, but are great people and don’t hate us because we’re Canes fans! 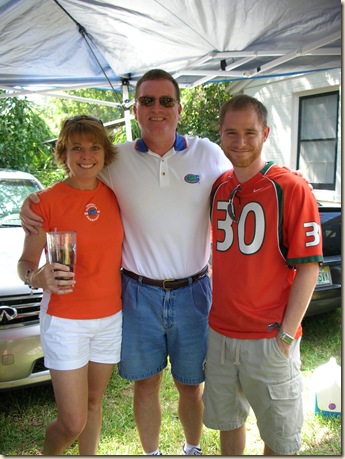 Ryan, Jenna’s boyfriend, met up with us about 15 minutes after we arrive, and we all hung out and drank a cocktail.  I had a diet Lemon Lime soda and Captain Morgan — mmmm delicious!  I also randomly grazed on some chips and homemade salsa. 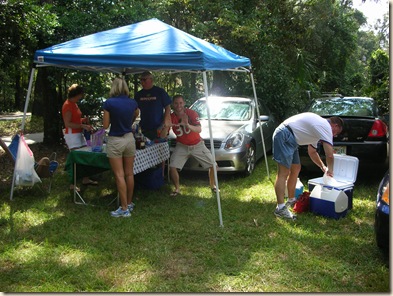 I have to admit, UF students and alumni definitely know how to party.  It was absolute madness!! The scene was so energetic.   Ryan proclaimed he knew where the BIGGEST PARTY of the tailgate was, and I really can’t turn down an offer like that, so we decided to check it out.

We walked down the main drag near the stadium for about a mile, and then we hung out with Jenna and Ryan’s friends while Future Husband and I shared a beer.  We knew our family would be firing up the grill soon, and I was starting to get really hungry, so we decided to head back and meet up with Jenna and Ryan later.

We took a ricksaw back to the tailgate because (1) it was way too hot to walk, and (2) they looked really fun! 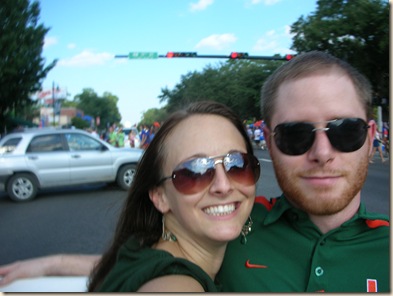 At my Uncle and Aunt’s tailgate, I had a beef and veggie kabob (which was amazing), potato salad, Sun Chips, and cheesy onion bread.  I also had MORE chips and dip (not pictured) and another beer. 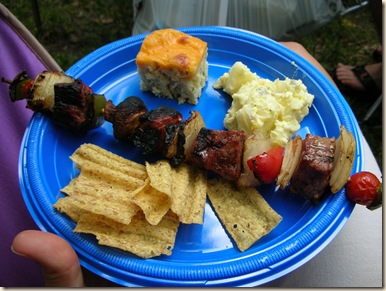 For dessert, I had (yet another) cookie and a rice crispy treat. 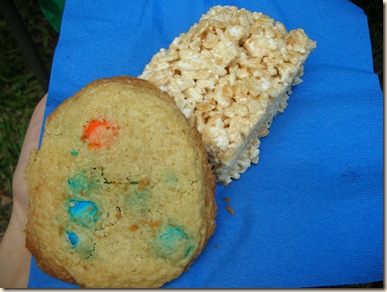 We packed everything up and walked back to the stadium.  We met up with Ryan and Jenna, and Ryan was kind enough to make me a "man" drink – whiskey and coke.  I had about half because suddenly I felt really, really intoxicated and didn’t want to poop out! 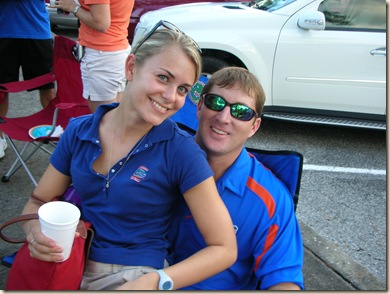 They are a really nice, genuine couple, and it’s so fun to find another couple to hang out with! Yay!

After that, we entered the stadium, and I promptly purchased a bottle of water.  I was so dehydrated. 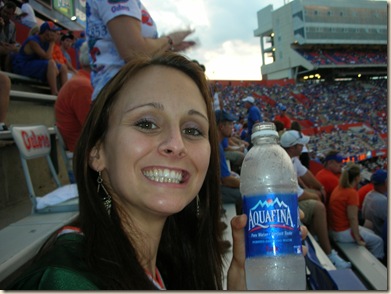 You know the rest…. the Canes got whopped in the fourth quarter, which was miserable (I wanted to cry).  We stayed to the bitter end!  Afterwards, we met up with Jenna and drove home.  I was the driver, so I had a coffee to keep me awake.

We didn’t get back until 2:15, which was EARLIER than I expected to get back.  I ate one last rice crispy treat, took a shower,  and fell immediately asleep!

I woke up at my usual time this morning, and now I’ve got to get ready for my run.  I just prefer to get back into my normal, healthy routine after a day like that!  I’m meeting a blog reader for a run and a farmers market excursion, so I better get going!

Have a wonderful Sunday!