So last night, Future Husband and his friend really wanted to get out of the house.  I was pretty beat, but agreed to (mostly because I haven’t gotten to spend ANY time with Future Hus lately).  They wanted to go to Friday’s, drink beers, and watch football.

I wasn’t feeling the booze… so I sipped a water instead.  A few years ago it would’ve never occurred to me NOT to drink, since everyone else was drinking! I was with Future Hus and our good friend, so I still had fun. 🙂 And I chauffeured everyone around.

When we came home, I laid in my bed last night just THINKING about the Chobani Greek Yogurt I had waiting in my fridge for breakfast.  I’ve never tried it before and was soooo excited to have a new yogurt to try!

Guess what? It did NOT disappoint! 🙂 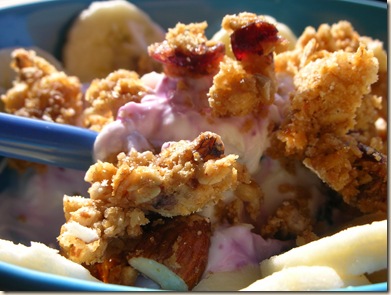 Last night, I "marinated" Chobani yogurt with 1/4 cup frozen blueberries.  I really wanted the yogurt to soak up the yummy blueberry juices. 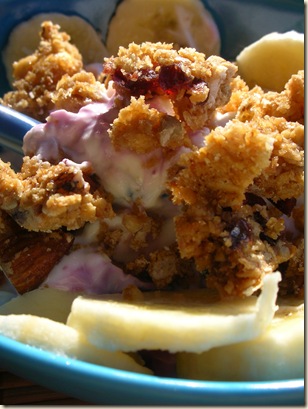 This morning, I added 1/ 4 of a crumbled Blueberry Vanilla Crackle Granola Plank and 1/2 a slice banana.  The creaminess of the yogurt really made this breakfast… mmmm delicious!  I can’t wait to try the honey-flavored one. 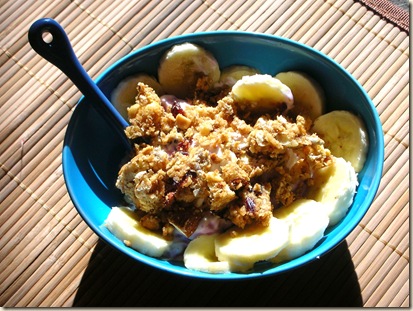 In addition to going on a nice run later, I have an INSANE amount of wedding-related errands to run.  I need to pick up my Future Sister-in-Law’s bridesmaid dress, find a pair of shoes, order a cake topper online, and MAIL OUT THE INVITATIONS!  We’ve been trying to mail them out for weeks, but we were trying to get everyone’s address and wanted to send them out at the same time.  I’ll be excited to see them go!

I’ve posted some pictures of the invitations before, but I wanted to give you a formal "Wedding Details" post.  Wedding invitations can be a big money sucker if you aren’t careful!  There’s two ways to do invites:  (1) order them through a printer; or (2) make your own.

Because we had an engagement party (in December 2007), we had an opportunity to try making our own invites.  We bought the set from Target and printed the invitations on my computer.  The final product involved some construction (trying the ribbons on), but they came out really, really attractive and fit the theme of the party well. 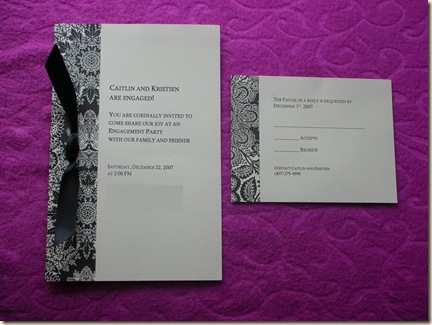 The one thing lacking from the engagement party invites was they didn’t feel very expensive.  Even if I didn’t pay a lot of money, I want it to look like I did!  We chose to get our wedding invitations through Costco.com, which has an insane selection of deeply discounted invites for all sorts of occasions. 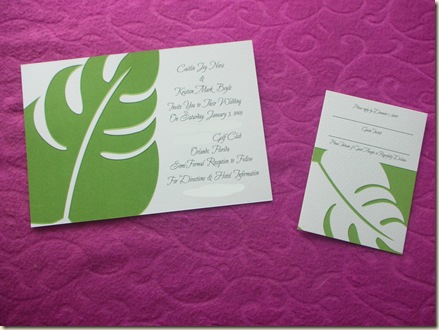 Our wedding kind of has a "Florida" theme, so these invites were perfect.  They were also not too girly (a request of Future Husband’s) and a nice balance between casual and formal.  Plus, the Costco invites have raised lettering and thicker paper.  I recommend ordering a sample of an invite before you purchase it, because the "feel" of the invite is very important! I ordered samples for several invites, and some felt as thick as tissue paper-bletch!

OK, off to run errands! See you for lunch and a run!

Next post: BBQ on the Brain and MORE Wedding Details