on August 27, 2008
in All Posts
Good morning! My Wednesday 6.0-mile run is going to be pushed to tomorrow because I didn’t get to sleep until 11:30 last night. I won’t have a chance to go this evening (I’m hanging out with friends after work), so today is my “rest” day. I try to stay fairly active on rest days, so I went for a nice, long walk as the sun came up. 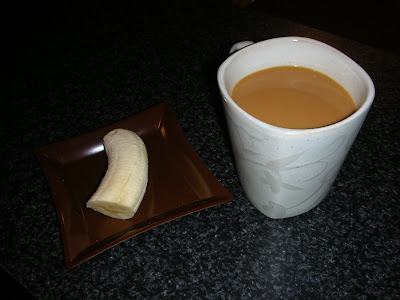 This is my pup, James Bond. He’s only 25 pounds, but he’s got these long legs and loads of energy. We used to run together, but he’s gotten out of shape! I’m making an effort to re-train him to run (short distances, like 2.0 miles). After I had my snack, James and I went on a 30 minute fast walk. Every now and then I’d jog or skip to get him used to the process again. 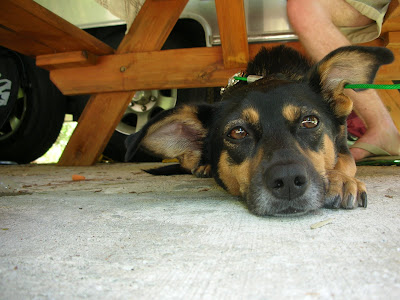 He started to poop out after 15 minutes, so I turned around. Here are my statistics:

Dogs are just like humans; you’ve got to slowly increase their endurance. We’ll be going on a long walk again soon! (By the way, I leave my other dog at home because her legs are too short and she hates exercise…. she’s a total couch potato). 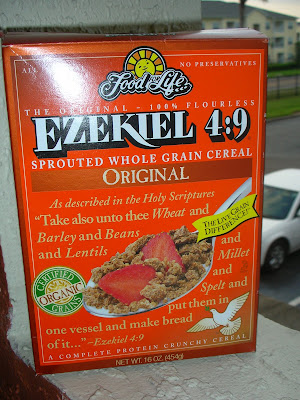 I stumbled upon this Ezekiel 4:9 Cereal in the store last night, and even though it was ridiculously expensive ($5.69), I just had to give it a try. It’s pretty calorie-dense, so I think it will last awhile. The side of the box claims: “We discovered when [Barley, Wheat, Beans, Lentils, Millet, and Spelt] and legumes are sprouted and combined, an amazing thing happens. A complete protein is created that closely parallels the protein found in milk and eggs…. containing all 9 essential amino acids.”

With 190 calories, 8 grams of protein, and 6 grams of fiber in one 1/2 cup serving, I snatched it right up! I don’t usually measure out cereal, but I did because this one is so calorie-dense. I mixed yogurt, the other 1/2 of my banana, and blueberries with the cereal for a filling, cold breakfast–perfect after a hot and sweaty walk! 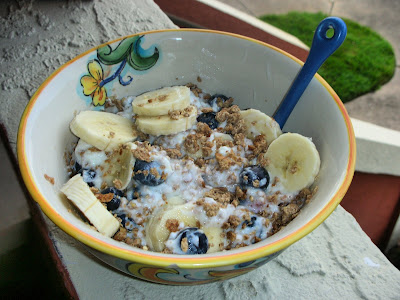 Has anyone else tried the other variations of this cereal? I think the varieties are: Original, Cinnamon Raisin, Almond, and Golden Fax. The Original was pretty good; I’d like to try it hot with oatmeal!

Have a fabulous day!