Faye has come and gone, but it is still realllly windy outside and a run was out of the question at 6 AM. It was nice to lay in bed and listen to the wind howl and the trees sway. 🙂 Maybe by this evening, it will have cleared up enough for an outdoor run (I am ITCHING to go running… it’s been TWO DAYS!), but if not–I’ll hit up the treadmill. 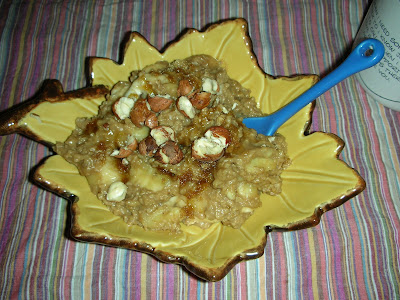 If you haven’t tried coffee in your oatmeal yet, you are missing out on a fabulous experience! This recipe is similar to my last attempt, but I added hazelnuts on top to go with the hazelnut coffee-flavored oatmeal! MMM MMM MMM! 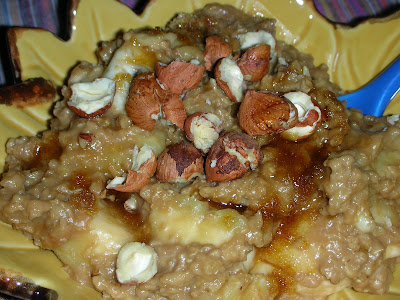 Besides an eventual run, today’s agenda calls for work, work, and more work! Lots to do. At least it’s humpday! 😀

Have you seen this article on ABC News? Here are some highlights:

“Mississippi holds the dubious honor as the most obese state, with 31.7 percent of adults qualifying as obese. Colorado is the slimmest state, with only 18.4 percent of the adult population classified as obese — but even this figure is the result of two years of steadily increasing obesity rates.

According to the report, Colorado remains the only state in which the adult obesity rate is less than 20 percent. “In 1991, no state had an obesity rate of more than 20 percent,” said Dr. James Marks, senior vice president of the Robert Wood Johnson Foundation, during the press conference. He added that the new figures are cause for “urgency and outright alarm.”

I’m not exactly a mathematician, but I don’t understand these statistics. Isn’t there a leveling off point to the obesity crisis? What I’m saying is?–do these scientists assume that all the active people in the United States (and trust me, there’s a lot of them!) going to throw up their hands in 7 years, stop going to the gym, and drop years of healthy eating?? I really don’t believe we’ll ever have a 75% overweight or obese rate — do you?