on August 16, 2008
in All Posts
Good morning. We’re definitely on a slow start this morning, which is a nice break from the week! Dinner and drinks last night was fun, and I stayed up wayyyy to late. An afternoon trip to the gym is definitely in order.
Breakfast

Something stabilizing–two pieces of WW bread with a sliced banana. I tried some cinnamon on one and it was great–a little extra spice! 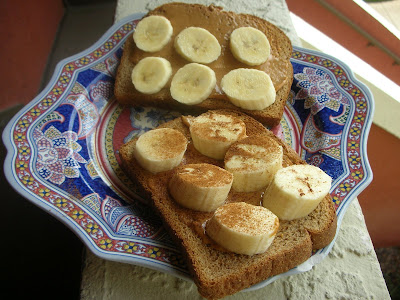 We hit up our favorite “upscale” BBQ place, called Wildside, and had a few drinks. I had two Beach Bum beers (Budweiser’s summer brew). Future husband and I split an appetizer and a main course.
French bread with BBQ chicken and salad greens (I had two of the four slices): 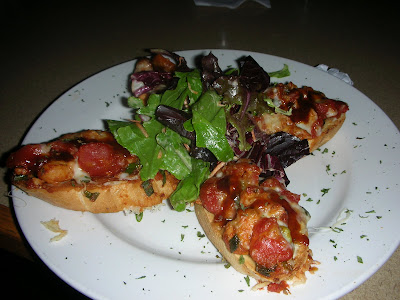 Grilled chicken sandwich on WW bread with a side of fries (I had 1/3 of the sandwich and 1/2 of the fries… god, they were GOOD!): 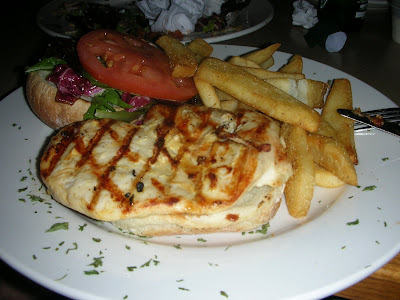 After dinner, we rode in a Pedicab (a person pulls you on a bike) to the downtown bar district. I had a diet coke and cherry vodka and a sprite and banana rum. It was a little too much alcohol, but we had a great time. I definitely cut myself off way before anyone else! 🙂

Musings on the Integrative Food Pyramid

Future Husband bought me this (730 page!) Chinese medicine reference book called “Healing with Whole Foods: Asian Traditions and Modern Medicine.” I love all things nutrition and it’s really cool to see things from another perspective. The Chinese have such a different view of nutrition and wellness than Americans do.

For example, I found the following chart in the introduction. It’s called “Integrative Nutrition Pyramid.” This is the accompanying text (I’m paraphrasing):

“Consider the common field pyramid that one sees in the media… Dietitians know that fewer than 3% of Americans follow the recommendations of the USDA food pyramid, and many who do follow the recommendations say the diet does not greatly benefit them in terms of health or avoidance of disease. One reason is the quality of the food. Most of our food is refined and (according to some researchers) the greatest cause of free-radical cellular degeneration in our bodies, which contributes to our most common prevalent chronic diseases. Also, our food contains hormones, pesticides, and antibiotics. Foods should ideally be grown organically, using sustainable farming…. Additionally, the USDA pyramid ignores the powerful connection between the mind, body, and spirit in promoting general health.” 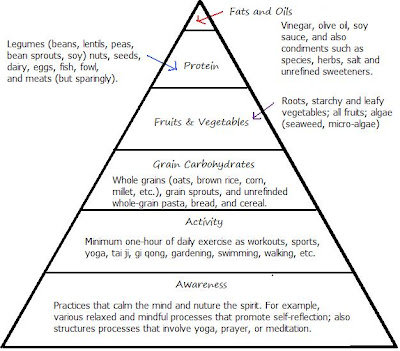 What I think is so cool about this “food pyramid” is the inclusion of Activity and Awareness at the base. After all, you can eat perfectly, and if you aren’t active or happy, it won’t translate into a complete and balanced life. This is one aspect of alternative medicine that really appeals to Future Husband and I–the concept that emotional health is as important as physical health. I didn’t always think like this, but now I think it makes so much sense. What do you guys think?

Haha–well, that was your dose of hippy chatter for the day, I promise! Our plans call for a workout, relaxation, and working on the business. Enjoy your day.