on August 13, 2008
in All Posts
I was a little sleepy this morning, so I thought I’d try coffee oatmeal a la Kath (katheats.com) and Tina (carrotsncake.com). Oh MY! I can’t believe I waited so long to try this. After all, it combined my two favorite things–coffee and oatmeal! 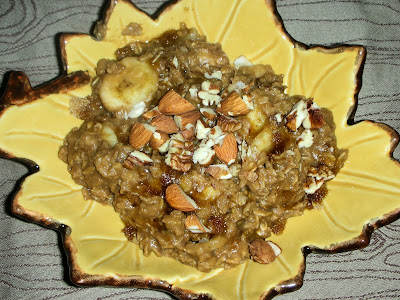 I used a hazelnut-flavored coffee and half and half instead of milk. The exact measurements were: 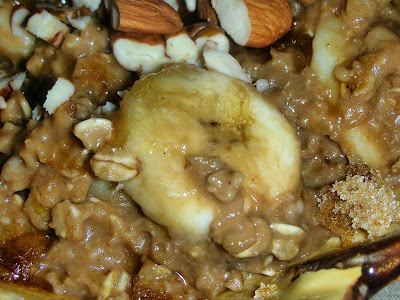 This was a GREAT oatmeal combination! The coffee gave it a wonderful color and aroma, and I just positively inhaled it! Thank goodness for tiny spoons or it would’ve been gone in seconds! And YES, I still had a cup of coffee alongside. 🙂 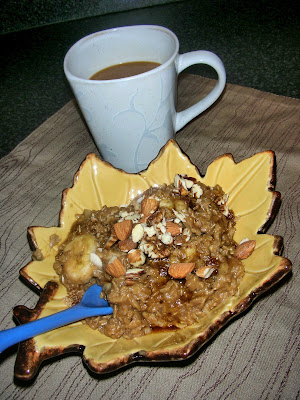 I will definitely be making this combination again! 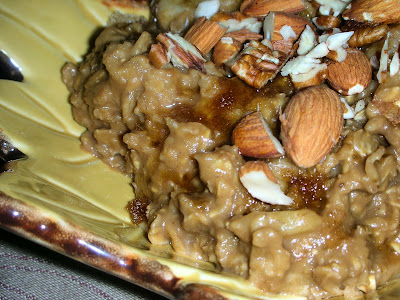 Today’s plans include loads of work (I’ve got a big deadline today!). At 7 PM, I have a personal training appointment at my gym. The general manager offered me a free session after I told him about the blog and my running. YAY!

One of the major issues we’re going to discuss is building muscles while training for a long-distance race. I have a very lean build, and the trainer could tell I was a runner without even asking. I’d like to build more muscle mass (especially in my arms) before I have to wear a sleeveless wedding dress! I’ll let you know what he says.
Did you know….
The faster you run, the more carbs you use relative to fat. As your effort increases from sitting to walking to jogging to fast running, you use proportionately less fat and more carbohydrate. During a long run, however, your muscles gradually use fewer carbs and more fat. This is a protective mechanism that helps to prevent glycogen depletion. Your maximal oxygen consumption (VO2 max) is a limiting factor in your running performance. Fats yield 15% less energy than carbs for each liter of oxygen used. Because fats use oxygen less efficiently than carbs, you cannot run as fast burning just fats.
How much fat you burn during running can also be affected by how long it has been since you ate carbohydrates. If you eat carbs during the 90 minutes before you run (particularly foods with a high glycemic index), your body will tend to use less fat and more carbs during the run. This occurs because insulin is released in response to eating carbohydrates, which reduces the mobilization of fatty acids, which reduces your muscles’ ability to use fat for fuel.
A lot of people believe there’s a “fat burning zone” in exercise. The myth developed from the fact we already discussed that when you exercise harder, you use relatively less fat and more carbohydrate. This led to the belief that to lose fat you need to exercise gently. The missing ingredient is that fat loss is determined by the balance between calories consumed and calories burned over time. Therefore, the source of the calories burned during a specific workout is not as important as the number of calories burned (from http://www.runningtimes.com/).
{ 0 comments }