Biking Across The Country (My Butt Hurts Just Thinking About It)

A blog reader named Rosie emailed me to tell me about her friend, Sophia, who is biking across the United States with her friend Madeleine.  YES – BIKING ACROSS THE USA!  (And blogging about it.)  To accomplish this feat over three months, they are riding 60 – 100 miles each day.  Daaaaang.

Sophia and Madeleine are fundraising for STOKED, which is where Sophia used to work.  Here’s what STOKED is all about:  “Just about everybody that is successful has done something, gone somewhere or met someone that opened their eyes and showed them their potential to do something big with their life. For many youth growing up in New York City and Los Angeles, cities where STOKED operates, the opportunity to do something like that is not a reality. So, through this Live A Big Life Campaign, high school graduates of STOKED will be able to apply for a Live A Big Life Grant which will close that opportunity gap for them and allow them to live their own big life.”  Pretty cool! 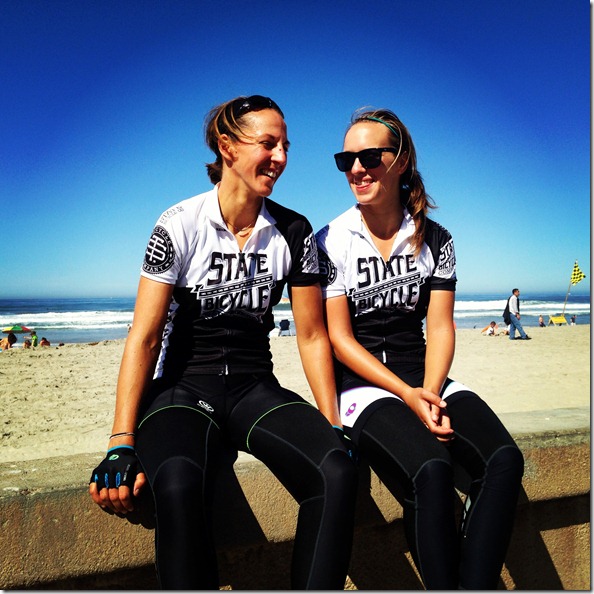 I was curious about WHY Sophia and Madeleine decided to bike across the USA and HOW – both logistically and saddle sore-wise – they are handling the journey.  So I did a fun little Q&A with Sophie via email.  Read on for more…

CAITLIN:  Thanks to your About page, I know who you are riding for, but WHY – why the bike ride? How did this idea come up?  Whose idea was it?  Did it take a lot of convincing to get the other one to agree?  How do you know each other?

SOPHIA:  After graduating college I did a short bicycling trip from NYC to Boston along the coast, and got a taste of what it’s like to travel on your bike. I’m from the Northeast (Ithaca, NY) and have family along that route that I had been visiting in car my whole life, and here I was biking down familiar roads but feeling like I was just getting to see the area for the first time. I was kind of hooked from that time, but due to real-life things like getting a job and having rent to pay, I wasn’t able to pick up and go on bike trips whenever I wanted.

We met in NYC, I was working and she was volunteering and we became friends that way.  Madeleine and I were both at a point of transition in our lives and both decided to move out of NYC – she is going to medical school this fall and I reached a point where I needed to move on and try something new – and so it was a "when else will we ever have the opportunity to do this?" kind of conversation. This country is so enormous and neither of us have been most of the places we’re going on this trip, so why not make it into a challenge and see it on a bike! It didn’t take convincing so much as many conversations about whether or not we really wanted to commit to it. There’s a lot of room for error and it takes a lot of preparation, so it was mostly coming to the decision that we were both up for it. 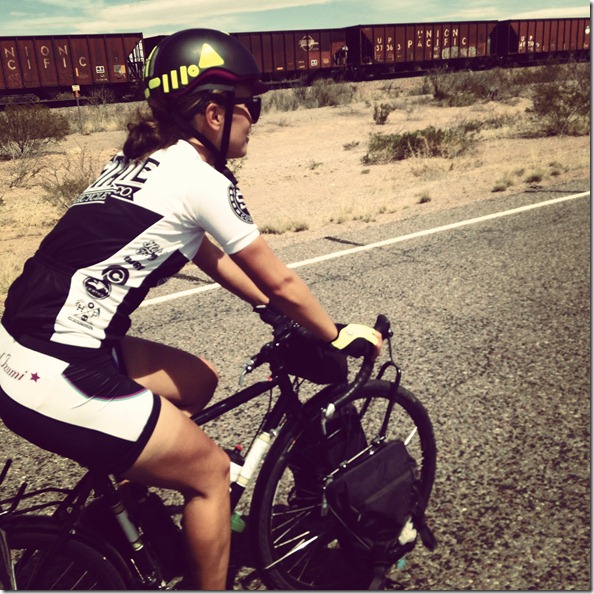 CAITLIN:  How long is this going to take?

SOPHIA:  We’re allowing 3 months, we left March 5 and plan to be in NYC in the first week of June. I quit my job in NYC because I’m planning to move somewhere new after this is done (either New Orleans or San Diego), so I saved up to be able to afford this.

CAITLIN:  How did you train for this?  Have you done lots of races before?

SOPHIA:  Neither of us have done bicycle racing at all. We’re both into sports – I’m a runner and was doing Crossfit in NYC – and we both bike all over the place for transportation, but nothing like this. We trained by going for long bike rides and building up our mileage! We trained for about a month, both biking and other endurance workouts, but the good thing about this is that you really do get in shape as you go along.

CAITLIN:  I read the most interesting thing for you has been to see ‘food deserts’ in action. Can you talk a little more about this?

SOPHIA:  We cover anywhere from 60 to 100 miles a day, so particularly in less populated areas like inland California, Arizona, New Mexico, west Texas etc, we go for long stretches seeing nothing but teeny tiny towns. A lot of times in those areas, a town would consist of a gas station, an RV Park, a few houses and that’s it. We went easily a full week, multiple times, without seeing anything resembling fresh food or really anything that you couldn’t get in a can or a box. We’d roll into a town having just biked 85 miles, and our options would be a can of baked beans and pretzels, or Ramen or something like that. And then during the middle of these riding days, there would be one diner along the route (because remember we’re not on major highways, we’re on more local highways and roads) to stop and get lunch, and our options would be fried this and that, white bread and American cheese, etc. Just miles and miles where the only options were processed food, and it’s not that we eat immaculately when we’re home, but it was wild to not have the option to eat fresh food. We both feel that it gave us a new perspective on the complexities of health and opportunities in our country. 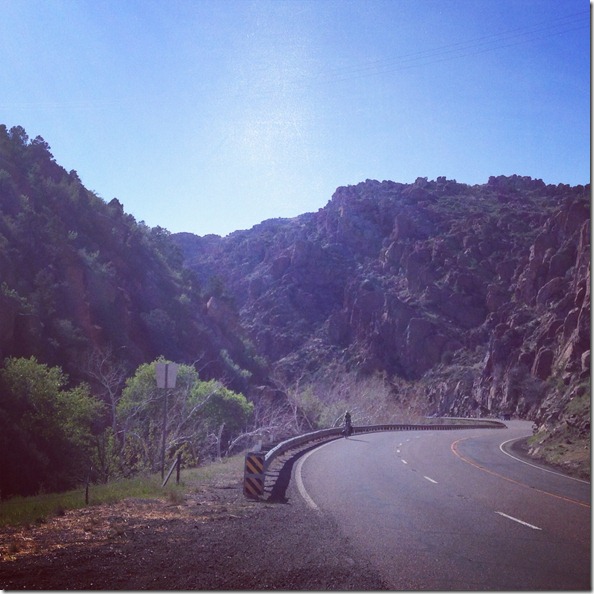 CAITLIN:  What problems have you encountered on the road? Saddle sores?!

SOPHIA:  Well yeah, our butts get a little sore! But fortunately (knock on wood) we really haven’t had any real problems yet. We’ve only had 1 flat tire the entire way (Madeleine got it in Mississippi), no major bike mechanical issues (they’re getting serviced and getting new tires on them as I type), no injuries or sickness, nothing. The biggest thing we’ve had is some nagging physical issues, including sore rears, and my hands and wrists are a little bit sick of me leaning on them for 8 hours a day.

CAITLIN:  Where do you sleep at night?  How are you financing the trip?  Is someone following you in a car?

SOPHIA:  We camp almost every night, either in state parks or in RV Parks (some of them have tent spots). No one is being a sag vehicle for us, we carry everything with us at all times including food, sleeping bags, tents, clothes, water, etc. All in all we probably each have 45-50 lbs of stuff, in addition to our bodies and our bikes. We do sleep in the occasional motel, and also sometimes stay with Warm Showers hosts (like couch surfing for bicycle tourists).  We’re both financing it on savings, and a few companies donated gear to help with the costs (see the Supporters page on the website). But besides the startup costs of equipment, it’s not too terribly expensive if you camp and eat mostly out of grocery stores, which we do.

CAITLIN: What kind of bikes do you have?  What must-have gear have you packed?

SOPHIA:  I’m riding a Raleigh Sojourn and Madeleine is riding a Surly Longhaul Trucker. They’re both steel framed touring bikes, which is the most important piece of equipment. Steel framed so that they can handle carrying so much weight for so many miles, and it also makes for a more comfortable ride as it absorbs more impact from the bumpy roads. We each have front and back racks to attach our gear onto, and we have front and back panniers to carry all our stuff. We also got good saddles for this ride – Brooks saddles – that are really common for trips like this. We both wear helmets, of course, and in Phoenix we picked up rear view mirrors – they’re incredibly lame looking but really help when we want to see what cars are behind us and how close, a lot of these roads don’t have shoulders for us to ride on so seeing behind us helps enormously. 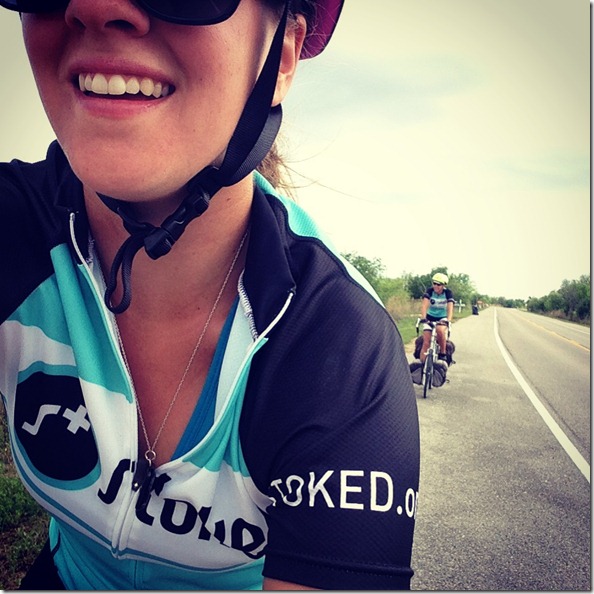 If you want to learn more about Sophia and Madeleine’s trip, you can check out their website and follow their blog.  And, if you feel so inclined, consider donating to their cause and making this crazy bike ride even more worthwhile!