To Zoo or Not to Zoo

We recently took Henry to the zoo. It was a wonderful family experience, as Henry had just learned the names of a dozen wild animals and really loved seeing “effephants,” “zeebahs,” “gee-raffs,” and “roarrrrs” in real life. 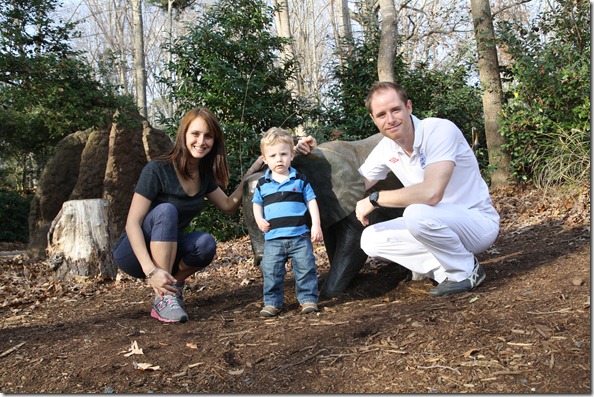 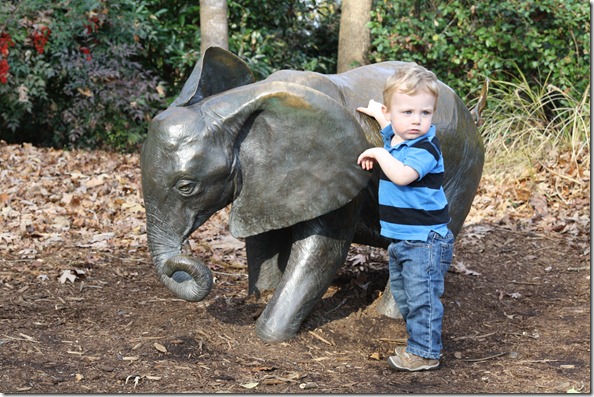 There are actually two zoos (NC Zoo and Riverbanks Zoo) within two hours of Charlotte, which meant that I had to decide which zoo to attend. As an animal lover, my first thought was, “I’d like to go to the most humane zoo.” So I did some quick Googling and discovered that the NC Zoo is actually a walk-through zoo – the largest of its kind in America. The NC Zoo has over 5,000 acres of land, including large roaming pastures for many African species. 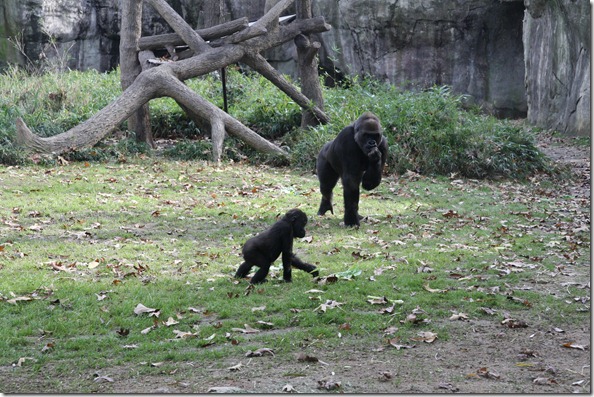 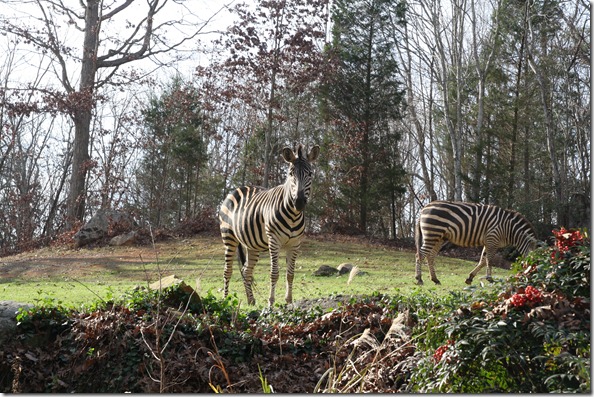 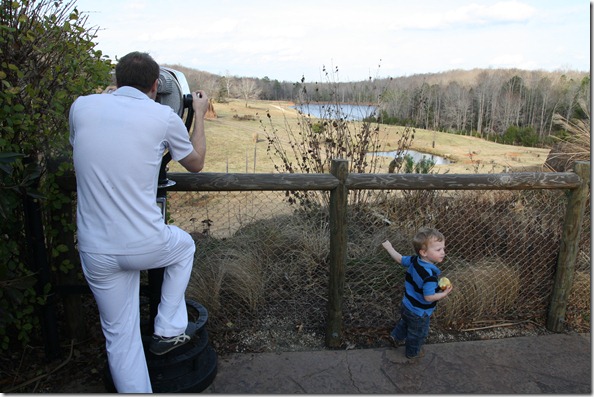 Of course, this style of zoo means that it is not as easy to see the animals. They could be hiding behind a tree. They may be too far away. A toddler may not even notice that there’s a rhino over there. 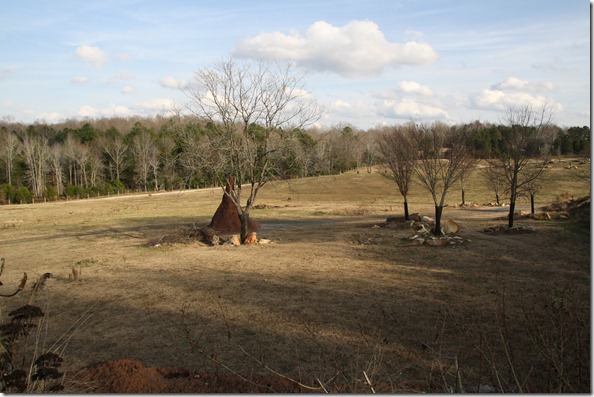 We didn’t mind the setup of the NC Zoo at all.  I felt that the ‘trade-offs’ were small in comparison to what the animals got out of the deal. I’m not going to complain that a zebra has space to roam!

I was feeling really good about the NC Zoo until we got to the ‘North America’ section of the zoo (in a zoo this large, there is a lot of walking – we walked almost five miles!).  The North America section was still nice, but the enclosures weren’t as generous – and I saw a few of the animals displaying what PETA (People for the Ethical Treatment of Animals) calls “zoochosis.” Boredom and loneliness causes some animals in captivity to exhibit behaviors such as rocking, swaying, pacing, and self-harming.  For example, the grizzly bear was pacing back and forth in front of his enclosure’s door, which made me sad (but maybe it was just nearing dinnertime…).  No one was trapped in cages with creepy metal bars, however, and I could see lots of opportunities for entertainment in every enclosure.

I left the NC Zoo with mixed feelings.  As I said, we had a really great family experience.  Henry truly enjoyed seeing all the animals.  All the zookeepers seemed kind and knowledgeable and – overall – the facilities were so superior to anything that I’d ever seen before. 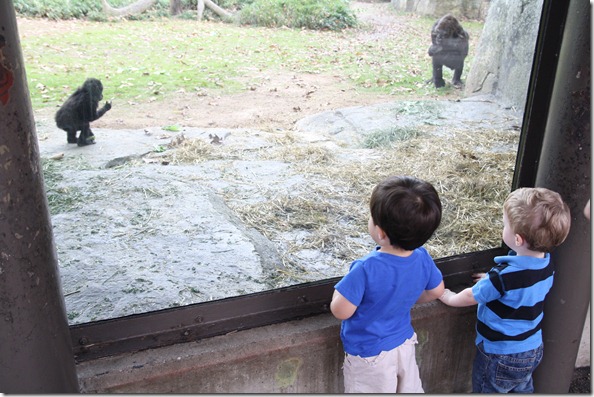 I came home and ended up doing hours upon hours of research into zoos. I wanted to share a bit about what I’ve learned; however, I do feel like I’ve only begun to scratch the surface.   In writing this post, I tried hard to double check all my facts, but as you can imagine, with so many federal and state laws, it’s complicated.  But I’m hoping that we can have an interesting discussion!

If you search for the ‘pros’ of zoos, you come up with lists like:

If you search for the ‘cons’ of zoos, you’ll read about:

Like many things, the zoo issue is complicated.  Although I know some people will vehemently disagree with me, I look at the lists above and think, “Wow, this is an issue where neither side is completely right or wrong. Zoos can do great things for animals, but they can also do bad things for animals.”

The first thing that I learned through my research is that there are over 2,000 animal exhibitors licensed by the U.S. Department of Agriculture (USDA), but according to The Humane Society, “most of these zoos are no more than prisons” (in fact, about 10% are probably decent – for more info on that, keep reading).  The 1,800-odd ‘zoos’ that are more like prisons are usually roadside animal attractions, not large city zoos. We’re talking animals in small enclosures with little to no stimulation.  So having a USDA license doesn’t mean the facility is a good place for the animals to live.

I read through the USDA Animal Welfare Act and Requirement and was struck by how LITTLE it actually requires (especially for such a long document!).  For example, when it comes to the minimum size of enclosures for big cats or elephants, there are no specific numbers, just this boiler-plate language:

Enclosures shall be constructed and maintained so as to provide sufficient space to allow each animal to make normal postural and social adjustments with  adequate freedom of movement. Inadequate space may be indicated by evidence of malnutrition, poor condition, debility, stress, or abnormal behavior patterns.

We all know that paragraphs like that mean basically NOTHING.

So we can’t rely on the USDA to tell us what facilities are “good” and which are “bad.”  If we’re going to go to the zoo, how do we figure out which ones are more humane?

Eventually, I stumbled across the Association of Zoos and Aquariums (AZA). The AZA has an intense accreditation process that evaluates each applying zoo to ensure it meets the standards for living environments, social groups, health, and nutrition. The AZA also ensures that the animals are provided with enrichment to stimulate their natural behaviors and make their everyday experiences more engaging and interesting. The Commission evaluates other aspects of the zoo as well, including conservation and research efforts. As of September 2013, the total number of AZA-accredited zoos and aquariums is 223.

You can search for a AZA accredited zoo or aquarium on this page.

I spent some time reading through the AZA Animal Care Manuals.  While a lot of the information means very little to me since I’m not a zookeeper or a vet, I was looking for the AZA’s outdoor and indoor recommended space requirements to compare it to USDA requirements.  For primates, the USDA minimum standards for larger primates is 25 square feet per primate.  The AZA recommends small groups of less than five chimps be provided with at least 2000 square feet of indoor and outdoor space.  The AZA recommends that larger groups have an additional 1000 square feet for every chimp over five chimps (so 10 chimps would need 7000 square feet of indoor and outdoor space).  (Source)  Either way you slice it, the USDA standards are much, much lower than the AZA standards. 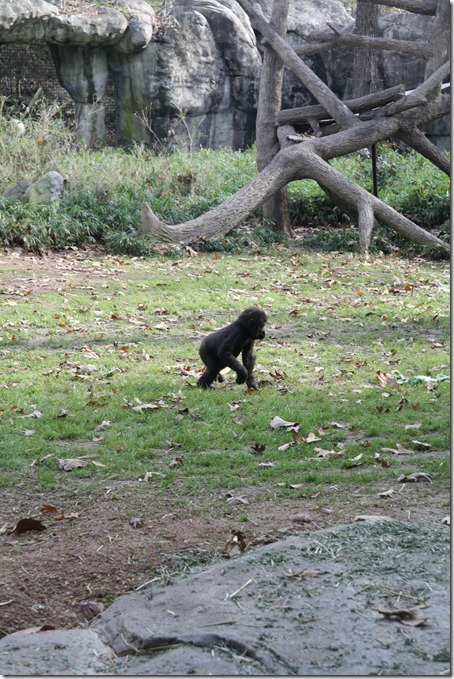 For lions, the AZA holds a minimum requirement of 10,000 square feet for new exhibits that will hold three or fewer lions.  Only half of AZA facilities ‘lock up’ their lions overnight, usually for safety concerns.  (Source)  I didn’t find any specific size requirements for lions in the USDA Animal Welfare Act (but that doesn’t mean it doesn’t exist – I just couldn’t find it); that means that the federal minimum is that wonky, boilerplate, mean-nothing paragraph I quoted above.

Of course, after learning about the AZA and browsing their website, I checked out what PETA (a staunch protestor of all zoos) had to say about the AZA.  I found this article on the PETA site that is specifically about elephants.  The article states:

The elephant standards adopted by the Association of Zoos and Aquariums (AZA) are woefully inadequate, and many AZA zoos that display elephants do not meet even these meager requirements. The AZA’s indoor space requirements can be satisfied with a stall that is only 20 feet by 20 feet (400 square feet) in area; this means extreme confinement for elephants who are kept indoors overnight and during inclement weather. Outdoor enclosures need measure only 40 feet by 45 feet (1800 square feet)—about the size of a three-car garage.

I reviewed this information against the AZA elephant guidelines and found that, yes, the minimum indoor space is 20 feet X 20 feet for females – but it’s 600 square feet for males or females with calves.  And the outdoor minimum is 5400 square feet – not 1800 – and that’s per elephant.  (Source)  I’m not sure where PETA is getting their 40 by 45 feet number from (and the PETA article isn’t dated, so it could simply be old information, not purposefully misleading).  Again, the USDA doesn’t set forth any specific minimum size requirements for elephants.

I don’t think AZA accreditation means the zoo is perfect.  For example, the Toldeo Zoo accidentally starved a bear to death but is accredited by the AZA.  And if you believe that animals should not be kept in captivity regardless of how nice or big their enclosure is, AZA accreditation will really mean nothing to you.  But, from my layperson’s perspective, it seems that the AZA has good standards for humane animal care.  Both of the zoos near Charlotte – Riverbanks and the NC Zoo – are accredited.

Of course, all this research got me thinking about marine parks.  If you’ve been reading for years, you know that we used to be annual passholders to Sea World.  I’ll be honest – we were really annual passholders because that’s when Sea World was partnered with Anheuser Busch and gave away unlimited (!!!) free beer.  The free beer was amazing for us humans.  However, I don’t think Kristien or I ever really put much thought into how Sea World’s animals felt, which I feel ashamed of now.

Have you seen trailers for the the Blackfish documentary?  I really want to watch it.

Blackfish tells the story of Tilikum, a performing killer whale that killed several people while in captivity. Along the way, director-producer Gabriela Cowperthwaite compiles shocking footage and emotional interviews to explore the creature’s extraordinary nature, the species’ cruel treatment in captivity, the lives and losses of the trainers and the pressures brought to bear by the multi-billion dollar sea-park industry. This emotionally wrenching, tautly structured story challenges us to consider our relationship to nature and reveals how little we humans have learned from these highly intelligent and enormously sentient fellow mammals.

Food for thought: Sea World is an AZA accredited facility.

To sum up this post, as an animal-adoring vegetarian (who feels that there is inherently gray areas for all vegans, vegetarians, and animal lovers <—good post that I refer back to all the time), I have very complicated feelings about zoos.  On one hand, I *love* the zoo experience.  On the other hand, I wish that no animal ever had to suffer in a zoo, whether it’s an AZA zoo or a roadside animal trap.

I recognize that nothing speaks louder than my dollar. When I choose to take my family to a zoo or a marine park, I am saying, “I feel that this facility is okay.”  When considering the moral and ethical implications of zoos, we all have to make decisions for ourselves on whether or not we will attend. When I do choose to go to a zoo, I will – at a minimum – choose an AZA zoo.  Although the accreditation doesn’t mean the facility is perfect, I do feel that it means something significant, at least when compared to federal standards. 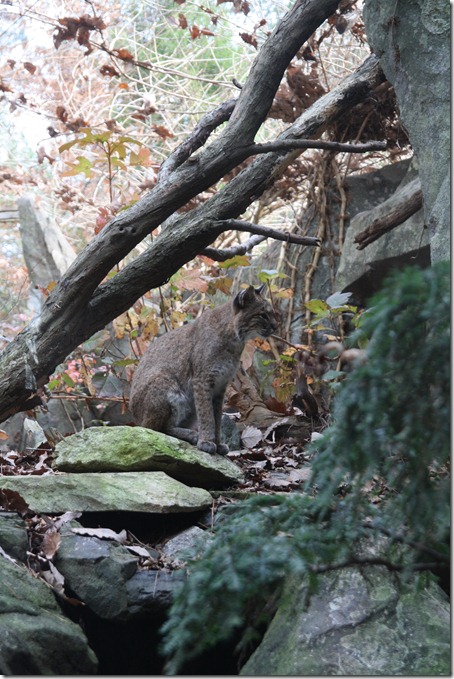 I’d love to hear your thoughts on this very complicated issue (and if you feel passionately about your opinion, please keep it friendly – after all, that’s how you ultimately sway hearts and minds!).  How do you feel about the issue? Do you have a ‘line in the sand’ about certain facilities or attractions?  Have you seen Blackfish?  What did you think?