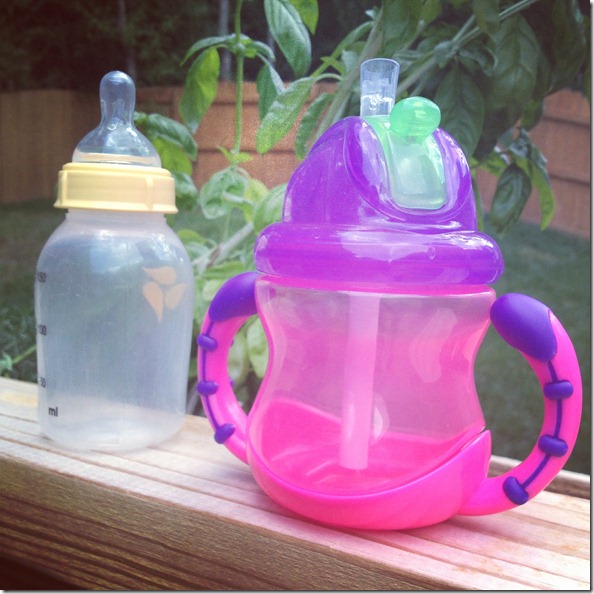 I wasn’t planning to post today, but I really need the mommas’ help.  You see, we are trying to eliminate Henry’s beloved babas.  At his one year check-up, his pediatrician told me that I should stop giving him bottles and transition him full-time to sippy cups.

Henry already uses sippy cups at meals to drink water, but he is heavily attached to the bottle.  Looking back, I dug my own grave.  He associates riding the car, sitting in the stroller, getting his diaper changes, and (sometimes) falling asleep with bottles.  In hindsight, I should’ve been more careful about making him reliant on the bottle, but the bottle ALWAYS soothed him so quickly.  Short-term sanity for long-term consequences, I guess.  You can add this to the extremely long list of “Things I Will Not Do With BabyHTP #2.”

Bottles and sleep is the biggest problem. When I first sleep trained Henry, I was very, very strict about not letting him fall asleep with bottles. But over the months, I got pretty loose about it, mostly because Henry is normally early riser with some days of extreme early rising (any suggestions? I’ve tried everything including cry methods… but maybe there is a miracle technique out there that I haven’t heard of…).  Every fourth day or so, he wakes up at 5 AM screaming his face off for milk, so I groggily march upstairs, change his diaper, give him a bottle, and everyone goes back to sleep.  Again – short-term sanity for long-term consequences.  If I didn’t give him a bottle in bed at 5 AM, we would be up, and the entire day would be ruined due to his inevitable crankiness. But the cost is that he learns to go back to sleep with a bottle in his mouth (which is also bad for his teeth).  I’m kicking myself BIG TIME for this and feel so ‘weak’ for establishing such poor sleep habits.  Too late now though.

To sum it up, breaking the bottle habit is going to be hard.  His doctor explained that while it seems difficult now, it will only get worse and worse as time passes and Henry becomes more willful and independent.  So despite the difficulties, I want to rip this bandaid off.

This was game plan:

Sounds simple, but so far – its been hellish.  He threw an epic temper tantrum before his nap.  I’ve never seen him so mad for so long.  And I felt really, really sad and guilty… but I didn’t crack because I knew it would all be wasted if I did.  I tried everything to distract him from the idea of the bottle – a sippy cup, a book, Elmo videos on the iPhone. But almost nothing worked except time for him to wear himself out.

All of my real life friends did extended breastfeeding or have younger babies who don’t need to be off the bottle yet.  I have no one in my life to ask for bottle weaning advice.  So I’m turning to you, mommas of the Internet. How did you take away the bottle?  Any tricks? Is cold turkey the way to go or should I let him have bottles at ‘high needs’ times for now (naps)?  How long will this hell last?

I’m more than willing to change my game plan if the general consensus is that things will be better if we do it differently, so please – weigh in!