Trisuits: One Piece or Two?

Did you read that as triscuit? 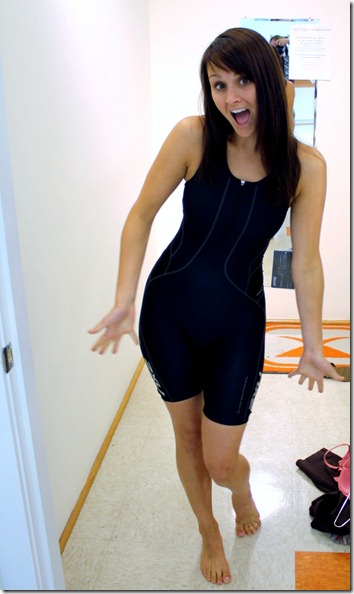 ‘Tis race season.  A bunch of my Charlotte friends are gearing up for the city’s big half marathon, and very soon, all of Charlotte’s spring and summer triathlons will kick off.   Runners and cyclists are everywhere, and the sudden burst of outdoor activity got me reminiscing on my own triathlon journey.  When I was getting ready for my first few triathlons, I had a few big questions:

Am I going to get eaten by an alligator during the swim? * (see endnote)

Am I going to wipe out on my bike?

Am I going to have any energy left by the time I get the run?

And, most importantly, what the HECK am I going to wear?!

A trisuit is designed to be worn through all three triathlon sports – the swim, bike, and run.  Therefore, it is tightly fitted, has a minimal butt pad (so that it dries faster than regular bike shorts), and a supportive shelf bra for the run.  For my initial triathlon experiences, I did not go out and buy any triathlon-specific gear.  I had a bathing suit, bike shorts, and running clothes, but no trisuit.  I tried out several strange combos:  for one triathlon, I swam in a sports bra and running capris – and then I biked in the capris.  No padding = big mistake.  For another, I swam in a sports bra and string bikini bottoms.  When I entered the first transition, I pulled on my bike shorts over my bikini bottoms, untied them, and pulled my bikini off over the top of the shorts (very sexy). 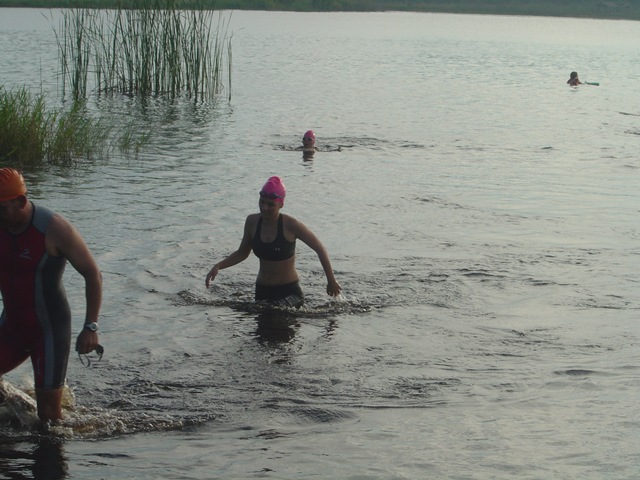 Eventually, I decided that I really did love triathlons and should invest in proper gear.  After much debate, I ended buying the 2XU 2011 Women’s Endurance (WT1778d), a one-piece trisuit. 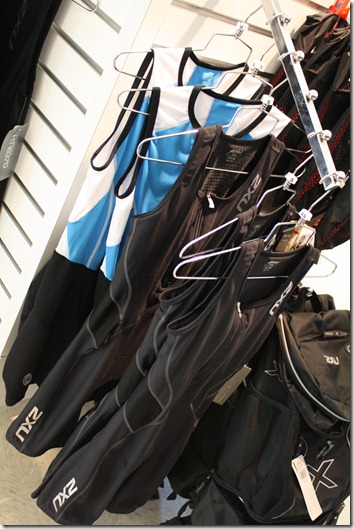 I love – let me repeat… LOVE – my trisuit.  It is extremely comfortable and never chafes.  The shelf bra actually does a pretty good job of supporting the big ole girls, although I do pull a regular sports bra on over it for the run leg (if you’re also larger-chested, check out this post:  Sports Bras for the BTC).  The butt pad dries quickly.  And it’s pretty flattering.  Win, win.

Trisuits come in two forms: one pieces, like mine, or two pieces.  Two piece trisuits have a separate top and bottom, which can be extremely advantageous when you need to go to the bathroom.  When I have to pee during a triathlon, my entire one piece suit has to come off (and it’s a tight squeeze so it’s difficult to get on and off).  Although this part of one pieces is annoying, I opted for a one piece because of the inherent drawback of two piece suits:  they often ride up.  I hate it when my top rides up my stomach during races.

That being said, I’m starting to think about investing in a two-piece trisuit for my post-pregnancy races.  If I do a super sprint triathlon in the fall, as I’m hoping to, I most likely will not fit into my old trisuit (yet).  So perhaps I should try a two piece?  Maybe they don’t all ride up.  And the peeing advantage is a big one.  I’d love to hear feedback on which you prefer.

For more triathlon-related info: Check out the So You Wanna Do a Triathlon series

* Endnote:  For what it’s worth, a man did get his leg bitten off by a gator in the same lake that I did my first two triathlons.  Granted, he was swimming alone… in a lake in Orlando, Florida… which is pretty much the craziest, most reckless thing you could do… but it still freaked me out.  Long live Charlotte, North Carolina, a gator-free zone!