No matter how fast or how slow I cross that finish line, today’s race proved to me that I’ve always got the racing spirit deep inside!  And that feels good. 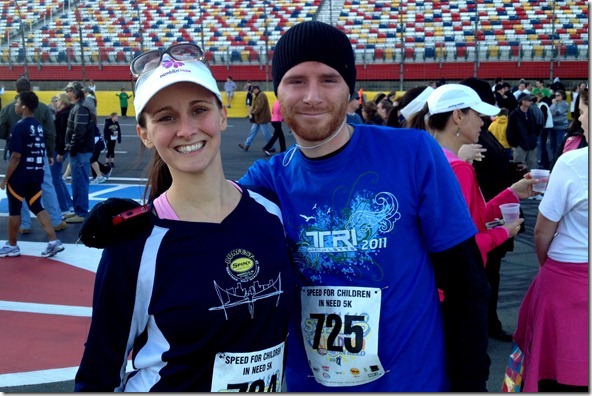 Not only was this afternoon’s 5K a great race, but it was also the very first non-Girls on the Run race that the Husband has EVER done.  He spontaneously decided to sign up this morning.  Obviously, he crushed me.  Don’t you hate it when people who don’t run regularly kick your butt?  Grrr!  Hah.

The really neat thing about this 5K was that it took place on the Charlotte Speedway – where all the NASCAR races happen.  I will definitely do this 5K next year because of the unique location. 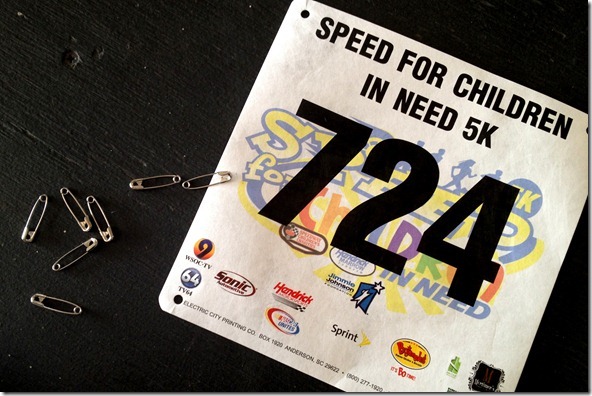 On the drive over, Kristien told me he was going to just gun it and see how fast he could go.  He’s naturally athletic and runs with about twice a week, and I suspected that he could pull out a few 8-minute miles.  He asked me for a few tips, and I said that the most important thing to remember was not to go out too fast.  “You’ll feel like you’re going slower than you actually are because of the crowd,” I warned.  “It’s better to speed up than burn out in the last mile.” 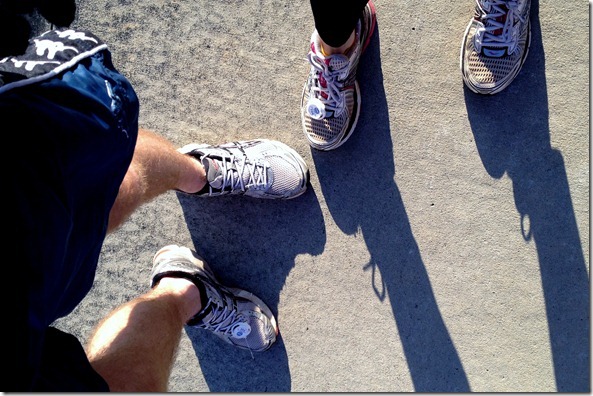 We started off on the Z-Max Dragway, a straight, flat shot.  The Hus scooted up to the front, and I hung out in the middle of the pack. 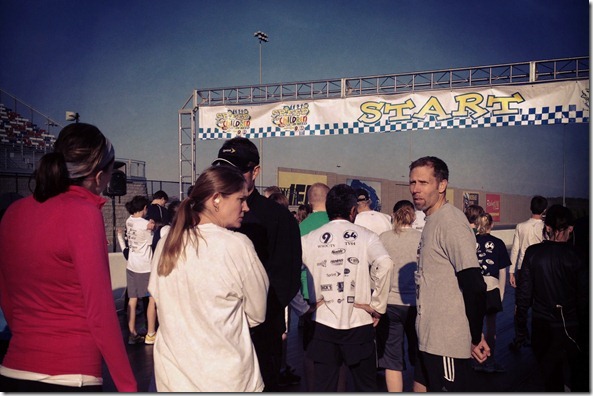 The course, as a whole, was pretty challenging, thanks to a really, really big hill that led up to a highway overpass to take the runners from the Dragway to the Speedway.  But it was also a very interesting course because there was so much to look at.  We even got to go through two underground tunnels, which was fun. 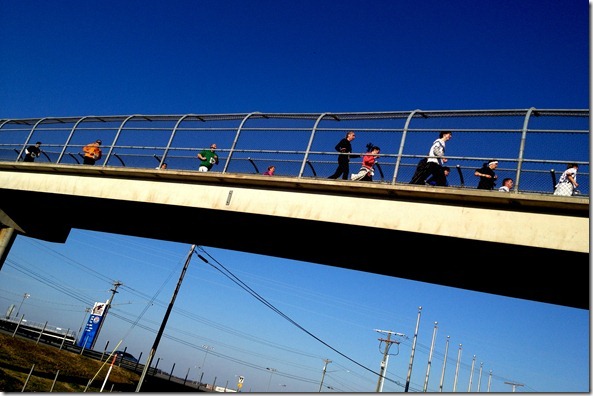 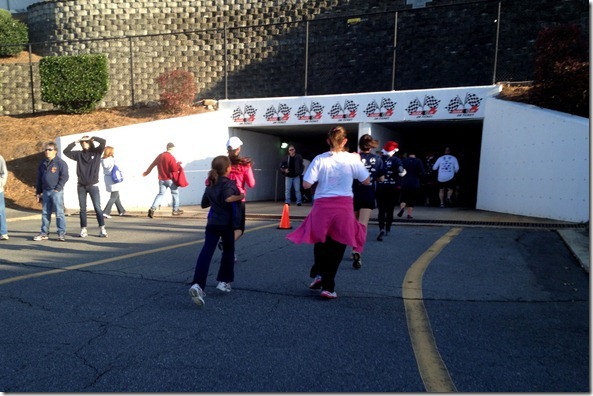 When we entered the speedway, I knew I only had 1.5 miles to go, and I was feeling pretty good, so I started to pick up my pace a bit.  I didn’t want to push myself too hard because of BabyHTP, but man – it sure felt good to get back into that racing mindset and really buckle down and give it a strong effort.  It was so fun!  I had a big grin on my face as I came up on the water stop.

I grabbed some water and continued on.  People warned me that the slope of the track might be troublesome, but the section that we were running on really wasn’t that slanted. 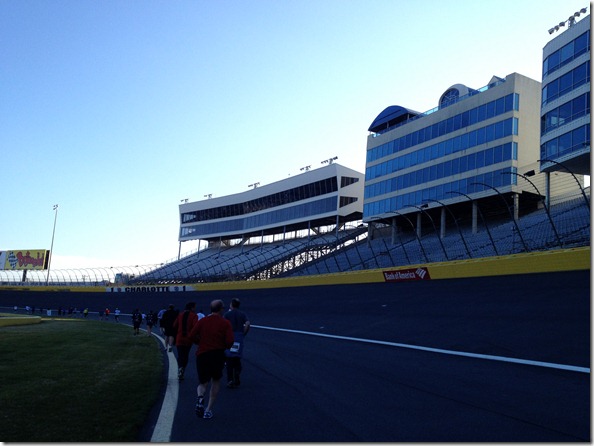 At this point, I could see the finishers coming in on a big television screen.  I kept looking for Kristien because I knew he would be done soon but never saw him cross. 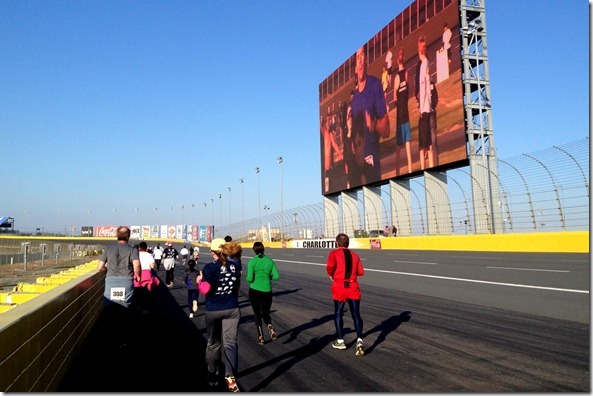 By Mile 2.8, I was feeling good.  Really, really good.  So I started to ‘rabbit’ people – this is a technique I use to pull myself forward during races.  I’ll pick someone in front of me, visually lock in on them, and just put the metal to the medal until I reach them.  Then, I’ll pick another rabbit and work towards them.

I was so focused in the last sprint that I passed not one, not two, but three men who all looked like they were working really hard!  It was so exciting.  Go baby, go! 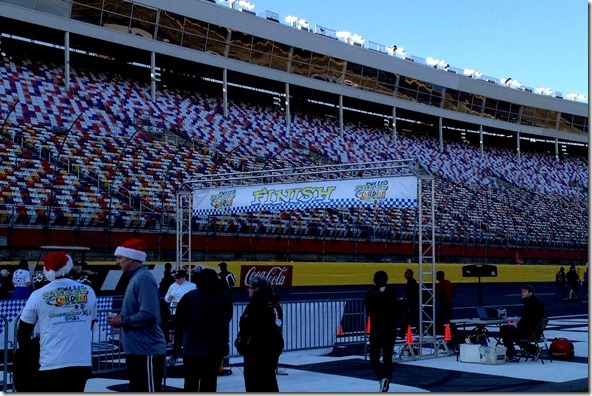 …And then I found the poor Husband.  He was sitting in the grass, looking like he was about to puke. 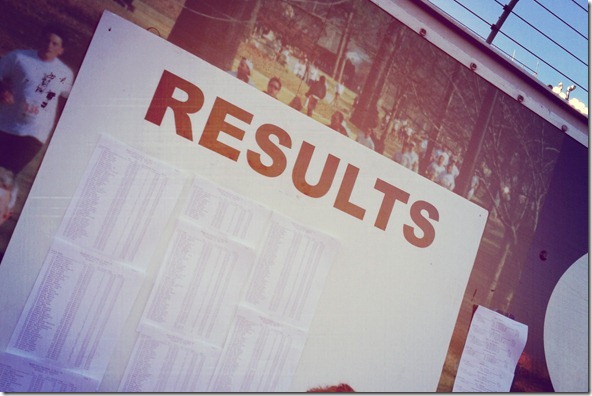 And that’s when he told me that he did, in fact, puke… right after the first mile marker (and yes, he told me I could tell you this story).  He thought he just started off to quickly and was too excited.

But get this – he still managed to finish in 25:34, an average of 8:15-minute miles.  Pretty good for someone with no serious 5K training and a glorious yak under his belt!  We had a good laugh because I also puked after coming out too hard during one of my first races – maybe race yakking simply runs in the family…