Selling the Girl Next Door

On Sunday, I watched a CNN documentary entitled “Selling the Girl Next Door.”  The documentary was about the sex trade in America, and how young American girls (as well as foreign girls) get forced into prostitution by pimps.  The world’s oldest profession has been transformed by the Internet, making it easier for pimps to sell underage girls.

After watching Selling the Girl Next Door, I was so saddened and appalled that this is happening to young girls… right under our noses and on sites like Craigslist and Backpage.  It was especially frightening to me to think that my target audience for the book I’m writing right now is the exact average age that girls get forced into prostitution.  I wanted to do something to help these girls… but I wasn’t sure what I could do.

Then, I got this email from a reader named Maria.  The universe was providing me with an opportunity to help…and I hope you will help, too!  Maria works at a shelter that helps girls like the ones I saw in the documentary.  Here’s her story:

I recently reached out to Caitlin when she posted on Twitter about a CNN show she was watching about sex trafficking of teens. I currently work for a group home that CNN will be highlighting later this year for young girls that have been sold into prostitution.   143 years after passage of the 13th Amendment to the U.S. Constitution, there are more slaves now than any other time in human history.  Shockingly, more than 15,000 women and children are trafficked in the U.S. each year (Americans trafficked by Americans) and the majority are between the ages of 11 and 17 years old, but can be as young as 5 or 6. This number does not include the thousands of foreign women and children that are brought into America each year. 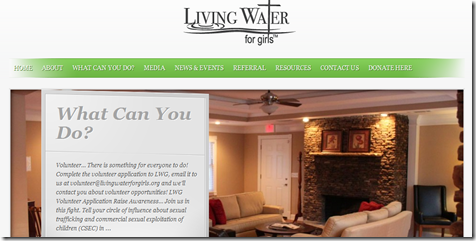 There is a severe lack of protective shelter for victims of commercially sexually exploited children. The lack of protection has caused inappropriate placement for these victims into juvenile detention facilities that do not offer the protection and help these girls need. They are treated like criminals instead of victims. These girls cannot return home due to identity protection from pimps and other risks.

Living Water for Girls provides a safe place for young girls between the ages of 12 and 17 that have been exploited sexually. I cannot express enough how impressed I am with these girls every day. For example, “Lauren” had the worst situation of all the girls we currently house. Lauren was raped at the age of 10; the next year she ran away from her home where her uncle had constantly molested her. Within 42 hours of being on the streets she was picked up by a pimp that took her to a different state. She was then forced to make $1,000 a night-which sometimes took 10-15 different men to make the money. Her pimp would not feed her and refused her water. The only bath she was allowed was once a week in a certain gas station restroom, where the sink was broken so she was forced to clean off with toilet water. Lauren was constantly beaten, had cigarettes put out on her, and was forced to walk around naked in front of her pimp’s friends as a form of punishment.

Lauren was finally found abandoned and handcuffed to a bed-she had been there for a week before she was rescued. She was sent to our home, states away from her own home, under a protective order. When Lauren first got here she was uncontrollable, refused to do anything, and was belligerent. Like most girls, Lauren’s self-esteem was built on the fact she could sell her body. She once told me the only thing that makes her feel good about herself is, in fact, selling her body, because she knows the men like it. She says she has always been teased and called ugly. Over her stay here she has made tremendous strides. She has the best personality of any 12 year old I have ever met, she is extremely smart, and cares more about others than she does herself. I have learned more from her than I could ever imagine. I hope to have the opportunity to save more girls just like her.

Due to lack of state and federal budget resources, we are one of the few homes for girls nation-wide that concentrate on commercially sexually exploited children in America. Because we are not a state-funded home, we rely solely on donations and people’s kind hearts to keep us running. Donations are used for groceries; toiletries; basic needs of the house, like paper towels, soap, toilet paper, laundry detergent, bills, etc; clothes for the girls; and scholarships for girls to come here.

If you would like to make a donation, please visit our website, Living Water for Girls and click "donate here".  You can also view pictures of our beautiful facility on our website.   Even $5 would help our home tremendously. Three of the worst things a child can experience are molestation, rape, and inaction. Let us not further add to their victimization by being guilty of inaction.