Spending the day watching football in Clemson was so much fun – and it was even better because the Hurricanes won.  :)  The town of Clemson was so alive and welcoming today – I loved it! 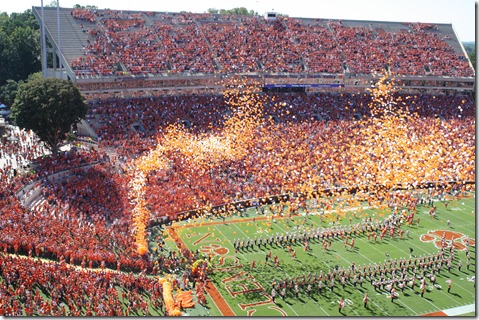 Even though I didn’t go to sleep until 1:30 AM or so, my alarm was blaring at 7:15 (the Husband LEFT at 7 AM), and by 8:00, Jen and I had pulled out of the house to make a quick Starbucks run.  Then, the ladies and then boys met up to tailgate for a few hours before the game began.  I really liked Clemson’s tailgate atmosphere – the area we were in was super family-oriented, shady, and relaxed. 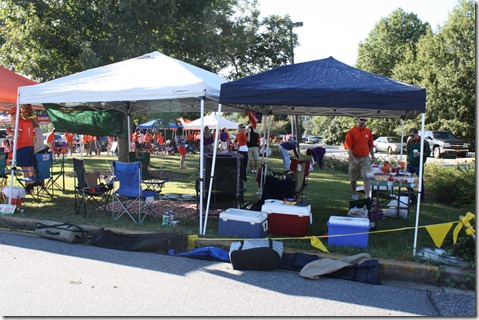 Michelle, Jen, and I: 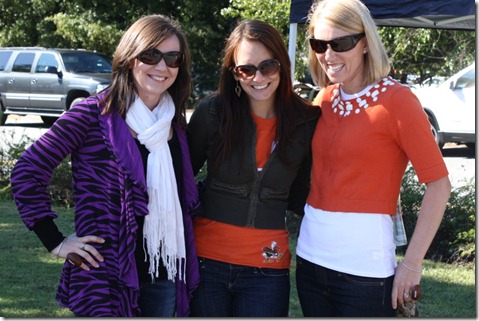 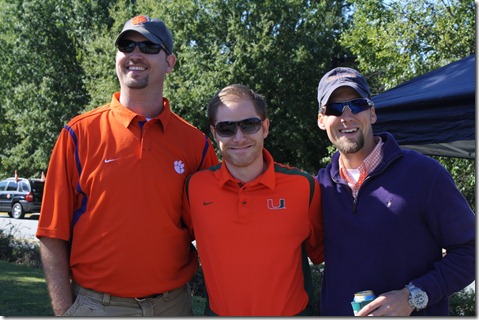 It was actually pretty chilly this morning (Michelle was smart and brought a blanket to sit with! I was jealous).  It really warmed up though – I ended up getting burned from sitting in the sun during the game. 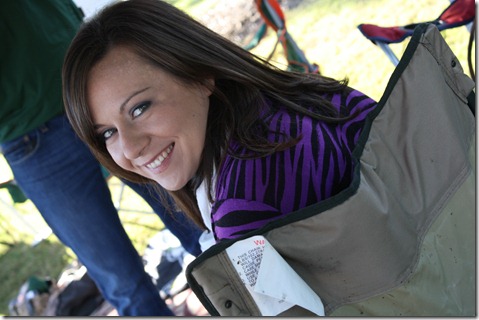 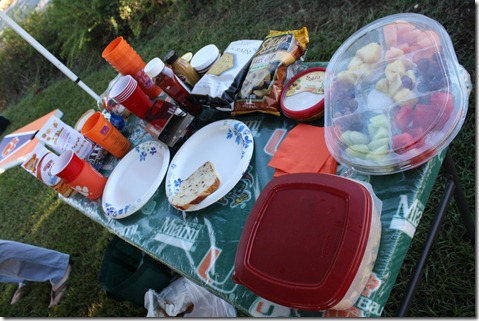 I had some fruit, a pumpkin and chocolate muffin, and a slice of cinnamon bread: 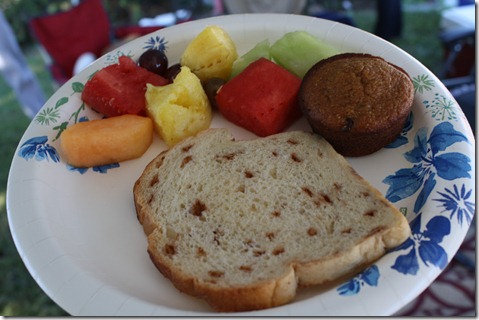 Go beg Jen for the pumpkin and chocolate muffin recipe!  It was epic. 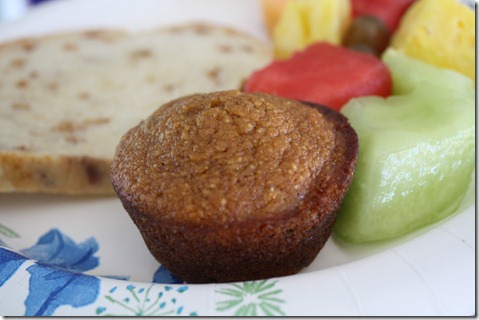 After digesting, it was time for some corn hole.  What do you call this game where you live (if you play it during your tailgates!)?  I’ve heard it called so many different names, but I prefer corn hole. 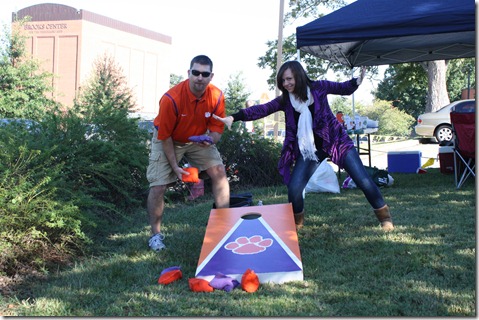 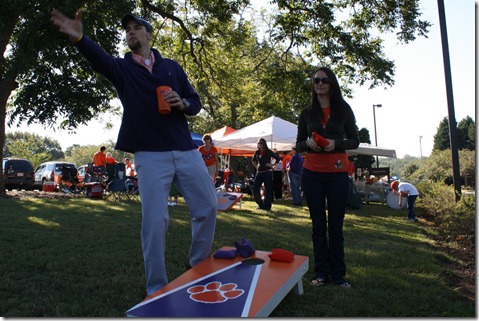 I didn’t make a single shot until I drank half a Miller Lite.  Beer is a performance enhancing drug for tailgating games!  :)  After drinking half a beer, I promptly made a number of shots.  Go figure. 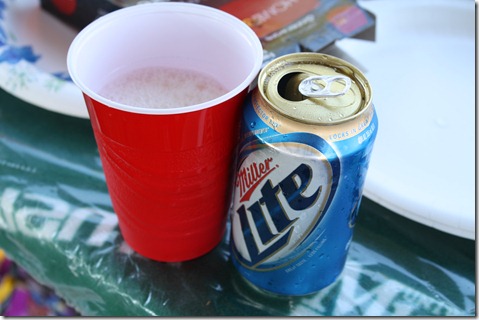 During the tailgate, I got to meet Katherine, who goes to Clemson.  I know her through Twitter!  So fun.  :)  She confirmed for me that it’s true  – Clemson is just dripping in Southern sweetness and hospitality. 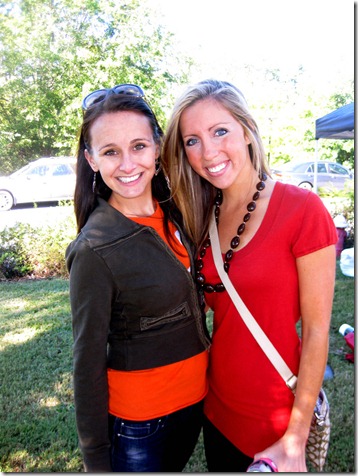 My experience with stadium food is that it’s 1) expensive; 2) unhealthy; and 3) not vegetarian-friendly.  Michelle and Jen warned me that the food in Clemson’s stadium wouldn’t be very good, so I ate a veggie burger on half a whole wheat bun before we went in. 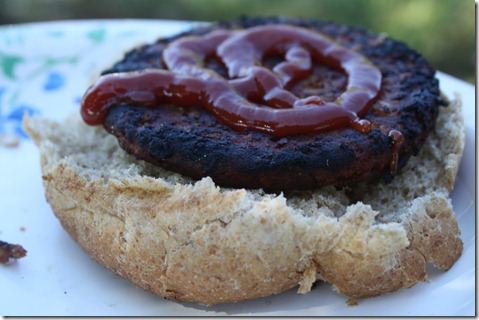 Then it was time to walk into the stadium!  I loved that Clemson’s stadium was right in the middle of campus – so cool.  Much more conducive to creating school spirit than a stadium that you have to bus students to, if you ask me. 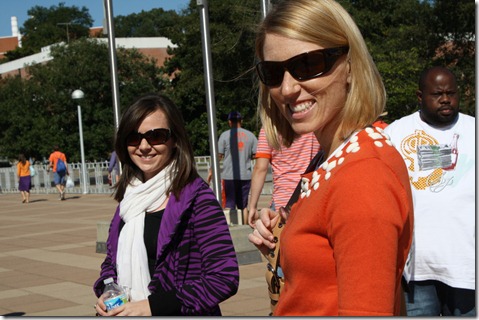 The game was completely sold out because it was their Homecoming game (and Miami has that effect on games in general)!  There were tons of people outside the stadium begging for tickets. 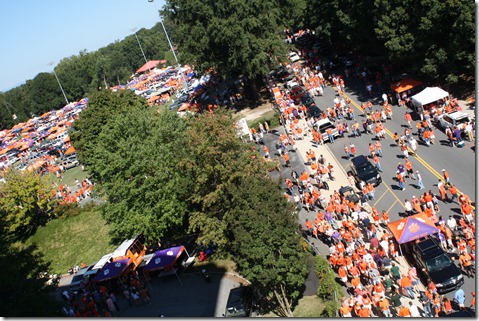 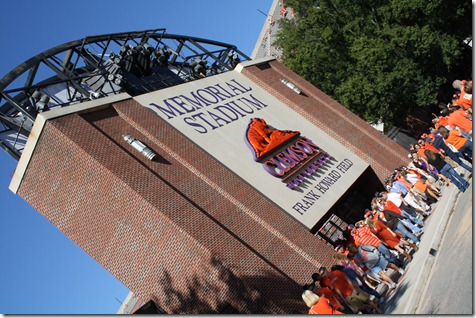 Due to our new budget, this might be the only Miami game we’ll get to go to this year (well, we might go to Miami v. Duke in two weeks because it’s so close).  :(  Last year, the Husband went to ten games, and I think I went to five or six. 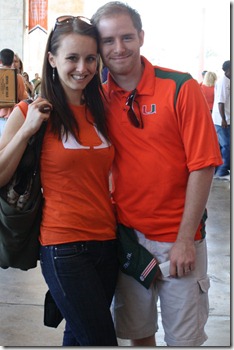 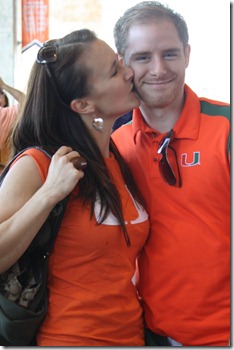 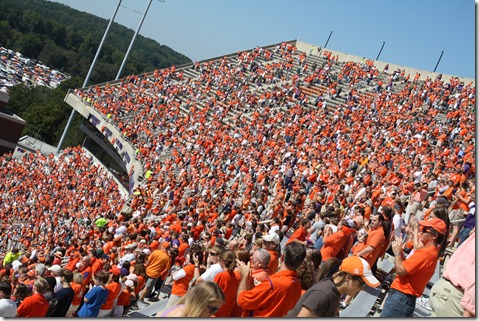 I loved the release of thousands of orange and white balloons at the start (and then I couldn’t help but worry about the environmental impact of all that trash!). 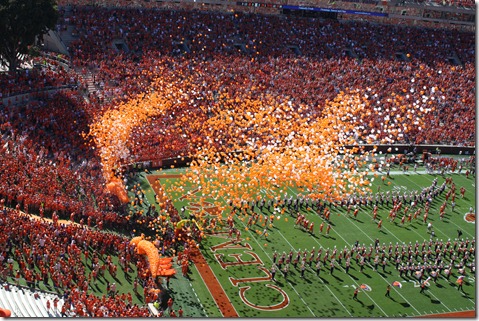 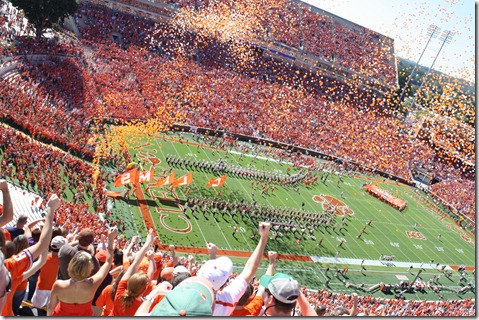 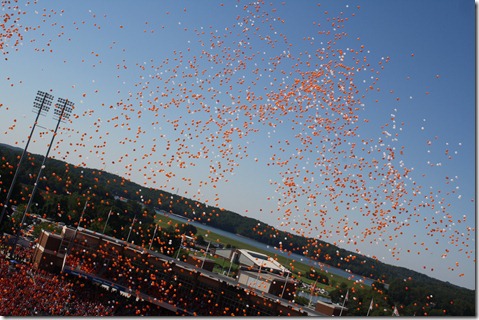 I snuck some food into the stadium, such as carrots and sugar peas. 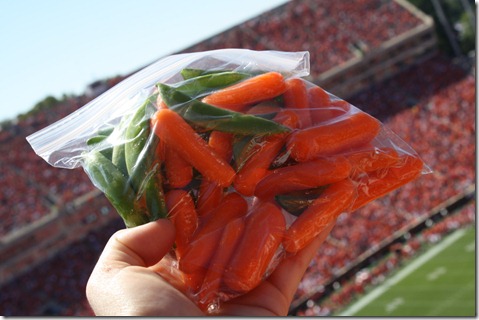 This hemp and flax bar, which was alright. 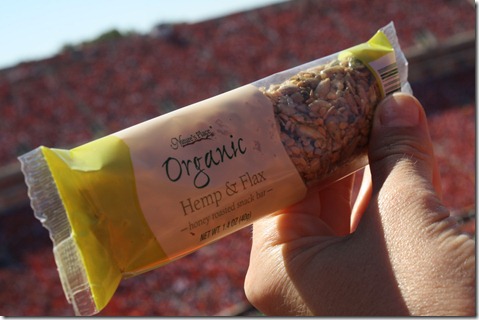 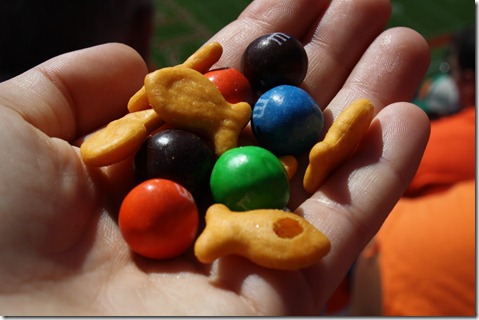 The game was a good one, but it was LONG.  And by long, I mean longer than most football games.  :)  It was televised so there were tons of commercial breaks and both teams seemed to take a time-out every two minutes for shady calls.  Once it was clear that we were going to win (sorry, Clemson!), I just wanted it to be over.

While stuck in traffic on the way back, the Hus and I broke into the leftover fruit. 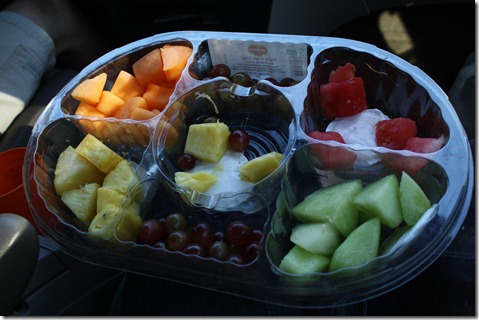 And I scourged up dinner from more tailgate leftovers before we left Jen and Jeff’s. 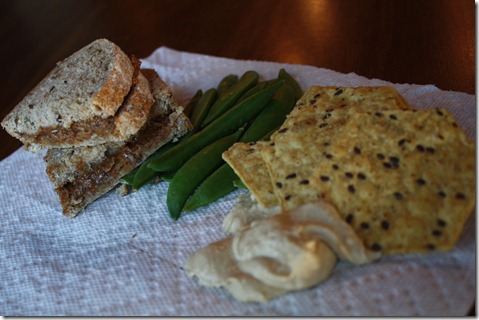 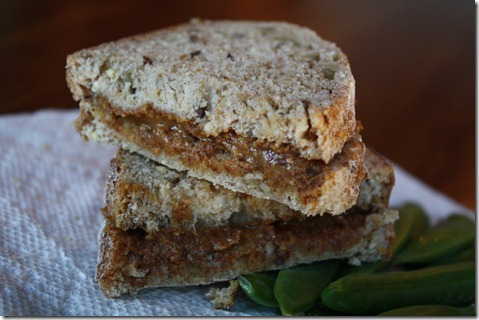 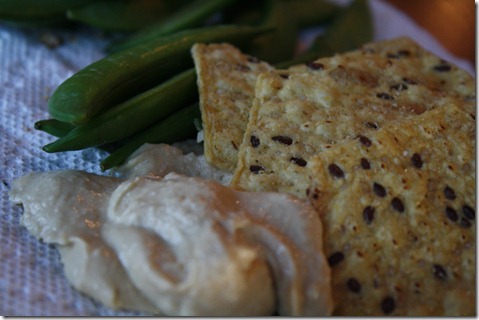 I’m actually writing this post as we drive from Clemson to Charlotte.  I am SO ready to be home and crash in my own bed, especially because I’m waking up and running 17.0 miles tomorrow.  This is definitely going to be the make-it-or-break-it run for my last-minute marathon in four weeks.  If I can’t do this comfortably… well, I’m not sure what will happen!  I’m just hoping it goes well.