The animals wanted a chance to say hi and tell you what they’re up to these days! 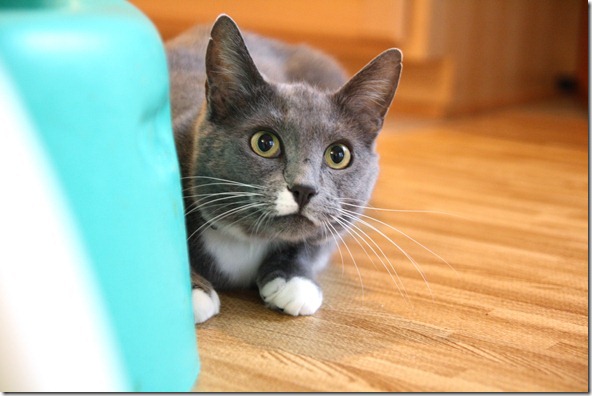 Let’s start with the newest member of the zoo family – Pippa the cat.

Pippa is adjusting nicely.  She’s a talkative, engaging cat.  She likes to cuddle in bed with Kristien and me as we read at night.  Plus, she is very food-focused and meows incessantly if I don’t feed her fast enough in the morning!  Pippa tricks us into double-feeding her a lot (and hence, the dogs get double-fed a lot now, too) because she’ll whine like she’s starving to the one human who is unaware she already had breakfast.

I’m pretty sure she is in charge of the dogs now. Sometimes, she gives Maggie a nice firm smack out of nowhere, for no reason.  But occasionally, they cuddle up on the couch and give each other kisses.  And James teeters between looking love-struck and being frightened by her.

During the day, she’s a lurker – always hovering at the edge of the activity.  But at night, she goes wild and bats around Henry’s toys.  I hear her running laps up and down the stairs around midnight. 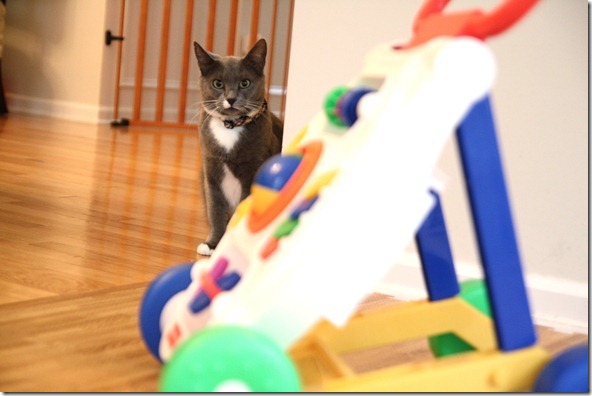 However, we’ve had a few bumps in the road.  We tried using a covered litter box but after a few weeks, Pippa went on litter strike.  You guys warned me that this could happen, so I wasn’t too surprised – until I couldn’t ‘fix’ the problem!  I tried everything; I switched litter brands, got her a second box, took her to the vet for a check-up.  Nothing worked!  Until… I capitulated and let her sleep in bed with us at night.  I think it had nothing to do with the box/litter and everything to do with the fact that she felt lonely in the evenings. Now that’s she’s allowed in and out of our room, there have been no more pees. 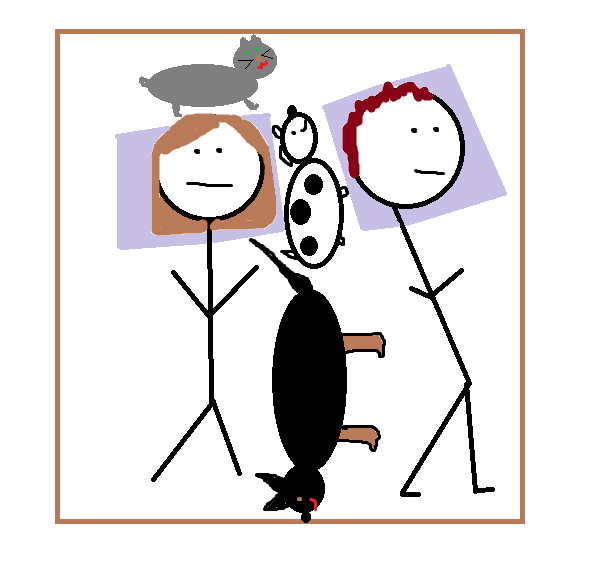 It’s crowded in our queen-sized bed.

Henry likes Pippa, too.  He has figured out how to make her play and spends a lot of time waving her birdie around. 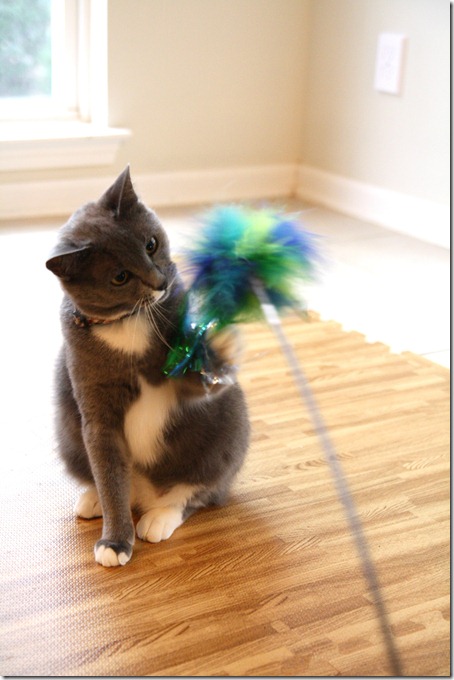 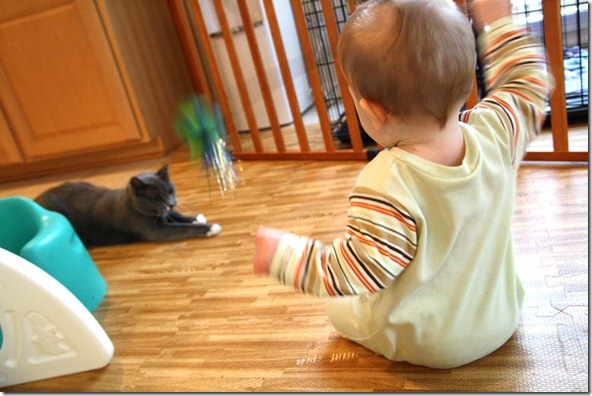 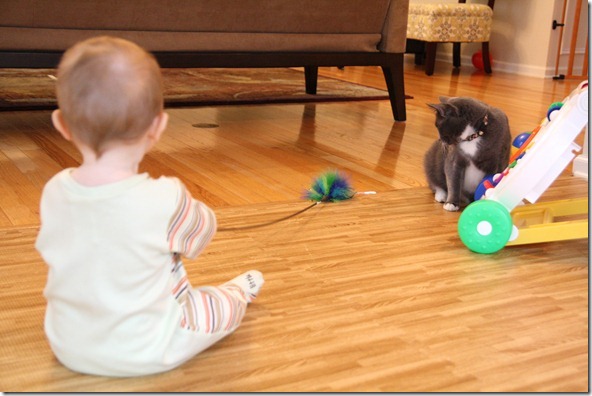 Okay… next pet.  James is doing well.  He just had his 7th birthday!  He likes staring at Pippa, as I mentioned, but otherwise, not much has changed in his world.  He’s still not super into the idea of a baby and tends to get up and scoot away if Henry comes too close.  I’m hoping they will bond eventually… we’re practicing ‘gentle hands’ with Henry; that should help. 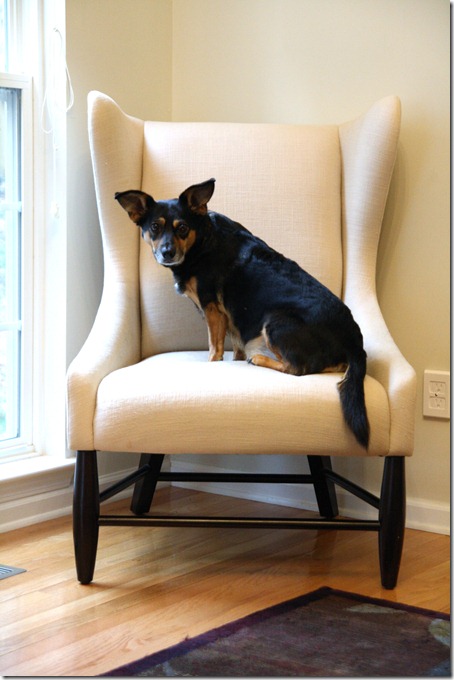 He spends almost all day in that chair… unless he’s going on a walk, which is definitely his favorite activity.  I started doing a ‘star chart’ for myself again – it’s taped on the fridge.  I try to give myself (or the Husband) two stars a day for two James walks.  It’s a corny trick, but it definitely works.

And Maggie…. well, Maggie is Maggie, but that’s no surprise, right?  She’s still silly. Her world revolves around food, which means she’s extra-happy that Henry is eating solids (and tossing bits over the edge of the high chair).  I still have to drag her out of the house for even the shortest of walks – that dog would really be perfectly okay to sit on the couch all day.  She’s best friends with Henry and loves all the extra attention he gives her. 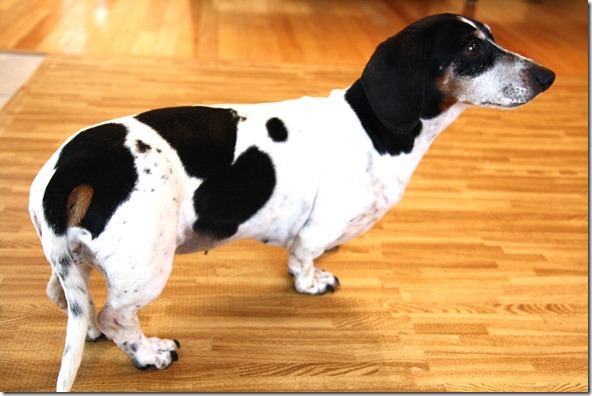 Having so many pets plus a baby does feel like a lot (you should see how they ALL follow me from room to room… like a herd) but I wouldn’t have it any other way.  Our dogs have been with us for almost six years, and they hold a special place in my heart.  And Pippa is definitely earning her spot, too – she’s such a sweetie.  Henry loves to interact with the animals, and I feel like owning pets will really enrich his childhood.

My favorite part of the day is definitely the morning.  I wake up and tend to everyone’s needs.  Everyone gets cuddled, let out or changed or scooped, and eats their breakfast.  It’s a very nice morning routine, and it’s a comfort to me to go through the motions of taking care of the babies, furry or not.