Do you have any idea how much fun it was to compile the Sweet Santa / Scary Santa posts?  I can’t even put it into words!  And let me tell you – while it was difficult to choose the finalists for the Scary Santa post (which is going up tomorrow), but it was even harder for Sweet Santa.  Every baby and kid looked adorable, and every Santa looked jolly and fun.

Up first are our…  Honorable Mentions of Cuteness

Cori wrote, “We always go to the same Santa.  This year, I made tutus and lace collars for the twins to wear.  Audrey, the older but smaller twin, decided that it made a better headband.   But with those sweet smiles, I’ll take it.” 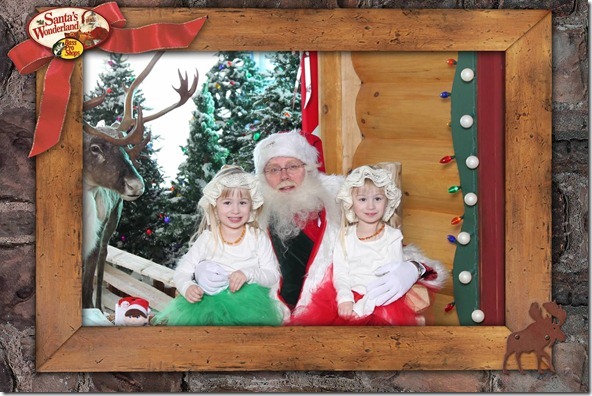 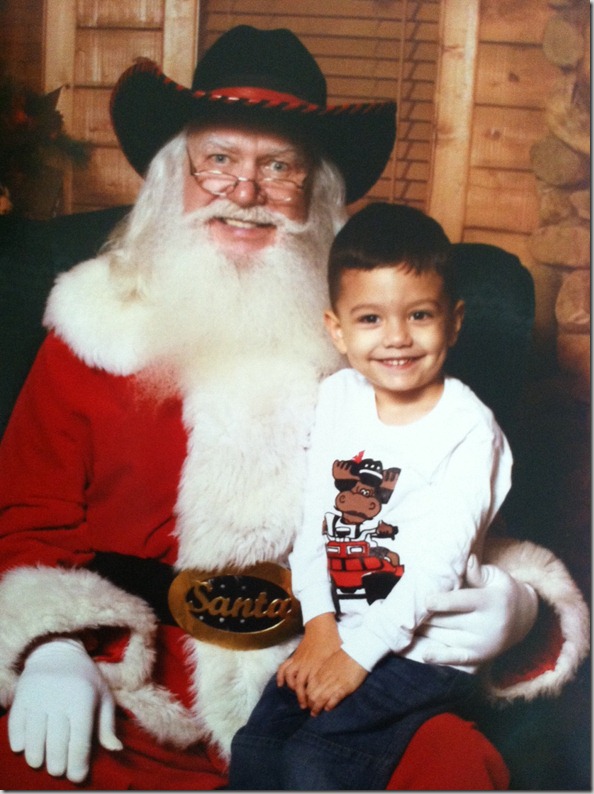 Kristen says, “This year, my daughter Sonia was alright with Santa.” 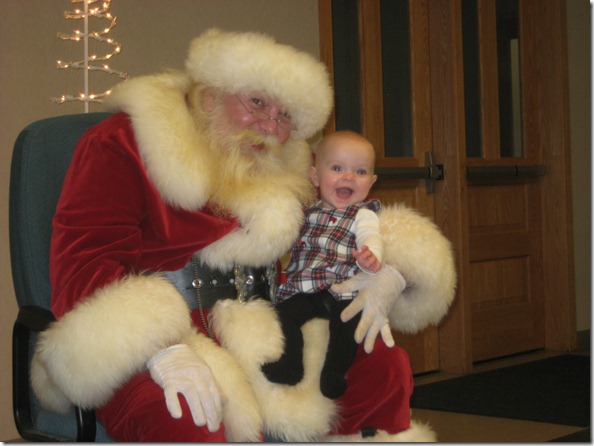 Barbie wrote, “Cousins Sierra (blonde) and Ainsley (brunette) and of course their favorite carry alongs. My child is never without a dog and Ainsley has a snowman.” 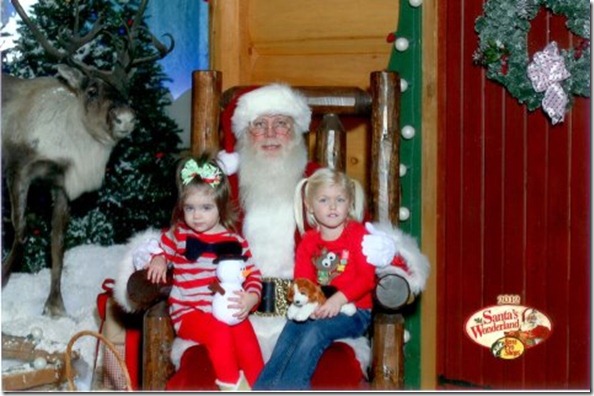 Holly says, “This is this year’s picture.  Sam is 3 and was so excited.” 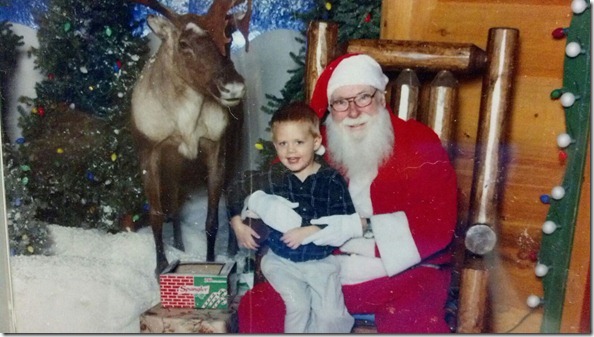 Jennifer says, “This is 4 week old Fergus with his papa and I (and I’m looking up and looking nutty), taken in Bangkok, Thailand where we currently live, at a Christmas party thrown by the hospital where he was born!” 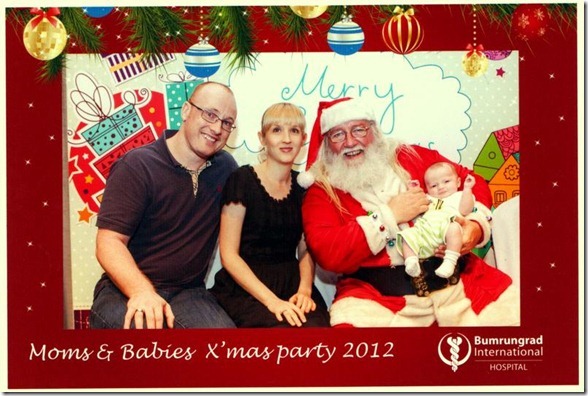 Joanna wrote, “This is my little 13 month old Neil with Santa! He was totally amazed and then turned forward and flashed his toothless grin!” 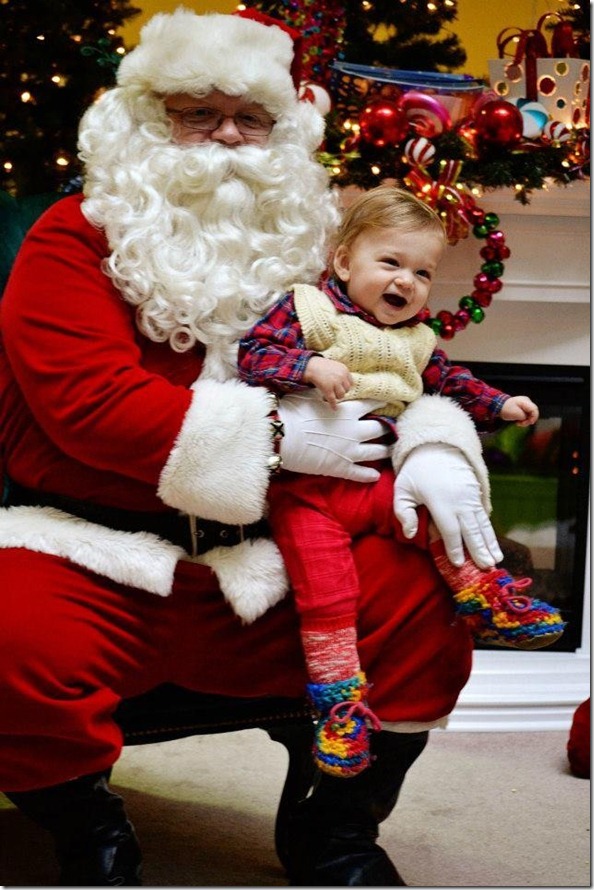 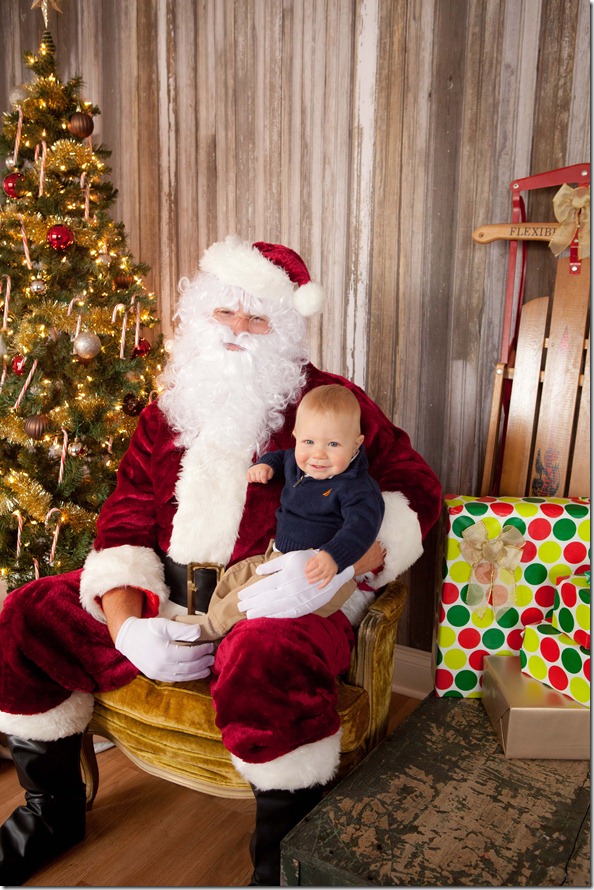 Jessica says, “This is Raymond; he is six months old.” 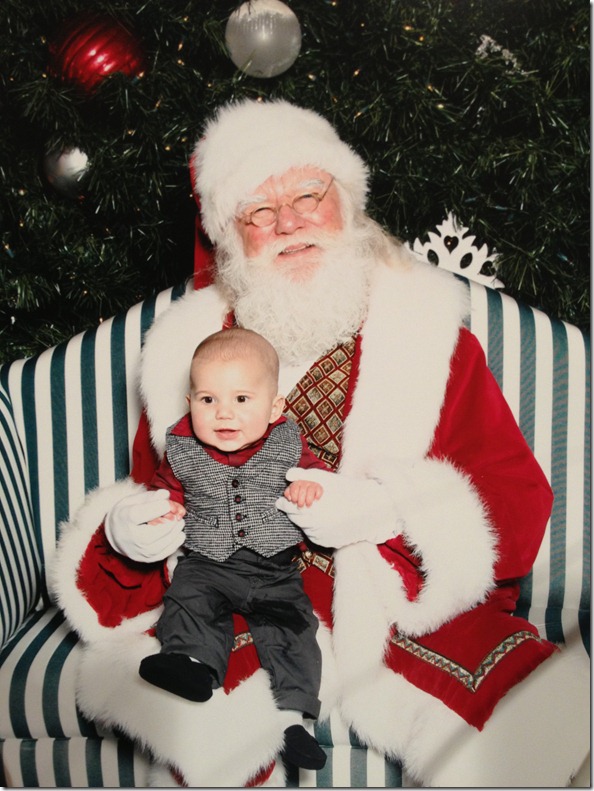 This is Chrissy’s cutie: 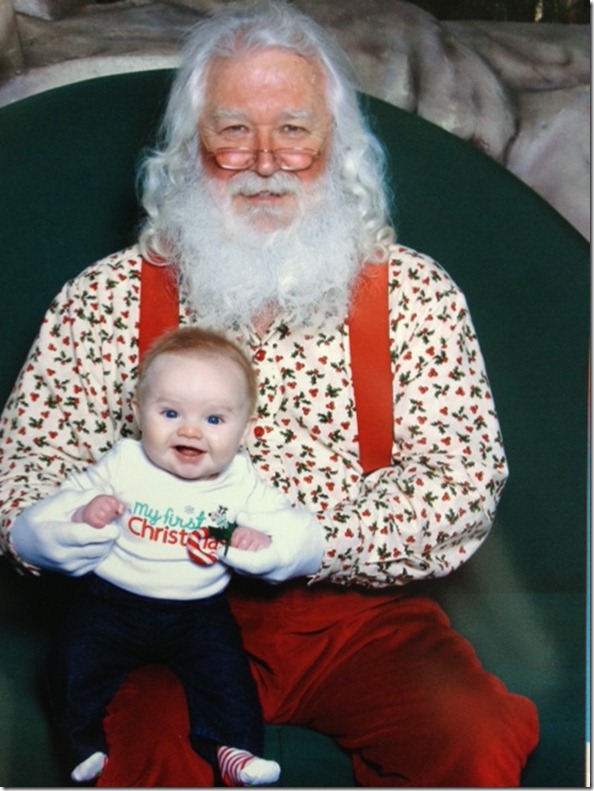 Heather wrote, “Landon and Santa!  Although, Santa looks like he could use a nap!” 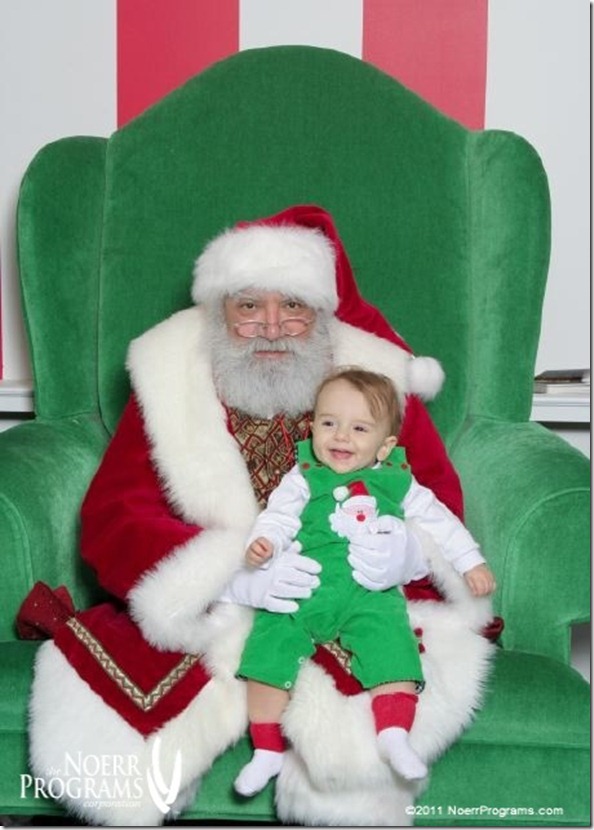 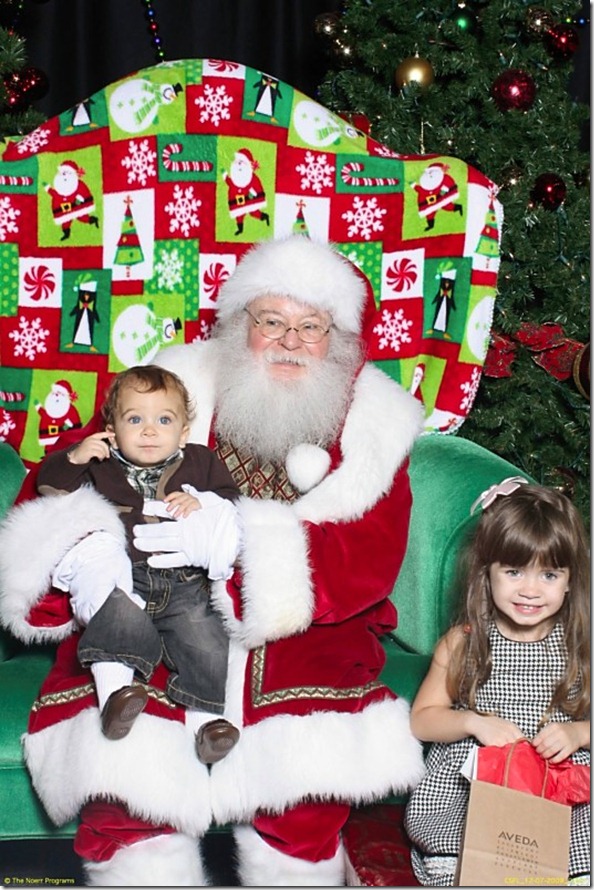 Stephanie thought her Santa did not look amused as he held her little cutie Liam. 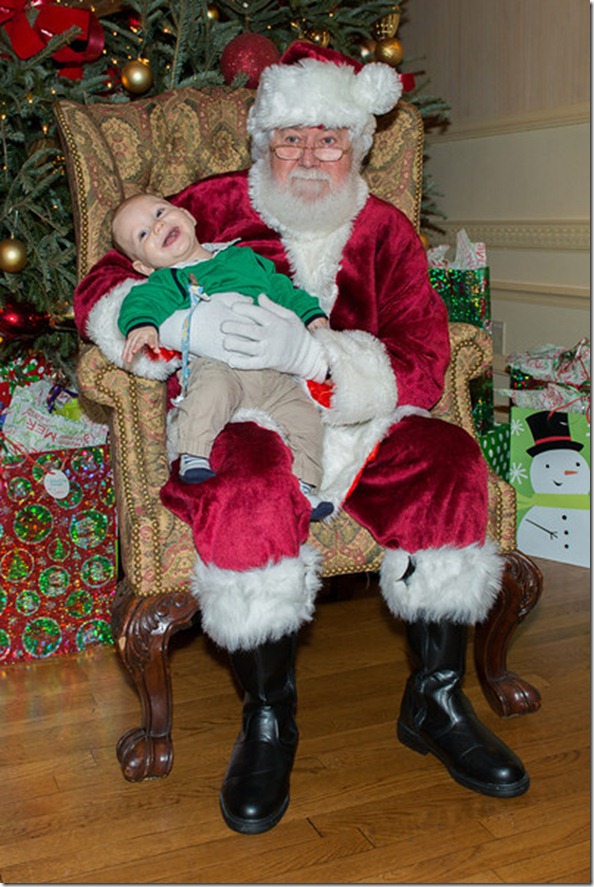 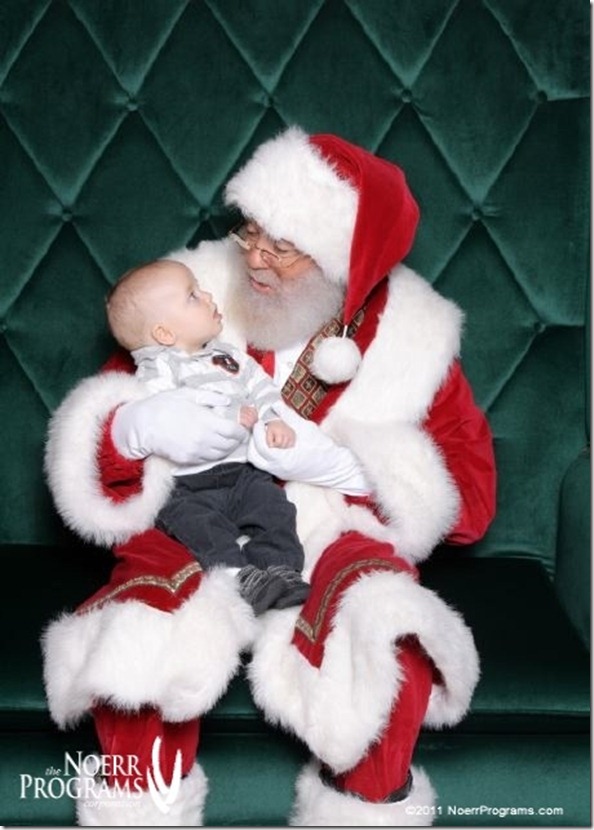 Jill said, “This is my 3-month-old daughter Alexis with the Santa that visited her school! She’s not scared, just kind of "Eh… whatevs." She’s wearing a cute gingerbread outfit!” 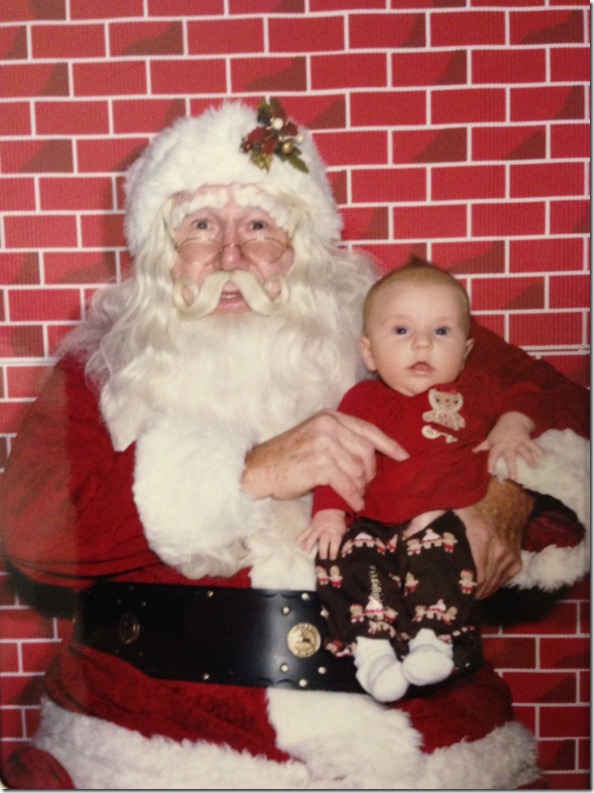 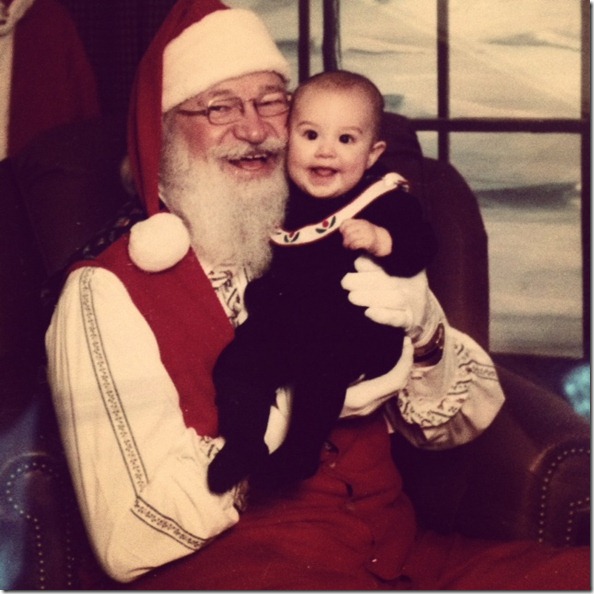 Sherri wrote, “Here is my sweet niece Charlotte with S. Claus himself. Have you ever seen a 6 month old so happy to be on Santa’s knee? She was laughing and smiling away with him the entire visit. I think I know who’s on Santa’s ‘nice’ list this year” 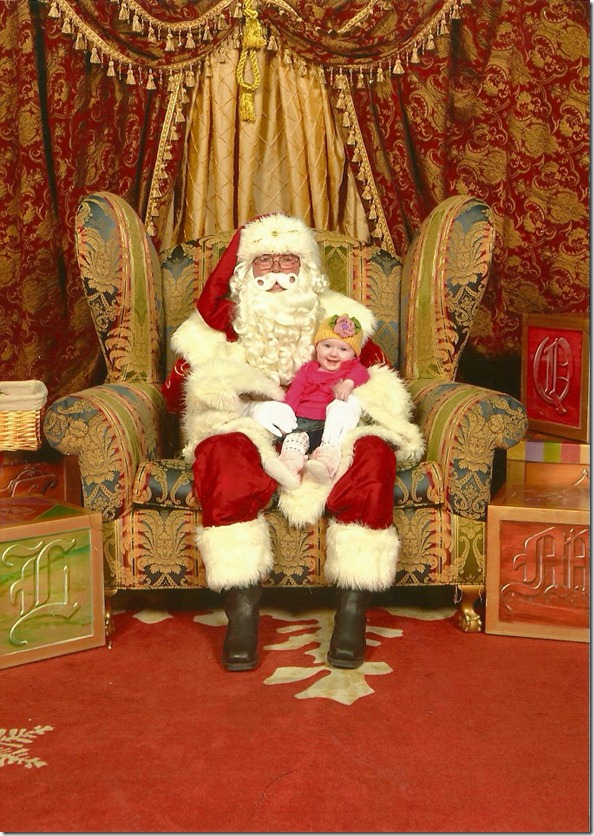 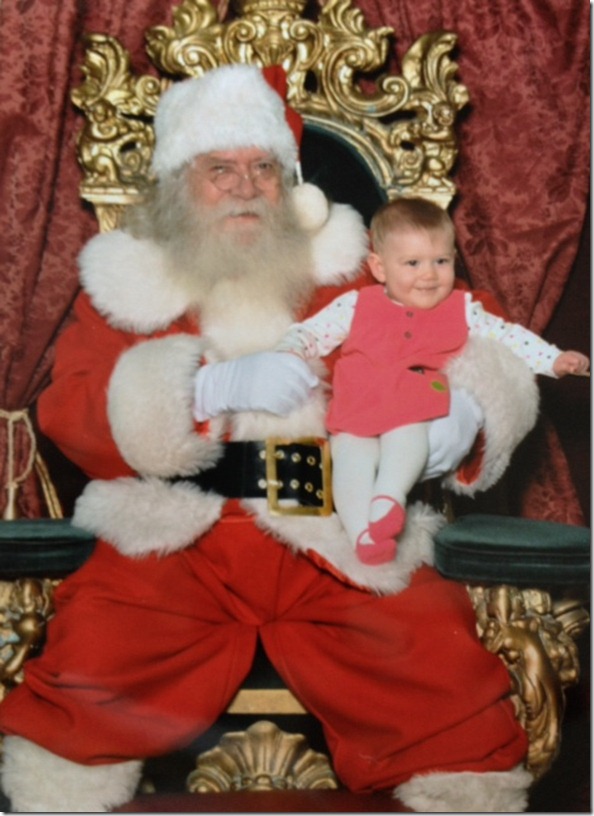 Christine said, “This is a picture of my 4 month old Miles Henry with Santa a few days ago. Like you I wasn’t sure if this would be a sweet or screaming picture but he ended up liking the jolly old guy!  Next year will be a whole different story!” 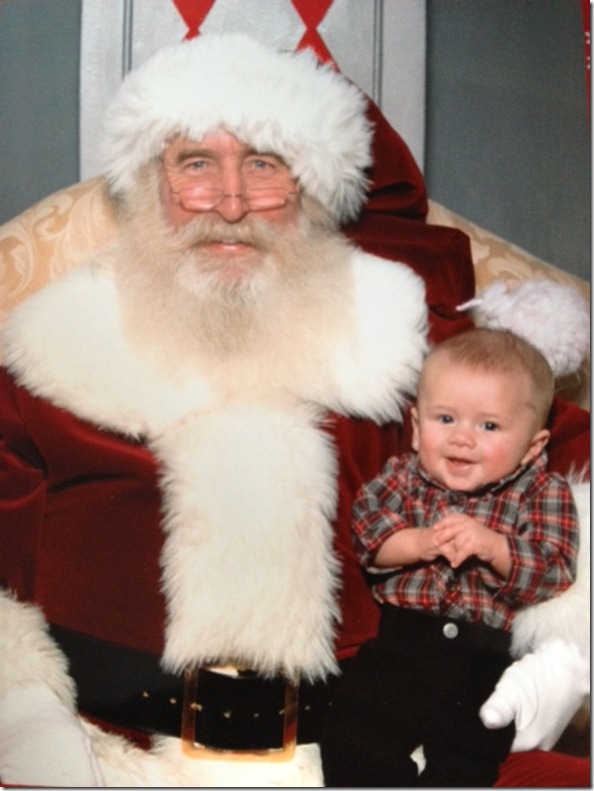 Kendra wrote, “So bummed you can’t see my son’s face in this one but I thought it was cute how they are looking at each other. Plus, that is one convincing Santa if you ask me!” 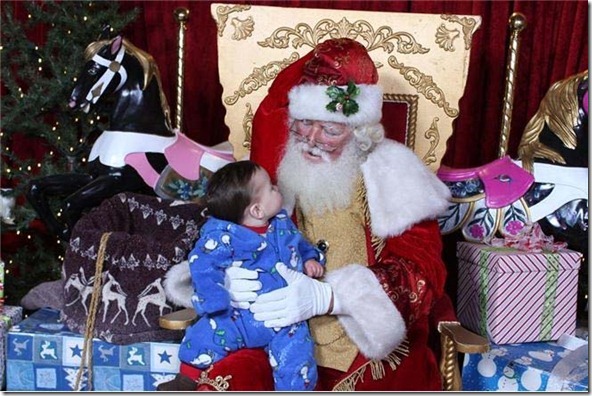 Dawn Marie said, “This is M at 5 months old with Santa.”

Jenny wrote, “This is my furbaby Corky.  The mall near my house does “Santa Paws” on Monday nights in December, so we were in line with a bunch of other dogs and little kids…total chaos.” 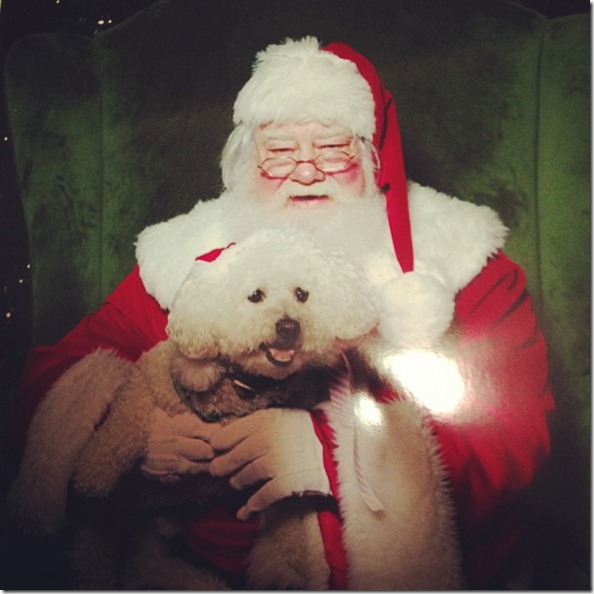 Jennifer said, “My daughter Hayden (age 6 months). She seemed pretty unaffected by Santa.  They had a nice chat and we went on our merry way.” 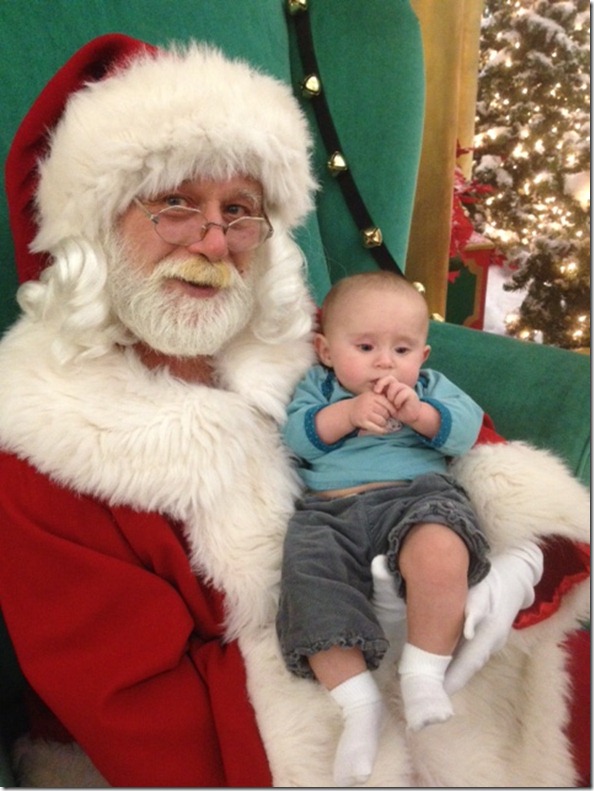 Lisa wrote, “There’s no wonderful expressions, but there’s more of a complete indifference mixed with some big time curiosity about him!” 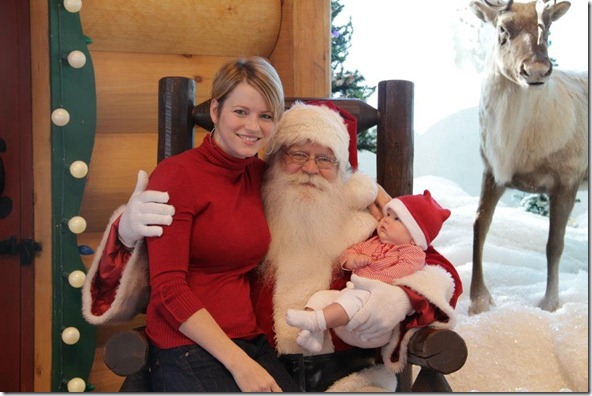 Rachel says, “These are my one year old twins with Santa.” 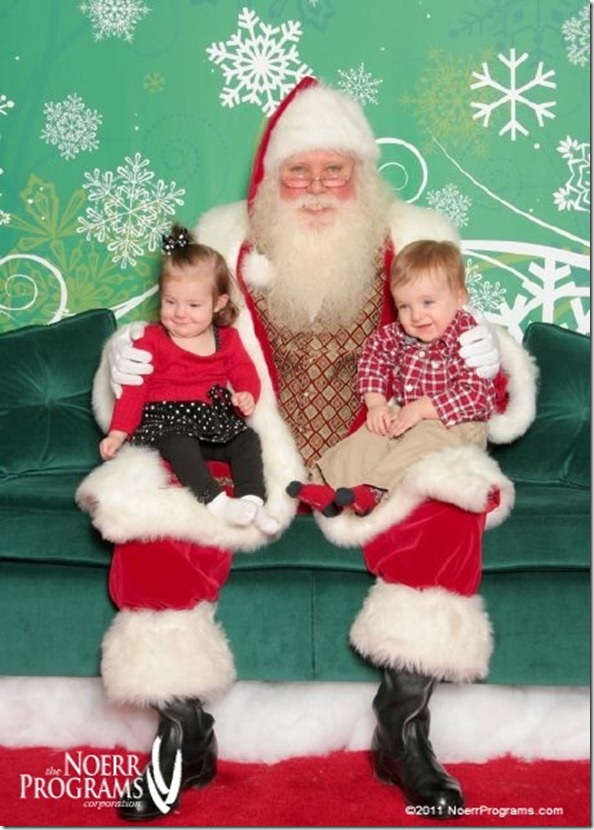 Sarah said, “I usually do not let strangers hold my babies, but this Santa was the real deal. He has 8 kids and 16 grandkids, and was so gentle with my daughter, Mary, that I felt instantly at ease. This picture was taken last Wednesday (12/5), when Mary was just 5 days old! He’s been Santa for 10+ years, doing the lightings in downtown Cincinnati with the Mayor several times — and Mary was his youngest baby ever.” 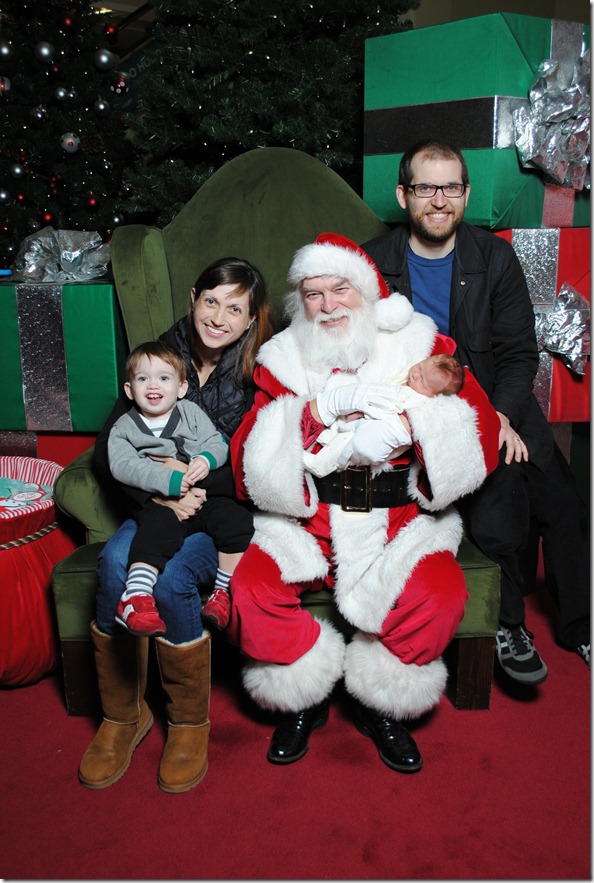 Drumroll, please….  I am pleased to now show you the finalists.

Up first, we have Callie and the Mini Athlete.  A jolly Santa, a cute little boy, and a pretty epic green screen.  Callie said, “Extra points for the bare feet in the snow scene? He’s a Florida boy! :)”  The bare feet totally got me.  Nothing cuter than baby feet! 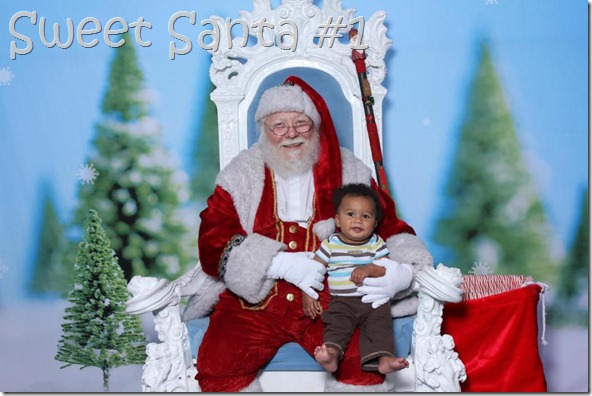 Here is Lauren’s little man, Elliot.  He’s a finalist because 1) check out that sweet little mini-Santa outfit, complete with fuzzy booties; 2) How did she get him to look into the camera so perfectly? and 3) I;ve never seen a tidier Santa beard.  Lauren says, “This is Elliot; this is last year’s picture – he was 6 months old.” 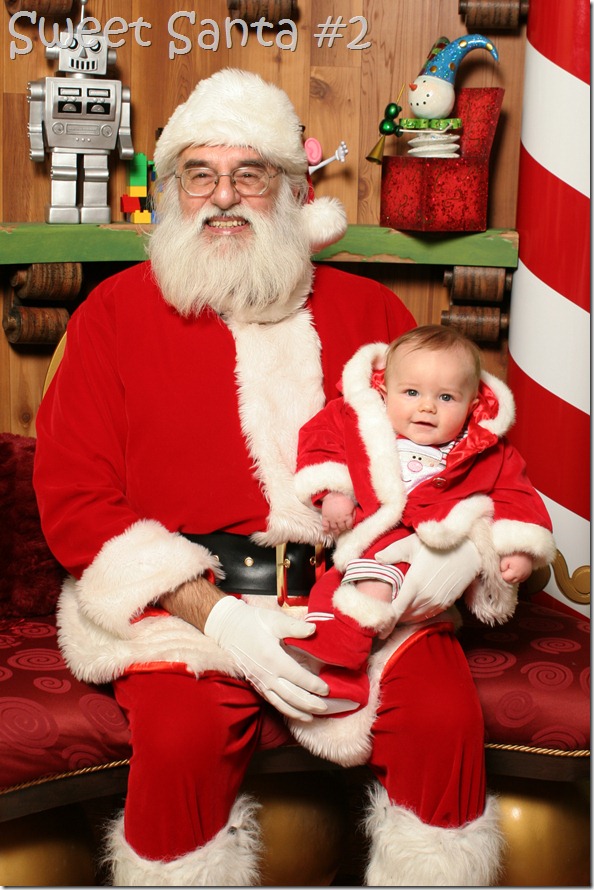 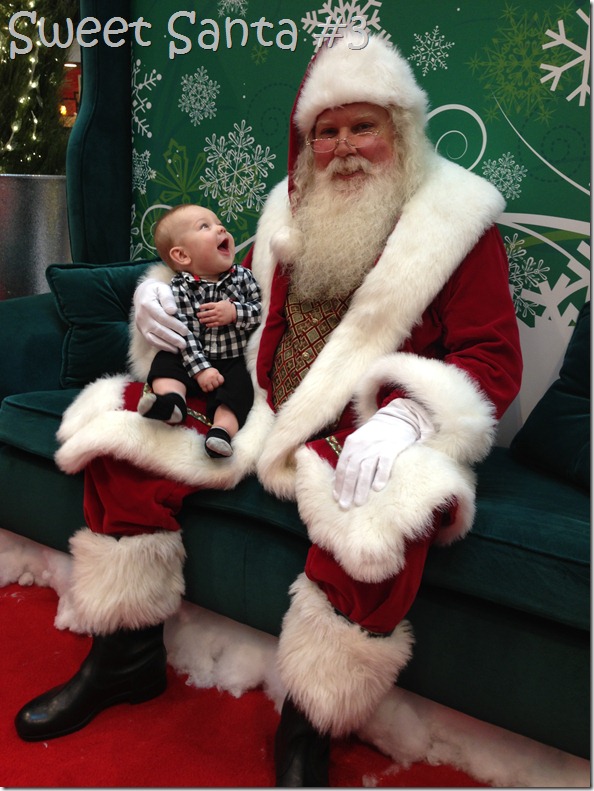 And last, but certainly not least, a big boy named Michael.  I just loved the expression of joy and belief on Michael’s face.  Beth wrote, “This is my Michael with an awesomely realistic Santa!” 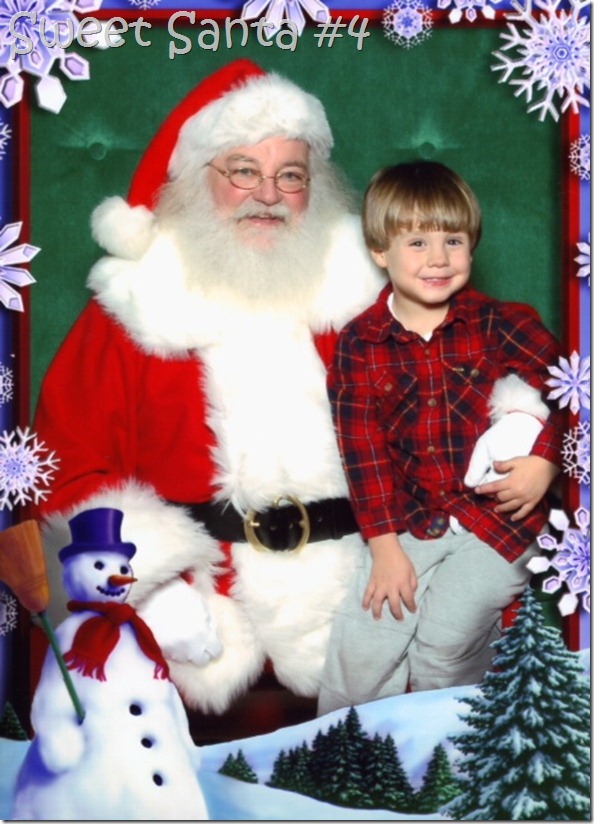 Now it’s your turn to choose the winner… Number 1, 2, 3 or 4?  Cast your vote in the comments section; I’ll tally up the votes and select the winning picture on Friday.