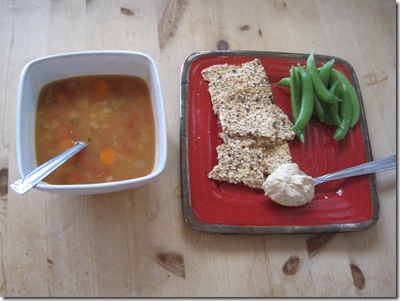 I had veggie soup: 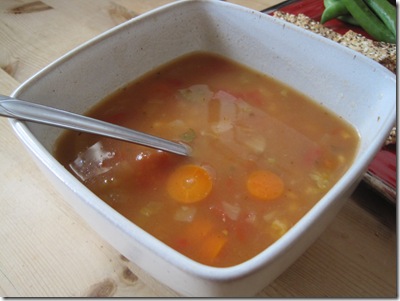 And crackers, hummus, and sugar snap peas (which were really plump and delicious!): 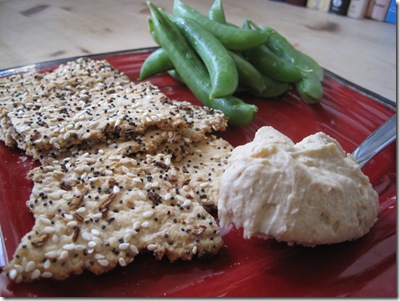 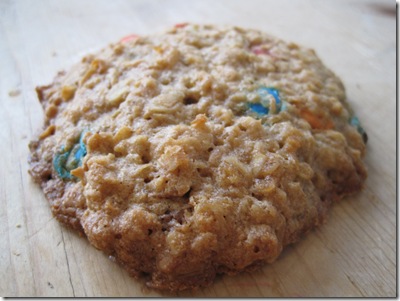 Meghann, Megan, and I had a conversation about feeling guilty for eating meat.  Now, Meghann and Megan are not vegetarians (but they don’t eat meat-focused diets) and I’m obviously a vegetarian, so there were some interesting opinions to be discussed.

I’ve been 100% vegetarian for about five months now, and honestly, it’s been great.  I actually LIKE having the vegetarian label because I feel like it makes my decision more "real" and a stronger commitment.  But, I had my first so-called "moment of weakness" last weekend.  During the family BBQ, I could smell the scallops on the grill and it triggered something inside me.  For about 20 seconds, I really debated eating a scallop.  I think this is something most vegetarians don’t feel comfortable discussing, but I believe it’s fairly common to at least  "crave" meat once or twice.  I ate meat almost everyday until I was 24 and have been conditioned to like it.  It’s not surprising that something would be triggered deep inside me by the smell of cooking meat.

What I’m saying is that I can understand why some people feel conflicted about eating meat.  It tastes good, but it doesn’t necessary FEEL good.

There are several reasons why I don’t eat meat: the treatment of animals, the environmental impact of factory farms, the treatment of farm workers, and my health.  That doesn’t mean I think you’re immoral or evil if you eat meat!   If you WANT to eat meat, please don’t feel guilty for living your life the way you want to live it.  No one is here to tell you what to do or how to feel.  On the other hand, if you feel conflicted about eating meat, listen to those emotions and honor them. You can honor those emotions by going 100% vegetarian or becoming a flexitarian who only eats meat occasionally.  Either way, you’re doing the animals and the environment a favor.

By the way, this thought process set off an interesting round of comments on Twitter about what qualifies you as a vegetarian or not.  Now, I know people consider labels to be kind of pointless, but they do mean something to a lot of people (including myself because, as I wrote above, it helps me maintain my commitment to the vegetarian lifestyle to be labeled as such).  But I’m going to go ahead and argue that if you eat fish, you’re not a vegetarian — you’re a pescetarian.

This Twitter discussion brought up the face rule, which I think a lot of vegetarian subscribe to — i.e. if it has a face, you won’t eat it.  I think the face rule is really funny!  FYI — scallops have eyes and thus have faces.  🙂

Do you label yourself as a meat-eater, flexitarian, pescetarian, vegetarian, or vegan?  Do you believe there is something to be said for labels, or is it just silly to label yourself one way or the other?

In the end, all that matters is that you make your own decisions about what is right and healthy for YOU!