"I was at the Philly Airport on July 6th on my way home to Oakland, Ca and found a post it in my bathroom stall with a quote from Eleanor Roosevelt and this website address. Thank you… who ever put it there!"

And a few hours after that post went up, I received this e-mail from Kimberly:

"THAT WAS ME!! I was on my way home from a weekend at my parents’ house, celebrating my first time in three years being there without any eating-disordered behaviors and generally feeling confident in my recovery, so I wanted to share that hope with the world. The quote was "The future belongs to those who believe in the beauty of their dreams."

Erica posted this note in a bathroom: 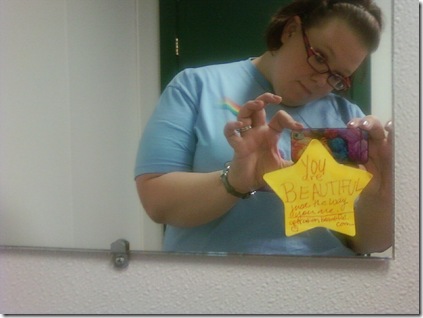 She wrote, "I put this up in the window at a very busy local diner. After we sat down to eat, a group of four girls ranging from ages 7-12 or so came out of the bathroom — all together, as girls do — with huge smiles on their faces. I heard them saying about how cool it was that there was a star on the mirror saying that they were beautiful just the way they are. One of the girls, probably the oldest, was beautiful – a huge grin, long blonde hair, and a bit chubby. She had the biggest grin of all. They were all telling their dad about the Post It and saying how cool it was. I could tell it totally made their day.  I reached into my purse and wrote another one on the star paper. As they were walking out, I said, "Hey girls!" The blonde girl looked at me and I handed her the star. She read it and got the HUGEST grin from ear to ear. She whispered to the other girls as they walked out and they all got so excited.   She walked past the window outside, turned around, stopped, looked right at me, and smiled an appreciative smile while she waved. I knew she was saying "Thank you".  It absolutely touched me beyond words."

To read more notes, go to Operation Beautiful.  If you want to participate, write a note, take a picture, and email it to me at seebriderun@gmail.com!