For lunch, I had a PB sammie with a carrot and cherries. 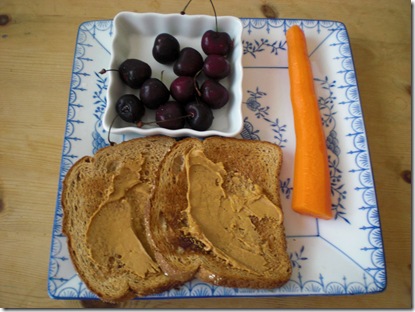 PB sammie was the only food that seemed interesting to me at lunch.  I’m dealing with some yucky tummy trouble and as a result, NOTHING looks appetizing.  Ugh! 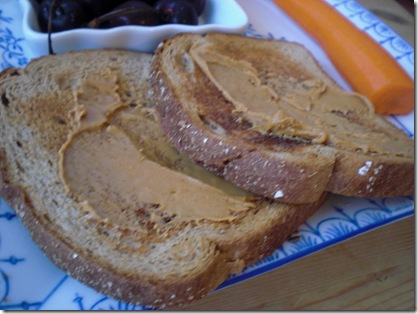 It seems one of the new things in runner blogland is proclaiming our right to run in sports bras only.  It’s hot as hell out there this summer! I have NEVER run in just a sports bra because I was too shy.  But just like Megan and Kelly, I’ve decided to say SCREW IT and reclaim my sports bra rights. I don’t need a magazine-worthy 6-pack to feel good!

I met up with Megan around 2:30 for a run at a nearby park.  When we got there, we were pretty surprised to see the gates were STILL locked — the park was suppose to open at 6 AM! 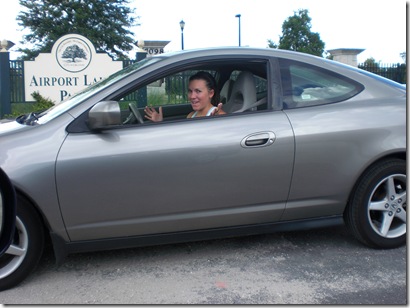 (That’s Megan saying "What the hell!?")  So, we decided to jump the fence and run in the park anyway.

It was sooo nice to run without a shirt on!  Sports bras only rule!  Unfortunately, it started to rain and thunder so we called it a day a little early.

I’ve enjoyed reading about your recent successes!  All you ladies (and gents) rock!

Amy wrote me this morning to share her success story and it’s so motivating that I want to share it with you guys, too! 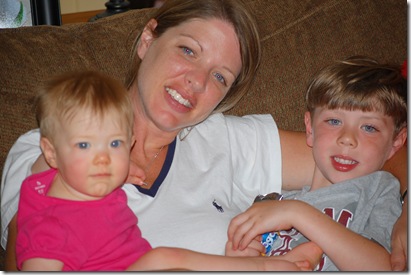 Amy said, "I saw the reader success posted today and wanted to share my similar success. I have 2 kids, a 5 year old and an 8 month old. I also have a twin sister and while I was pregnant last, she lost a huge amount of weight, which completely inspired me to do after the birth of my daughter. Twins can be very competitive! I have never been athletic but would work out on the elliptical trainer and call it a day. Now I am running 5 miles on the weekend and during the week I swim about 30 laps or work out to my P90X dvd’s. I have done 2 5k’s and now working on a “mini” triathlon in September. I am very nervous about this but figure if I can just finish, that is good enough!"  She’s lost 20 pounds since October!  Rock on, Amy!

If you’re following me on Twitter, you might have read about a little writing endeavor of mine!  This New Year’s Eve, I resolved to try to write a book, which is something I’ve always dreamed of doing.  Well, guess what?  I don’t have my book written YET, but I have the idea AND I have an agent (yes, a real-life literary agent).  How cool is that?

If you dream it, you can achieve it!