Egg in the Hole

Good morning! I was feeling creative this morning and made my British husband a traditional English breakfast:  Egg in the Hole! 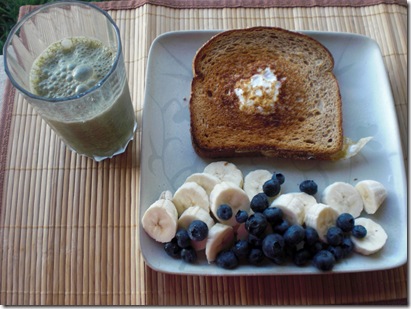 Egg in the Hole is basically an over-easy egg INSIDE a piece of toast.  To make it, cut out a little hole in the center of the bread, put it on the griddle, and then drop the egg inside the hole. 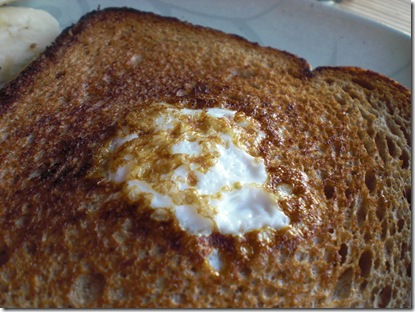 Flip carefully and fry the other side!  It ends up as a yummy, drippy egg already soaking into the bread – SO GOOD! 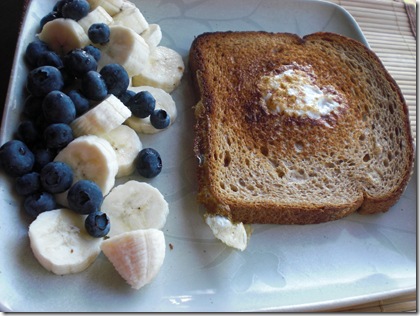 Plus, banana and blueberries, and a glass of Amazing Grass in unsweet almond breeze.

A big THANK YOU to Jessica, who donated to my Team in Training efforts.  I appreciate it!

Since a few people have been asking, my friend who has cancer (I’m running the Disney marathon in her honor through Team in Training) is starting chemotherapy next week.  She’ll go through 3 months of chemo, have a bone marrow transplant, and then she’ll be in the hospital for 3 months.  She loves that I’ve received so much support on Team in Training and says it brightens her day! So THANK YOU to everyone who has contributed so far! 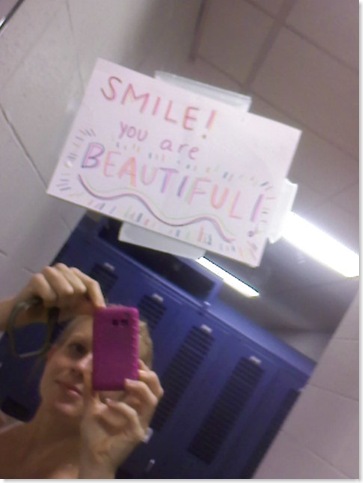 Hilary found it in women’s locker room in the White Building at Penn State University on July 1st.  She said, "I found this note in my gym locker room a few weeks ago and I’ve been checking the Operation Beautiful website everyday to see if I could find it!  I would just like to say right before I found the note I was thinking about how my muffin top was probably showing because I bought shorts that were a size too small and then I saw the note and I couldn’t help but smile and I immediately laughed off the thought of my muffin top because it really didn’t matter!"  Did you post this note? Hilary would love to know who did!

UPDATE!  Lorie was the one who posted the note!  She sent me a message this morning that read: "I was checking up on blogs this morning and saw the note and picture you posted from Hilary, who was wondering who posted an OB pic at Penn State University a few weeks ago.  Well, when I saw that picture that she took of the OB message, I realized that it looked incredibly familiar–because, it was me! I am a student and go to that gym almost everyday, and I realized what a perfect place it would be to post a message.  I didn’t have my camera on me, but I was so excited that days later, the message was still up!  I never thought that a blog reader would be the one to notice the message–and then take a picture of it too!–but I am so glad that the words did impact her, and only hope that it has done the same for other girls passing by that mirror.  I know that OB is meant to impact others, but knowing that this message meant something to Hilary is a huge boost in my own confidence.  It makes me realize that sometimes the simplest of gestures can make the greatest of impacts."

Check out Operation Beautiful for another story of a"found note."  Plus, see what a man living in Los Angeles thinks of the mission!