Eating Food That’s Better For You, Organic Or Not

Good morning!  I could hear the rain pitter-pattering against my window this morning, which made it sooo hard to get up.  Luckily, I had set my alarm for the latest time possible with the full intention to Shred after work.  Does anyone else find it ironic that I need MORE sleep after a vacation?

To say that I was looking forward to making my own breakfast this morning would be a totally understatement — I dreamt about OATMEAL! 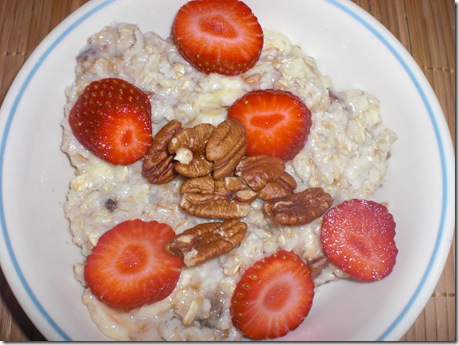 My oatmeal contained a surprise ingredient: Nature’s Candy! (AKA:  Dates!) 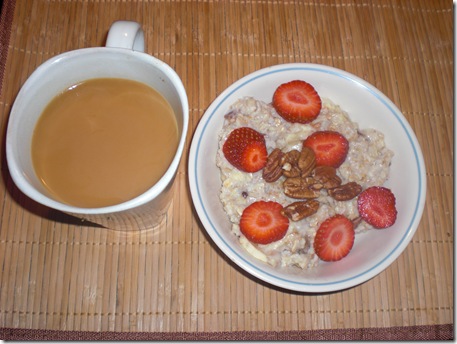 Home-brewed coffee is awesome.  I don’t miss that hotel sludge at all!

Eating Food That’s Better For You, Organic Or Not

This article on NYT really peaked my interest.  According to the author, Americans are obsessed with eating organic because we’ve been drilled to believe that is what’s "good" for us.  But, at the same time, we’re eating tons of other crappy foods.

While eating organic is important, "the truth is that most Americans eat so badly — we get 7 percent of our calories from soft drinks, more than we do from vegetables; the top food group by caloric intake is “sweets”; and one-third of nation’s adults are now obese — that the organic question is a secondary one. It’s not unimportant, but it’s not the primary issue in the way Americans eat."

Michael Pollan, who wrote one of my favorite eating books ("In Defense of Food") is quoted as saying: "There’s plenty of evidence that both a person’s health — as well as the environment’s — will improve with a simple shift in eating habits away from animal products and highly processed foods to plant products and what might be called “real food.”"

Just because food is organic doesn’t mean it leaves a smaller carbon foodprint or is produced locally — it fact, much of the allure of organic foods, the article argues, is merely a marketing campaign by our government and big business.  In fact, major corporations now are responsible for at least 25 percent of all organic manufacturing and marketing.

The article ends by stating, "But when Americans have had their fill of “value-added” and overprocessed food, perhaps they can begin producing and consuming more food that treats animals and the land as if they mattered. Some of that food will be organic, and hooray for that. Meanwhile, they should remember that the word [organic] is not synonymous with “safe,” “healthy,” “fair” or even necessarily “good.”"

I agree with Pollan’s argument that we should "Eat food. Not too much. Mostly plants."  I also believe that organic vs. non-organic is probably a secondary issue for most Americans.  And lastly, I found the data and conclusions about organic food as a ‘marketing machine’ to be very interesting — I guess I never thought to look at it like that.  But knowing our government, it makes perfect sense!  What do you think of this article?

Next post: I’ve Got a Hankering For Edward Cullen