French Bread and I Have a Special Understanding

Good afternoon! I spent three hours in the social security office and the bank trying to get all my records changed per my new last name! It was a headache, but at least a lot of it is OVER with!  🙂

I was seriously starvvvvvvvving by the time I left, but I needed to stop at the grocery store first.  I grabbed a loaf of French bread… and then it was all over! 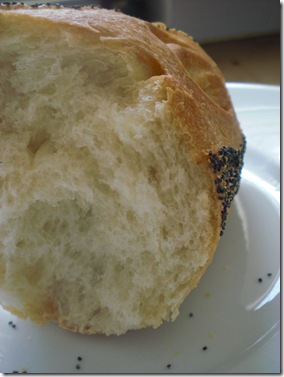 If there is a loaf of French bread in the car, I cannot get to the house without opening the package and chowing down!  It is physically impossible. :)  So I ate about 1.5 serving in the car.

I came home and heated up a can of Wolfgang Puck Roasted Red Pepper and Tomato Soup. 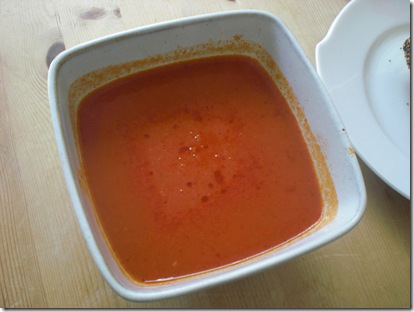 Plus some more bread for dipping… 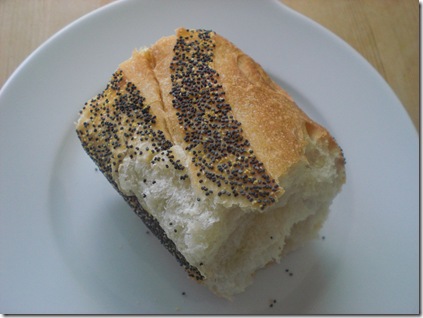 Mmmm. Totally worth it. I love carbohydrates.

Hopefully this bread will serve as excellent fuel for the 5.0 or 6.0 miler I am about to embark on! :)  First, I need to clean the house — it’s a disaster.

The Husband forwarded me this article from The Wall Street Journal, and I thought you all would be interested!  Here are the highlights:

Many people tend to think of breakthroughs in medicine as a new drug, laser or high-tech surgical procedure. They often have a hard time believing that the simple choices that we make in our lifestyle — what we eat, how we respond to stress, whether or not we smoke cigarettes, how much exercise we get, and the quality of our relationships and social support — can be as powerful as drugs and surgery. But they often are. And in many instances, they’re even more powerful.

These studies often used high-tech, state-of-the-art measures to prove the power of simple, low-tech, and low-cost interventions. Integrative medicine approaches such as plant-based diets, yoga, meditation and psychosocial support may stop or even reverse the progression of coronary heart disease, diabetes, hypertension, prostate cancer, obesity, hypercholesterolemia and other chronic conditions.

… Our "health-care system" is primarily a disease-care system. Last year, $2.1 trillion was spent in the U.S. on medical care, or 16.5% of the gross national product. Of these trillions, 95 cents of every dollar was spent to treat disease after it had already occurred. At least 75% of these costs were spent on treating chronic diseases, such as heart disease and diabetes, that are preventable or even reversible.

…A randomized controlled trial published in April 2007 in The New England Journal of Medicine found that angioplasties and stents do not prolong life or even prevent heart attacks in stable patients (i.e., 95% of those who receive them). Coronary bypass surgery prolongs life in less than 3% of patients who receive it. So, Medicare and other insurers and individuals pay billions for surgical procedures like angioplasty and bypass surgery that are usually dangerous, invasive, expensive and largely ineffective. Yet they pay very little — if any money at all — for integrative medicine approaches that have been proven to reverse and prevent most chronic diseases that account for at least 75% of health-care costs. The INTERHEART study, published in September 2004 in The Lancet, followed 30,000 men and women on six continents and found that changing lifestyle could prevent at least 90% of all heart disease.

That bears repeating: The disease that accounts for more premature deaths and costs Americans more than any other illness is almost completely preventable simply by changing diet and lifestyle. And the same lifestyle changes that can prevent or even reverse heart disease also help prevent or reverse many other chronic diseases as well. Chronic pain is one of the major sources of worker’s compensation claims costs, yet studies show that it is often reversible when treated with  acupuncture and Qi Gong.  Herbs usually have far fewer side effects than pharmaceuticals.

It’s time to move past the debate of alternative medicine versus traditional medicine, and to focus on what works, what doesn’t, for whom, and under which circumstances.