Our honeymoon continues to be totally fantastic!!  The chilly weather has departed, and we’ve got tons of sunshine. 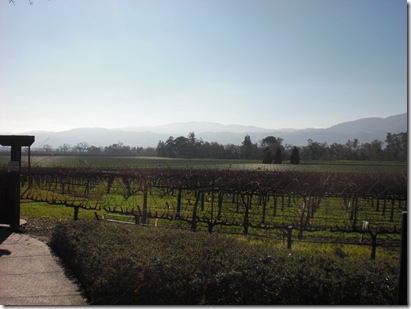 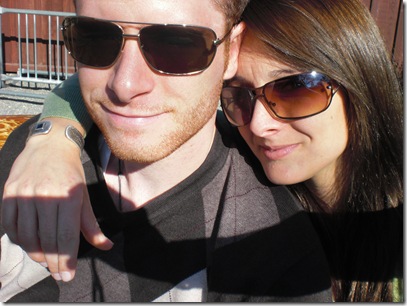 I started my day with a 4.5 mile run along the Napa River.  Its the longest run I’ve done in about a week and a half, and it felt SO good to sweat out some of the booze.  Honestly, I know I can’t possibly be burning off all the calories I am consuming/drinking (and it’s starting to show), but some exercise is better than no exercise on vacay!

We settled down for the complimentary breakfast, which is pretty good.  I’ve been loading up on breakfast to minimize drunkenness at the tastings.  I’ve been munching on fruit + granola…. 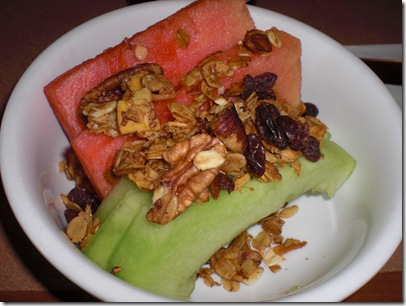 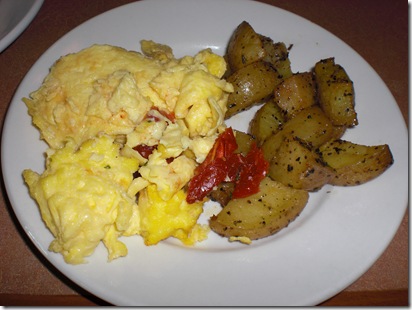 And mini croissants (ditto re: the plate)! 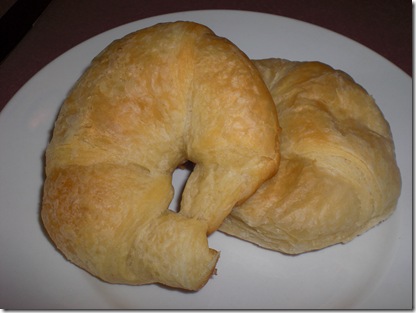 We got in Victor the Mercedes Benz and just drove around the Valley, hitting up wineries that peaked our interest. 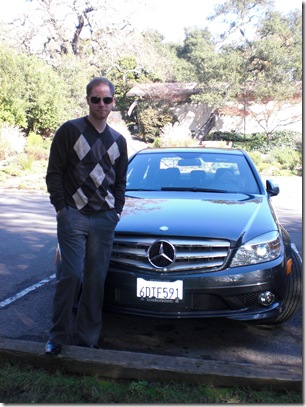 First stop:  Stag’s Leap, where we discovered you can split a tasting between two people. Thus — we started to save money and sobriety! 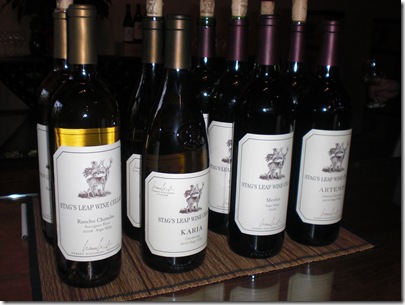 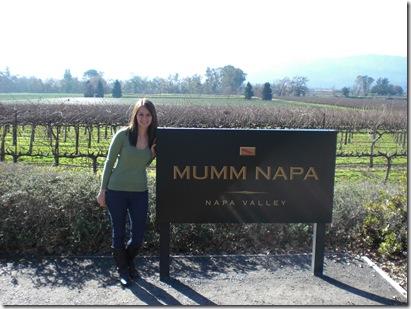 Mumm Napa was my favorite winery so far! I love champagne, and Mumm Napa has a free 45-minute tour during which you get to see the production area.  I learned a lot! 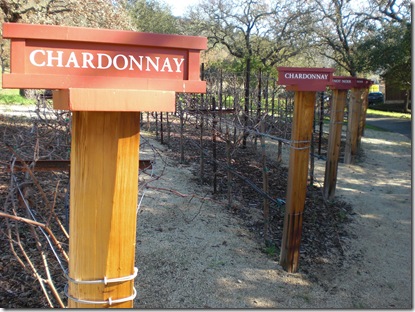 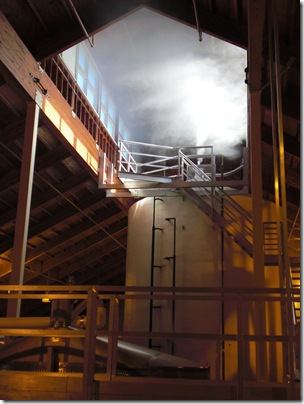 We ate deli sandwiches and sat on the Mumm Napa patio, soaking in the lovely view. 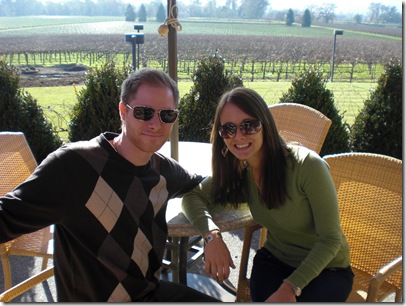 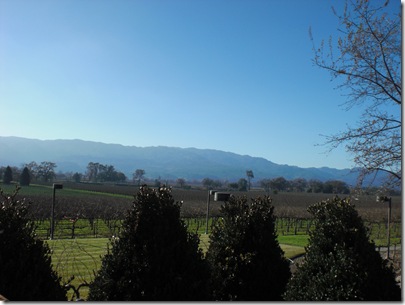 We split a tasting of champagne, including some sparkling reds! 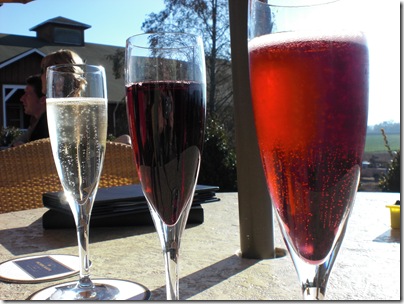 We ended up buying one of the sparkling whites. We’ve bought about five bottles so far. 🙂 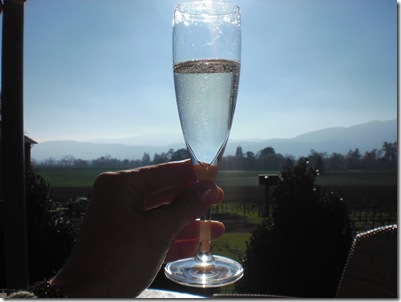 By this point, I was pretty drunk, so Husband got the keys to Victor. :)  Gotta be safe! 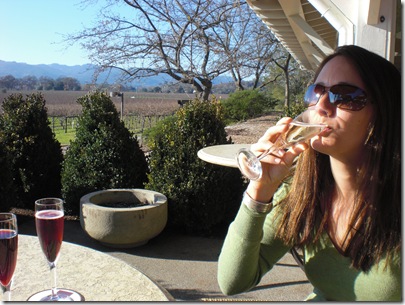 We drove around the valley and walked into several wineries to just look around (but we didn’t do tastings)….

We stopped at Beringer Vineyards. 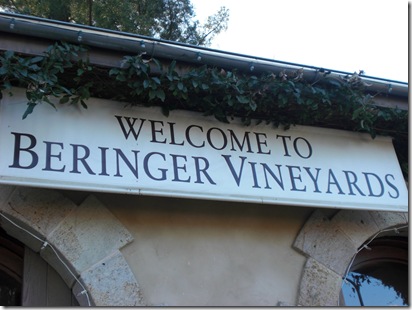 Beringer has been in continuous production longer than any other vineyard in Napa (since the 1890s, even during Prohibition — they made dried grapes).  There’s a 100+ year-old estate home on site. 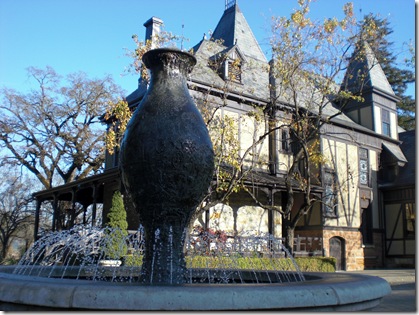 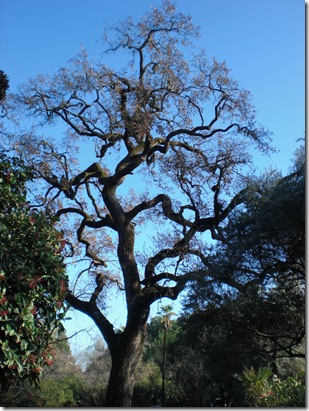 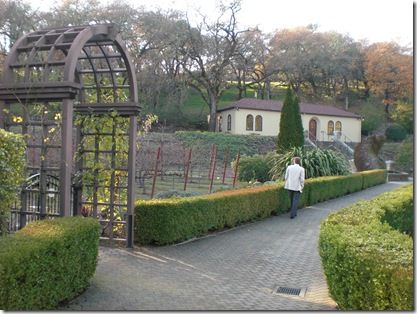 Then we drove to Opus One and Robert Mondavi.  Opus One was closed, but the Mondavi vineyard was aesthetically amazing! 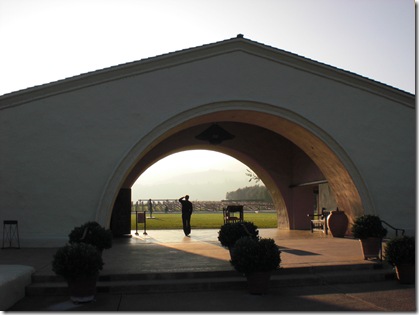 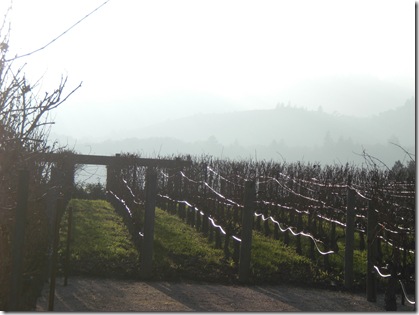 Our last vineyard of the day (and of the honeymoon) was Swanson.  We definitely saved the best for last!  Their tastings are done in a lovely hot pink French-style salon. 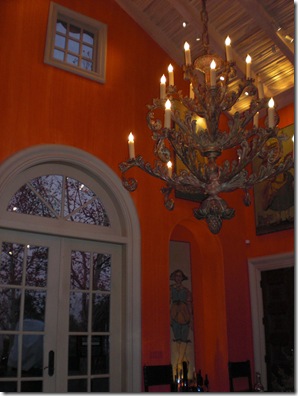 The Swanson wines were a-ma-zing and the tasting includes cheese, crackers, and chocolate bonbons. 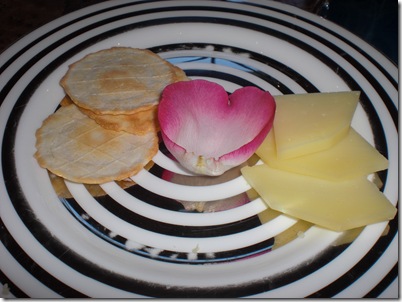 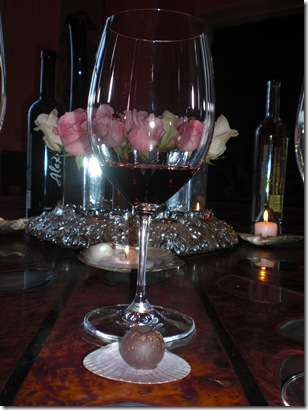 Swanson had a really funky vibe and awesome decor.  I highly recommend it.

Dinner was at the newest restaurant in Yountville, a place called Bottega. 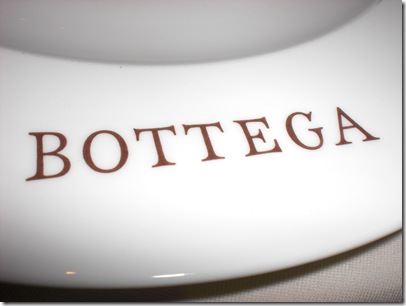 Bottega is the newest restaurant from Chef Michael Chiarello (yes, of the Food Network).  I even saw him instructing lower chefs in the open kitchen! It was awesome!

We started off with yummy French bread.  It was served directly on the tablecloth. 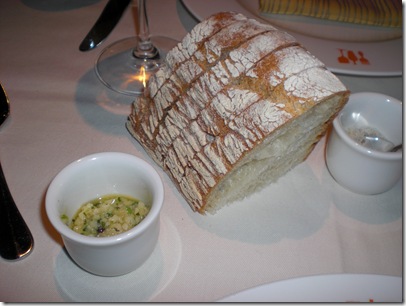 And my entree was Cornish Chicken and stuffing.  It was a very large portion for a reasonable price — especially considering it was a famous Chef’s newest restaurant!  And it was good! 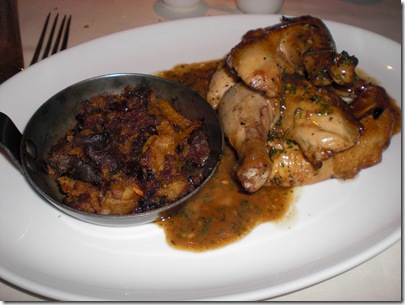 We decided to split a side of red potatoes… 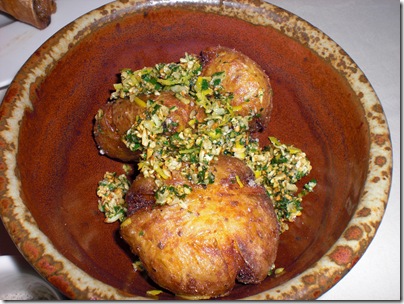 We made sure to save room for dessert…. 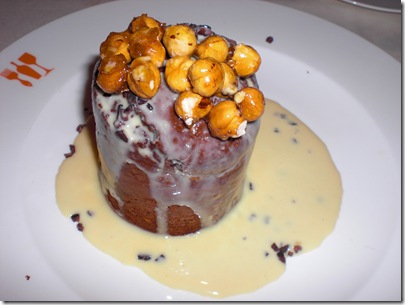 The Chocolate-Almond Molten Chocolate cake with hazelnut creme anglaise and caramelized hazelnuts was TO DIE FOR!

Time for me to hit the hay! We have another exciting and full day planned for Day 4 of the honeymoon…. see you soon!

What’s the best place you’ve ever been to for food?  I think Napa is FOODIE HEAVEN!!!