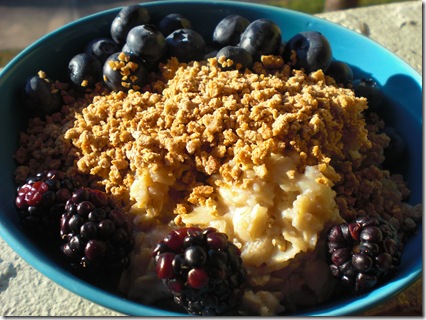 Which went perfect with the BLUE sky today! 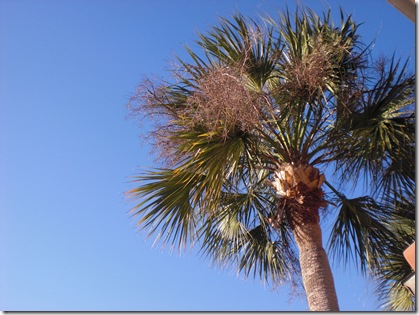 Its actually chilly here (by Florida standards), but the sky is so crisp and clear.  It’s lovely.

Wish I was running, not working!

My oatmeal was delish…. I love fresh fruit added to oatmeal.  It gives it so much more flavor and natural sweetness. 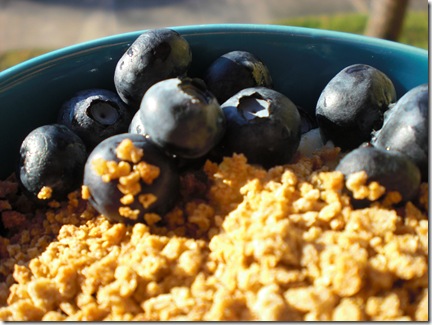 SO many of you write to me and tell me, "We have the same knee trouble!"  It’s amazing how many young woman have crappy knees.

The Running Doc on Runner’s World was asked a knee-related question this week, and I wanted to share it with you!

My doctor says I have runner’s knee, but my therapist says it is patellar tendonitis. Is there a difference? She has done strengthening and electronic galvonic stimulation (EGS) on my patellar tendon until it doesn’t hurt and then I go back to running and I get pain again. This has happened on and off for two years. My doctor says I should stop running. Do you have another solution? – Tracy W., Seattle

The Running Doctor says:  Tracy, I am so happy you wrote! You don’t need to stop running; you need to find a doctor who understands running injuries!

The patellar tendon is a tendon that comes from the four quad muscles of the thigh. It splits around the kneecap (patella) and forms a strong tendon again and inserts into the tibia. Sometimes it gets inflamed (tendonitis) due to its not pulling in a straight line (again biomechanical: overpronators at the bottom cause the mis-pulling above).  Pain from running around the knee has been called runner’s knee including chondromalacia (roughing up of kneecap cartilage), ITB syndrome and Patellar tendonitis. I usually reserve the term runner’s knee for chondromalacia and call the others by their names; others use the "runner’s knee" for all, or even just call it anterior knee syndrome. All are equally correct. What counts is the way it is treated!

Yes, rest and strengthening along with EGS and physical therapy will get rid of the pain but not correcting the overpronation at the bottom will cause the pain to return. A full length flexible orthotic is what I think you are missing toward sustained pain free running. It doesn’t sound like you had that added to the equation for you.

As you all know, I wear Knee Sleeves, which really seem to help me.  If you are having trouble with your knees, I would recommend them (and apparently, so does the Running Doctor)!

What body part are you most prone to injuring?  Do you have any advice or tips for people who might have the same issue?