on August 1, 2008
in All Posts
what a morning! i woke up intending to go on a run, but i had a headache. when i run with a headache, it seems like my brain is smashing against my skull. i decided to e-mail my boss and tell her i’d be late while i tried to sleep it off.
THEN, i decided exercise was the only thing that would make my headache go away, and since it was already 8:30 AM and a run was out of the question (it hits 90 by 7:30 here in the summer), i thought i’d go on a ride. i strapped on my heart rate monitor, helmet, gloves, and everything, but then i couldn’t get my tires to inflate! my pump has been acting up ever since my dualthon, so i decided fate just wanted me to stay home and start working.
at least i tried! 🙂 it may be better that i didn’t go on a run today as my 10k is tomorrow morning! yayyy!
breakfast was a coffee, a cup of skim milk, and two pieces of WW toast with 1.5 tbsp organic PB and sliced banana. it was delicious. 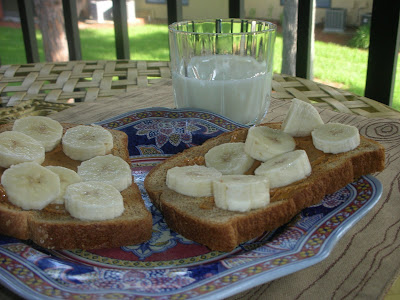 interesting food fact of the day: did you know that USDA figures show a serious decline in the nutrient content of the 43 crops it has tracked since the 1950s? in one recent analysis, vitamin c declined by 20%, iron by 15%, riboflavin by 38%, and calcium by 16%. to put this in concrete terms, you now have to eat three apples to get the same amount of iron you would have gotten from a 1940s apple. this is due to overfarming, poor soil conditions, and the use of pesticides. (from “in defense of food” by michael pollan)