on August 28, 2008
in All Posts
This is strange–I sat down at my computer to begin work, and I just felt terribly ill. My head hurts and there’s a strangle rumbling in my tummy. 🙁 I tried to work for an hour and once I realized I had only read one e-mail and was still trying to understand it… I called in sick. As I work from home, I try to be very respectful of my company’s time and sometimes it’s just better to take the day off. So here I am, on the couch on a Thursday afternoon!
Today reminds me of my mother, because she would always let me take two “mental health days, no questions asked” each 9-week semester in high school. She said she understood some days you just aren’t fit for work, even if you aren’t desperately physical ill. What a mom! 🙂
Mental Health Soup – Polenta Sweet Corn Soup 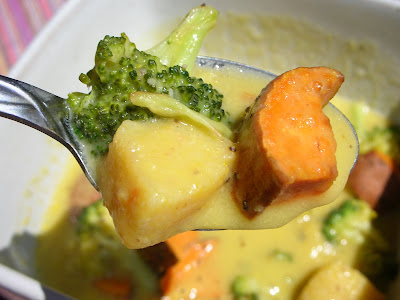 I was craving soup for lunch even though it’s about 100 degrees outside… I used Imagine Organic Creamy Sweet Corn Soup as a base. First, I roasted 1 serving of broc, a half a sweet potato, and one serving of polenta, all chopped into very small pieces. I roasted the veggies and polenta for 20 minutes at 350. I heated up the soup, combined in a small pot, and let simmer for 3 more minutes…. viola!–Polenta Sweet Corn Soup! 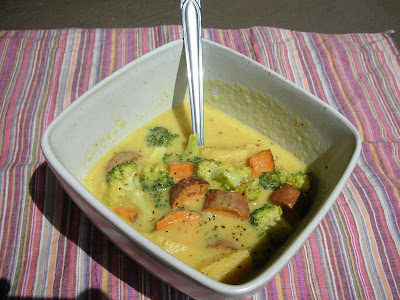 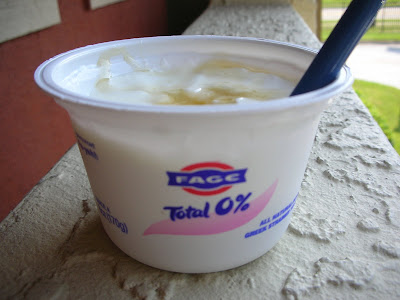 Now, I’m a big fan of plain, non fat yogurt, but I know a lot of people mix Fage and honey, so I tried that. OHMIGOD. So delicious and creamy. FAR superior of regular yogurt! However… at $1.99, I can’t afford it. Can you get it cheaper??
Runners Live Longer — Woo Hoo!

I read this awesome article the other day. Here are the highlights:

“People who want to live a long and healthy life might want to take up running…. A study published on Monday shows middle-aged members of a runner’s club were half as likely to die over a 20-year period as people who did not run. Running reduced the risk not only of heart disease, but of cancer and neurological diseases such as Alzheimer’s, researchers at Stanford University in California found. “At 19 years, 15 percent of runners had died compared with 34 percent of controls,” Dr. Eliza Chakravarty and colleagues wrote in the Archives of Internal Medicine.

The team surveyed 284 members of a nationwide running club and 156 similar, healthy people as controls. They all came from the university’s faculty and staff and had similar social and economic backgrounds, and all were 50 or older. Starting in 1984, each volunteer filled out an annual survey on exercise frequency, weight and disability for eight activities — rising, dressing and grooming, hygiene, eating, walking, reach, hand grip and routine physical activities.

Most of the volunteers did some exercise, but runners exercised as much as 200 minutes a week, compared to 20 minutes for the non-runners.

People who took up exercise when they were older also improved their health, he said. The study also showed that people cannot use the risk of injury as an excuse not to run — the runners had fewer injuries of all kinds, including to their knees.”