dinner in a box 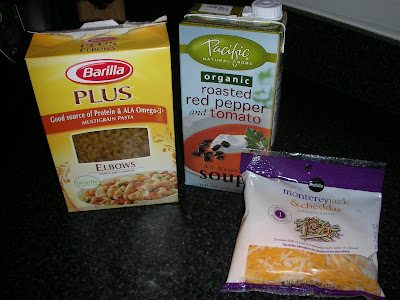 Although I try to avoid most pacakaged foods (God only knows what’s in them!), I finally found a few I’m comfortable eating and serving — and these are delicious! But before dinner, I went on my run….
Workout consisted of a 33 minute run (about 3.2 miles) to and around a nearby park. On the way home, I did three sets of lunges (two forward and one side to side). Lunges tend to make my knees ache so I rarely do them. I didn’t wear my heart rate monitor, but I usually burn about 275 calories on a run like this.
I ran a different route for a change of scenery, but this new route means I have to run along a 6-lane highway for about .25 mile. I read an article called “Effects of Air Pollution” in Men’s Health (which is a much better magazine than Women’s Health, by the way).
Here’s the highlights:
A sedentary person inhales approximately 15,000 liters of air per day, or 6 to 10 liters per minute. During heavy aerobic exercise, however, you draw in 60 to 150 liters per minute, delivering oxygen throughout 600 to 900 square feet of surface area in the lungs.

“That means the exerciser breathes in 10 to 15 times more pollution than the sedentary person, and he’s sucking it deeper into his lungs,” says Rob McConnell, M.D., a researcher in the department of preventive medicine at the University of Southern California medical school. “In fact, just by stepping out the door, you could be exposed to five times the ozone you’d inhale if you stayed inside. So if you’re outdoors and exercising . . . well, do the math.”

….Researchers studied 30 healthy men cycling on exercise bikes while exposed to diluted diesel exhaust. After 1 hour’s exposure to the fumes, the cyclists developed constricted blood vessels and showed a reduction in tPA, an enzyme that breaks down blood clots in the heart. In another study, 17 competitive cyclists were exposed to varying levels of ozone while exercising; their endurance decreased by approximately 30 percent, and their lung function by 22 percent.
Basically, I feel pretty guilty about running alongside a busy roadway, but to be honest–there’s not much choice in my part of Orlando, Florida. Either I can drive to the gym (3 miles) and run on the treadmill or run outside. Running outside is more pleasurable and it saves on gas, so toxic fumes be damned!

For accountability’s sake, before the run I grabbed two pieces of bread out of the fridge (in Florida, you’ve got to keep bread cold!) and slathered one with 1 tbsp. of PB. You know you needed extra fuel before a workout if it doesn’t make you feel “heavy” during cardio! 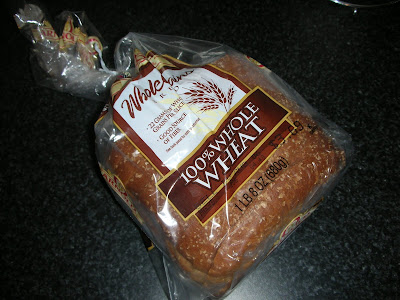 Future Husband is a little sick, so I made him a yummy warm meal of tomato soup, mac n cheese, and broc. The soup is a Pacific Brand Natural Foods Organic Red Pepper and Tomato. It was zesty and complex, and it was a great compliment to my homemade mac n cheese (used about 3/4 cup of cheese, 1/4 cup of skim milk, Barilla Plus Elbow Pasta, and S&P to taste for 3 servings… FH gets two). Together, the plain pasta and soup had over 15 g of protein! I had a very small portion of mac n cheese because I think I overdid it on the carbs today. 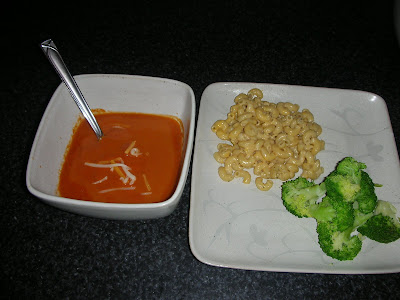 Good night, sleep tight! Future Husband and I are watching Indecent Proposal and arguing over who is right – Demi Moore or Woody Harrelson. I think its both their fault and FH thinks its Demi’s. 🙂
{ 0 comments }