Good morning!  After I posted last night, I decided that there was NO way I was "wasting" a whole 4 hours of wedding planning with nothing to show.

I kept chugging along and (1) picked out the favor (we’re doing candy) and (2) wrote the ceremony!  More details at the end….

But first, BREAKFAST!  Yesterday’s Coconutty Oatmeal was such a success that I incorporated coconut into today’s breakfast as well. 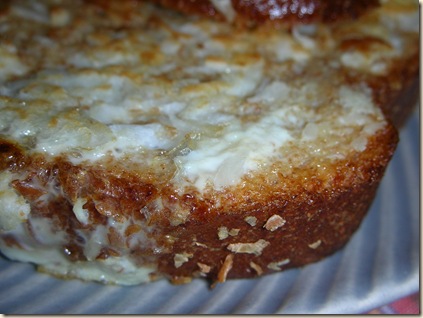 I added three tablespoons of coconut to 3 beaten egg whites, and dredged two pieces of WW bread into the mix.  Then, onto the griddle these babies went, and viola – Coconut French Toast! 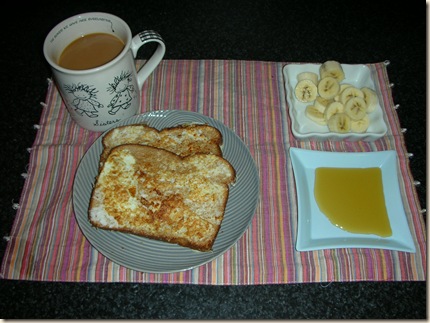 The coconut came through more as a texture to the French toast than a flavor addition, but it was still divine!  It gave the toast a nice chew. 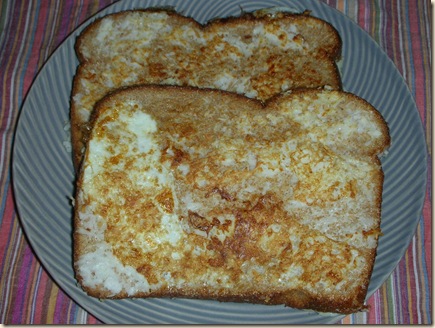 On the side, I had my usual sliced banana + maple syrup. 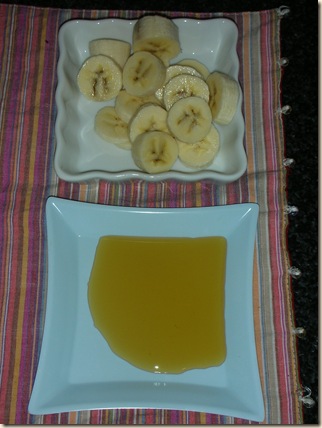 And last, but certainly not least, a nice, warm cup of coffee in my inspirational sisterhood mug (I don’t even have a sister)… 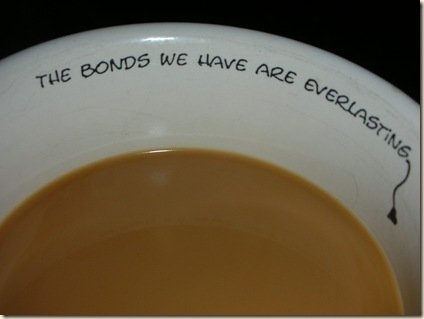 Wedding Details – Who Says What, When!

Future Husband and I are spiritual, but not religious, people.  Future Husband’s stepfather has served as his spiritual and professional mentor ever since we was 16 and moved to America.  My future father-in-law (FFIL) is very intelligent and runs a holistic clinic that Future Husband will one day take over.  Since FFIL is also an ordained minister, we asked if he would perform our civil ceremony, and he agreed–which just excites me so much!

So… that means that we have to write the ceremony ourselves, from the opening line to the ring exchange! We’ve asked two of our close family members to give "readings,"" and FFIL will also do what he does best and say something inspirational.

We both agreed that we didn’t want to surprise each other with self-written vows.  I just don’t think I could say something so intimate in front of 100 people without bawling my eyes out! Future Husband agrees!  So we’re going to a do a "repeat after me"-style of vows with all the traditionally favorite lines.

Here’s what we’re going to try to say without crying hysterically:   "I, Future Husband, take you, Caitlin, to be my wife. In the presence of God, our family and friends, I offer you my solemn vow to be your faithful husband and friend from this day forward for better or worse, for richer or poorer, in sickness and in health to love and to cherish, from this day forward until death do us part."  (I like the part about being a husband and a friend).

Did any of you married folk write your own unique vows for the ceremony and surprise your spouse on your wedding day?  Could you say what you wanted to without getting all choked up?

What’s your favorite part of the ceremony?  I like watching the groom as the bride walks down the aisle, and I love the part where they exchange rings — someone’s hands are always shaking in a cute, nervous way! 🙂

Enough of the mushy stuff… gotta go to work!