Triathlon relays are so much fun! 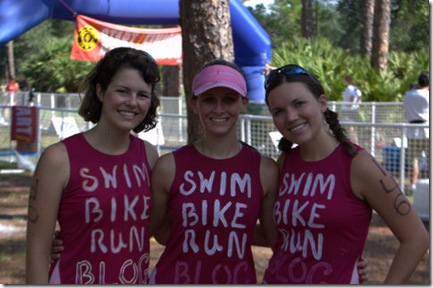 Race morning started off like any other race day — alarm went off and an ungodly hour and I stumbled to the kitchen for coffee and oatmeal. I had banana oatmeal with coconut and blueberries. Mmm! I was out the door before the sun came up and arrived at Moss Park as Megan was setting up her bike. 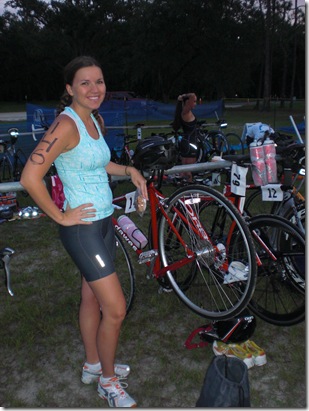 Megan, Ryan, and I walked to the beach so Ryan could listen to the swim rules. The sun was just beginning to rise and it looked so beautiful out. 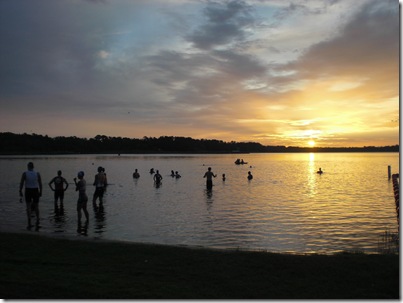 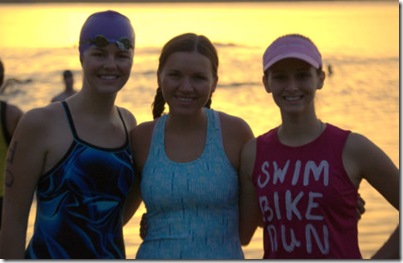 Ryan looked pretty calm for a woman who was about to swim 1.5K in a muddy lake! She swam in college so I guess she felt prepared. 🙂 Since the men start before the woman, we chatted while we waited for her wave to start: 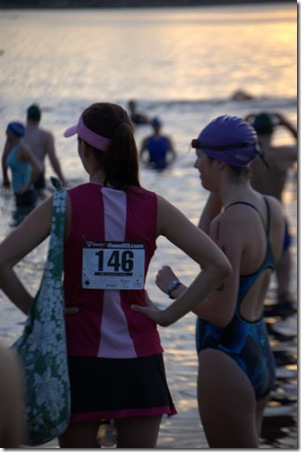 And… then the gun went off and Ryan swam off like a mad woman! 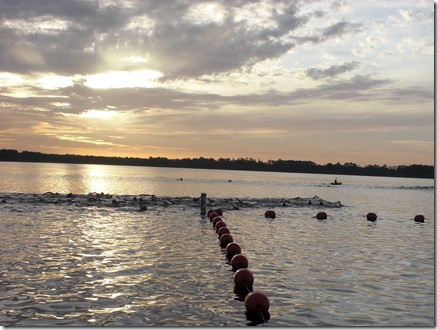 Megan and I pretended to swim with Ryan. I much prefer swimming on dry land! 🙂 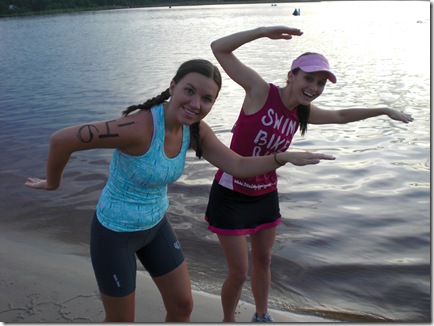 And then…. suddenly Ryan was BACK! She was SO fast. She swam 1.5K in about 25 minutes, 43 seconds — I was floored at her speed! I cheered so loudly for her as she came out of the water and ran towards transition. The run into transition took her 2 minutes, 10 seconds. 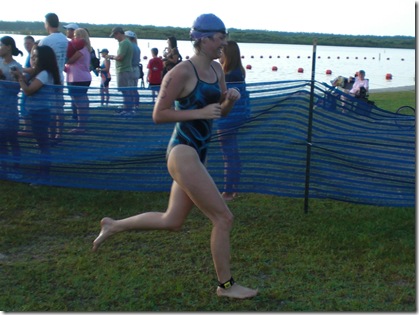 I pretty much pavarazzi-ed her all the way to the transition zone. She probably felt like a famous celebrity triathlete! 🙂 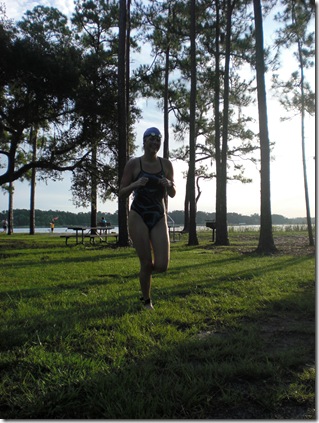 In the transition area, I took the chip off Ryan’s ankle as Megan put her helmet on. Then, I velcro-ed the chip to Megan and she raced off! 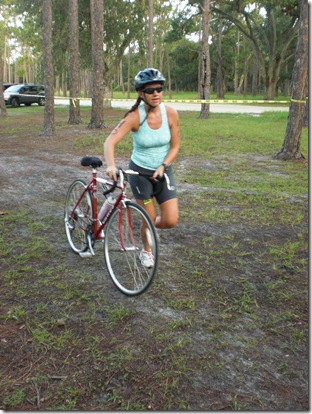 That’s the ONLY non-blurry one I got of Megan on her bike – she was moving pretty fast!

That’s when I spotted another relay team. I tried to psych them out by giving them the evil eye. I don’t think it worked. 🙂 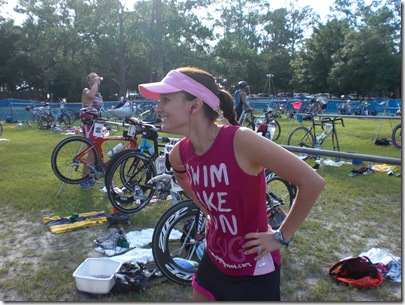 And Ryan changed out of her swimsuit, which had some VERY interesting mud spots! 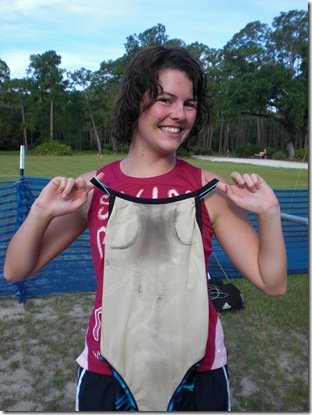 Since it had been 2 hours since breakfast, I drank 1/2 a MyoPlex shake because I could feel myself getting hungry and I didn’t want to be underfueled for the run. 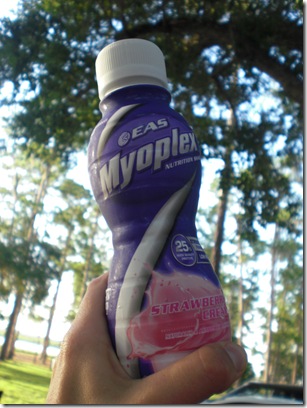 I also taped my knees. 🙂 They feel OK, I am icing them as I type. 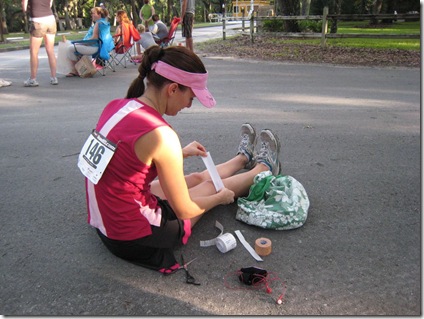 After a 1 hour and 18 minutes ride, Megan came screeching around the corner! She was super fast, too! I grabbed the chip off her ankle, tied it to mine, and off I went! 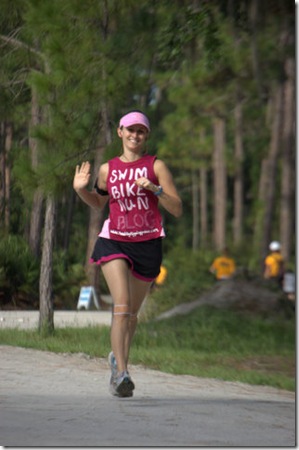 I was a little disappointed because they announced at the beginning of the race that the run distance had been extended from 5.15 miles to 5.6 miles. Normally, that wouldn’t bother me, but I haven’t run more than 4.0 miles in a long, long time and I already felt like 5.15 was going to be stretch.

I focused on pacing myself and keeping any negative thoughts at bay. It’s so easy to let yourself slip into thinking “This is hard, I am tired, it’s hot, I’m thristy… blah, blah, blah.” Every time I felt myself sinking into that hole, I forced myself to think “This is GREAT! I’m running, I feel strong, this is fun!” 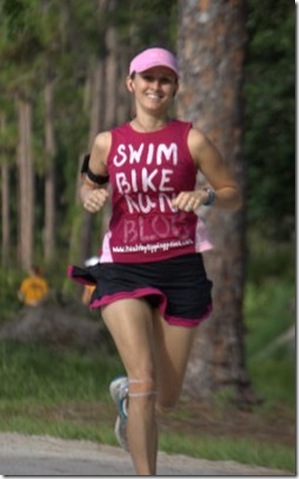 By the time I came around the corner and could see the finish line, I was looking rough AND feeling pretty rough. 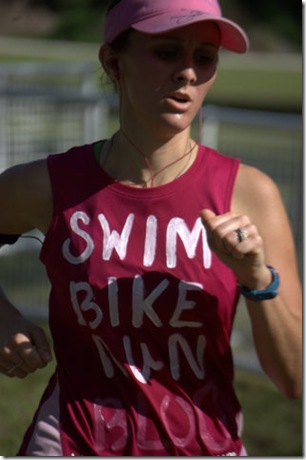 But I finished strong! My offical chip time was 49:49 minutes — under 9:00 minute miles!! I am very proud that I can still run that fast (that’s fast for me!) after 3 months of taking it easy!

Our total time was 2 hours, 37 minutes, and 28 seconds, which was good enough to win our division! 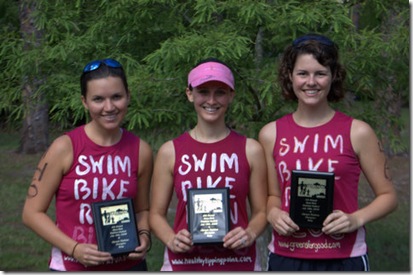 Alright, we were the only ladies IN our division, but a trophy is a trophy! 🙂

After the award ceremony, I ate a banana: 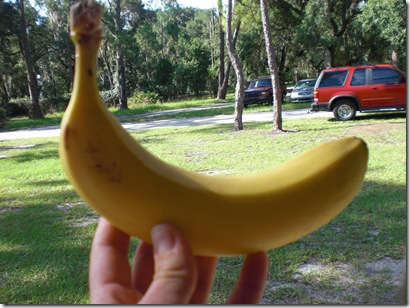 And a slice of pizza: 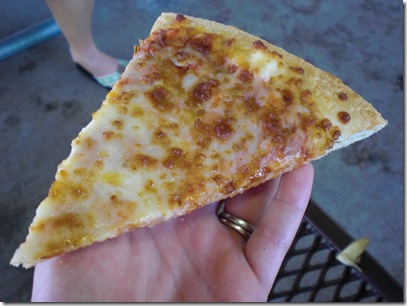 And then said goodbye to everyone, including our awesome spectators (Megan‘s friend Debbie and her boyfriend Mike, and Megan‘s boyfriend Jason): 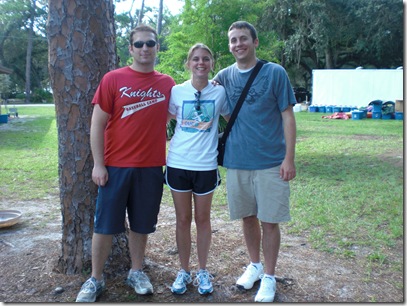 Jason was a great photographer for the race (don’t the pictures look professional?): 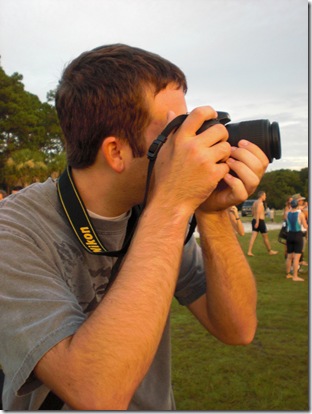 All in all, the Moss Park Triathlon Relay was a FUN experience, and it was a great way to re-introduce myself to racing. It looks like Race Season 2009 – 2010 is going to be very exciting!

Have a WONDERFUL Sunday!