on November 4, 2010
in Other Healthy Tipping Points

It’s that time again – Healthy Tipping Point Success Story Time!  I love sharing other people’s stories about getting fit, finding balance, having children, falling in love, overcoming addiction, discovering their passions, and/or living their life to the fullest.  But HTP stories are generally pretty serious, which is why I think it’s time that I share a more humorous HTP.

Meet Maura – she changed her life, focused on become healthy (mentally and physically), and jumped back into the Santa Monica dating scene.  While looking for love, she found… herself.

Maura says, “My Healthy Tipping Point came in January 2009.  I woke up in the New Year realizing that I was out of shape and had a frown painted on my face most days.   Almost two years later, my pant size has been cut in half.  I dropped meat from my diet, and I became a runner – a sport that I thought was for the "elite."  An activity reserved for someone who is a bad-ass.  Turned out that there was a bad-ass living inside of me, just waiting to come out. 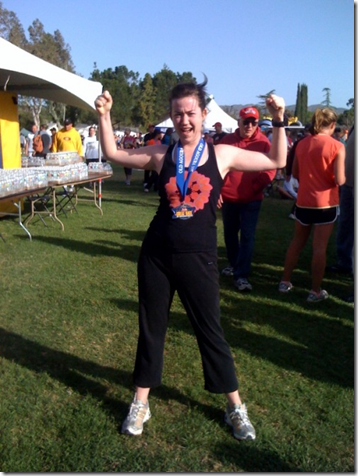 I think this morning’s 4 miler is just another example of how running is not innate. I still need walking breaks. I’m not fast. But really, who cares? I never claim to be Flo-Jo, and I’ve run enough races and miles where I think it’s fair to say I’ve been upgraded to the “bad-ass” status.

The race that flipped my life upside down was the marathon I did in June of this year with Team in Training.  My outlook on charity, cancer, and the ability of the human body and spirit is forever altered.

I cannot tell a lie though. I originally signed up to Team in Training…to meet boys. It’s shameful, right? But here I was having lost 30 pounds, feeling fabu, and hoping to meet a guy to share my new found confidence and athletic passions with. Or hell, even just a date would have sufficed!

You see, I’ve been single for a very. long. time. And looking back its clear why. I’m pretty sure the type of man that I want to attract is not attracted to a woman who enjoys knocking back Patron Silver like it’s going out of stock and spends the weekend sitting on the couch. When you’re slurring your words and not able to stand in your heels without swaying, your chances of attracting a man – at least a quality one – are pretty slim. It ain’t rocket science.

But I seriously cleaned up my act and was now emotionally happy, a bad-ass runner and successful career woman. Unfortunately, I didn’t meet any boys in Team in Training. I was, however, given a life-changing experience. Fair deal to say the least.  :)  But months after the marathon was over, I was left feeling a little dissatisfied. I got healthy, ran 26.2 miles, lost my 2 extra chins, started a blog, and was always smiling…so honestly? WHERE IS HE?

I was posed with the question “Well, what are you doing to be proactive in finding a guy?” My first response was, “Ew. Mind your business.” But after a little self reflection, I realized I could make more of an effort. So I sent a mass email to every girlfriend, basically telling them to rack their brain and set me up. I went on a few dates that I thought went well…but was met with radio silence.

I signed up for Match.com and eHarmony, knowing online dating was now very much a social norm. I “winked” at cute boys. I wrote interesting guys what I thought were interesting emails….and again, was met with radio silence. Seriously, you would have thought my profile headline read, “I cause lots of drama and will cling to your side like a needy puppy dog.” I was baffled.

Now let’s not omit the fact that some men did contact me. Like the one who described himself as – and I do not paraphrase – “a conservative, free-market, liberty-oriented Jewish Republican who only drinks a few times a year, and listens to Rush Limbaugh every morning.”  It wasn’t that he was Jewish and I’m Catholic.  I am a woman of equal opportunity.  You say Shalom, I say Slàinte. That wine’s kosher?  Well pass it down!  It was the “conservative, free-market, liberty-oriented Republican, Rush Limbaugh” thing that did not bode well for my bra-burning ways.  🙂 There’s not enough make-up sex in the world that would allow for the arguments that I’m sure would have ensued!

And let’s not forget this gem that arrived in my inbox one day:

Subject:  I’ll Be Honest With You…

I think you’re beautiful and want to hook up so let me know when you’re free and I can come over to your house text or call me since I don’t come to the site to often.

Take away the fact that Philip is 40, divorced, living with his three children – not an ideal match in my mind.  Or that he doesn’t know how to use correct grammar – even just periods would be nice.   But who says these things to someone they’ve never met?   Dirty, dirty men, that’s who! The same kind of men who include this in their personal photos: 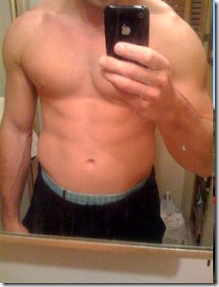 Taken straight from the pages of Match.com.  I swear.

Now listen, I’m a heterosexual female with blood running through my veins. Can I appreciate a nice bod? Of course! But does that make it okay to include this in your set of photos that are supposed to showcase who you are? It’s the equivalent of me bending over and taking a self-portrait of my cleavage. Not. Acceptable.

So online dating, blind dates, set ups – and nothing has panned out. And I live such a rich and full life – overflowing with family, friends, and fun – that on a good day, being single is not a chore, nor all that hard.

But there are days where it’s simply exhausting. Exhausting to know nothing I’ve done has worked thus far. To worry that a guy I do meet will Google-stalk me and find my blog – where I spout off about wanting to find love (that won’t scare him away or anything, right?) To live in LA – a seemingly impossible city to date in, but where my family and life happens to be.

As a 29-year-old woman, I never imagined that I still would be alone. Some days, the fear of never being in love can be stifling. I don’t even attempt to choke back the tears some nights going to bed. Because I refuse to feel bad for wanting love and a relationship.

Want and need are two different things. Do I need a man to lead a full life? No way – my mama raised me better than that! I’ve been forced to understand that life doesn’t come wrapped up in the package that we expected as little girls. And maybe I have years to wait to find my fellow bad-ass.  In the meantime, I have to keep living a healthy, happy life. The more miles I run, the more challenges I tackle, the more I work to exude happiness and confidence…the more I am raising the bar for what I will want and expect in a partner. And that’s a good thing. Mama also raised me to never settle.

Some of us find love at a young age. Some of us didn’t waste time knockin’ back Patron in bars, or leading mentally and physically unhealthy lives, therefore creating a bigger window of possibility to meet someone.   But here I am, finally healthy, living in La La land and waiting it out. And I could either wait in misery, or I could keep striving to become an even healthier, more beautiful, confidant woman. Man or no man, there’s life and love in every nook and cranny, waiting to be found.

And whatever my dating status may be, it never takes away from my status as a bona-fide bad-ass!”

So – my questions for all of you!  Can you relate to Maura’s story? How did you meet your match?  Do you know any single, cute, active men in Los Angeles who are dying to meet a lovely girl like Maura (we’re serious)?